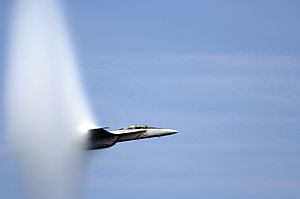 Sometimes the shock wave from a supersonic airplane is visible 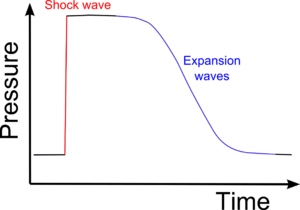 The shock wave can be so powerful that it can knock things over. For example, bombs create shock waves. A shock wave can be destructive because it vibrates the material around the point in an extremely hard and fast wave, which causes other things that the material touches to vibrate too, and even make them explode. Shock waves make bombs more dangerous and sometimes are the most dangerous part of an explosion. However, the shock wave moves much faster than the rest of the bomb's energy, and fades away quickly. It is called a shock wave, and not simply a shock, because the force goes up and down, like an ocean wave.

A shock wave can move through any material. An earthquake is a shockwave traveling through the ground. Shock waves can also be felt in water. A shock wave is affected by the materials it travels through, and different materials have different effects. A thick material, like water, might help the shock wave travel further, where as a thin material, like air, would not. This is similar to the way that sound waves are affected by what they move through, but sound waves and shock waves are not the same.

A sound wave is similar to a shock wave in the way it looks, but the two are not the same. While a sound wave can be described as the ripples created when you drop a small rock in a bucket of water, a shock wave is faster and not as smooth. If you were to draw a picture of a perfect sound wave, it would be a smooth line, up and down by the same amount. If you were to draw a picture of a shock wave, it would be like many big bumps on a road - the line goes up very quickly, but it does not go down as much. Some of the words people use to talk about sound waves and shock waves are the same, like amplitude or frequency, but this does not mean that they are the same.

All content from Kiddle encyclopedia articles (including the article images and facts) can be freely used under Attribution-ShareAlike license, unless stated otherwise. Cite this article:
Shock wave Facts for Kids. Kiddle Encyclopedia.