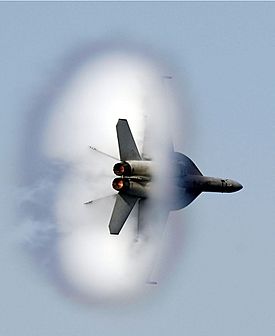 The term supersonic is used to describe a speed that is over the speed of sound (Mach 1). At a normal temperature like 70 degrees Fahrenheit (21.1 °C), the speed needed for something to be traveling at a faster than sound speed is about 344 m/s, 1,129 ft/s, 770 mph or 1,238 km/h. Speeds faster than 5 times the speed of sound are sometimes called hypersonic. Speeds where only some parts of the air around an object (like the propeller) reach supersonic speeds are called transonic (normally somewhere between Mach 0.8 and Mach 1.2).

Whips have operated supersonically for many centuries. Artillery became supersonic in the 19th century.

It can be very hard to reach supersonic speeds, because drag increases a lot near these speeds. This slows a plane, and for years made control difficult. These problems were called the "sound barrier". Jet engines and other developments solved the problems in the middle 20th century.

All content from Kiddle encyclopedia articles (including the article images and facts) can be freely used under Attribution-ShareAlike license, unless stated otherwise. Cite this article:
Supersonic Facts for Kids. Kiddle Encyclopedia.