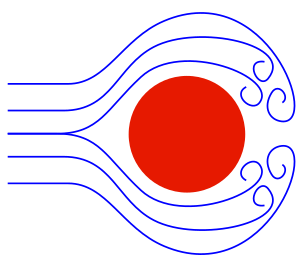 In fluid dynamics, drag (sometimes called resistance) is a force which tends to slow the movement of an object through a liquid or gas. As a moving object pushes the liquid or gas out of its way, the fluid pushes back on the object. This drag force is always opposite to the object's motion, and unlike friction between solid surfaces, the drag force increases as the object moves faster.

Air resistance, also known as drag, is a force that is caused by air, the force acts in the opposite direction to an object moving through the air. It is where air particles hit the front of the object slowing it down. The more surface area, the more air particles hit it and the greater the resistance. For example, a truck with a flat front will experience high air resistance while a sports car with a streamlined shape will experience lower air resistance, allowing the car to go faster. This is why airplanes and other fast machines are streamlined. A snowflake falls more slowly than does a drop of water of the same weight.

Drag can affect the quickest falling speed (the terminal velocity) of an object. The higher the drag, the slower the object falls.

All content from Kiddle encyclopedia articles (including the article images and facts) can be freely used under Attribution-ShareAlike license, unless stated otherwise. Cite this article:
Drag (physics) Facts for Kids. Kiddle Encyclopedia.