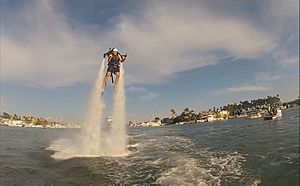 Flying with a water jet

A jet engine is a type of air-breathing turbine engine, often used on aircraft. The principle of all jet engines is essentially the same. The engine draws air in at the front and compresses it. The air then combines with fuel and the engine burns the resulting mixture. The combustion greatly increases the volume of the gases which are then exhausted out of the rear of the engine.

The process is similar to a four-stroke cycle, induction, compression, ignition and exhaust - taking place continuously. The engine generates thrust because of the acceleration of the air through it - the equal and opposite force this acceleration produces (Newton's third law) is thrust.

The advantage of the jet engine is its efficiency at high speeds (especially supersonic speeds) and high altitudes. On slower aircraft, a propeller (powered by a gas turbine), commonly known as a turboprop is more common. Very small aircraft generally use conventional piston engines to drive a propeller. 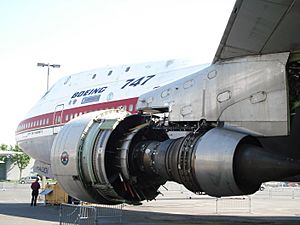 A JT9D turbofan jet engine installed on a Boeing 747 aircraft

Jet engine designs are frequently modified for non-aircraft applications, as industrial gas turbines or marine powerplants. These are used in electrical power generation, for powering water, natural gas, or oil pumps, and providing propulsion for ships and locomotives. Industrial gas turbines can create up to 50,000 shaft horsepower.

Jet engines are also sometimes developed into, or share certain components such as engine cores, with turboshaft and turboprop engines, which are forms of gas turbine engines that are typically used to power helicopters and some propeller-driven aircraft.

There are a large number of different types of jet engines, all of which achieve forward thrust from the principle of jet propulsion.

All content from Kiddle encyclopedia articles (including the article images and facts) can be freely used under Attribution-ShareAlike license, unless stated otherwise. Cite this article:
Jet engine Facts for Kids. Kiddle Encyclopedia.