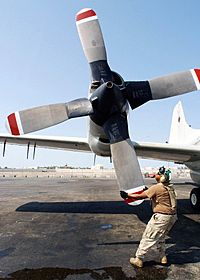 A propeller makes an aircraft, ship, or submarine in water or air go by making a big wind or a strong stream. It does this by turning two or more wings very quick. The blades of a propeller act as rotating wings, and produce force through application of both Bernoulli's principle and Newton's third law, generating a difference in pressure between the forward and rear surfaces of the airfoil-shaped blades.

The twisted aerofoil shape of modern aircraft propellers was pioneered by the Wright brothers. While some earlier engineers had attempted to model air propellers on marine propellers, the Wrights realized that a propeller is essentially the same as a wing, and were able to use data from their earlier wind tunnel experiments on wings. They also introduced a twist along the length of the blades. This was necessary to ensure the angle of attack of the blades was kept relatively constant along their length. Their original propeller blades were only about 5% less efficient than the modern equivalent, some 100 years later. The understanding of low speed propeller aerodynamics was fairly complete by the 1920s, but later requirements to handle more power in smaller diameter have made the problem more complex.

Alberto Santos Dumont, another early pioneer, applied the knowledge he gained from experiences with airships to make a propeller with a steel shaft and aluminium blades for his 14 bis biplane. Some of his designs used a bent aluminium sheet for blades, thus creating an airfoil shape. They were heavily undercambered, and this plus the absence of lengthwise twist made them less efficient than the Wright propellers. Even so, this was perhaps the first use of aluminium in the construction of an airscrew.

All content from Kiddle encyclopedia articles (including the article images and facts) can be freely used under Attribution-ShareAlike license, unless stated otherwise. Cite this article:
Propeller Facts for Kids. Kiddle Encyclopedia.