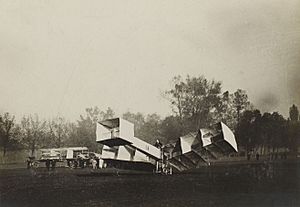 The Santos-Dumont 14-bis was a biplane invented in the early 1900s by Alberto Santos-Dumont. In the fall of 1906, it became the first airplane to fly in Europe.

Santos-Dumont tried several times before he truly managed to fly in the 14-bis. His first attempt in July 1906 did not work. In September, he managed two short hops. In October, the 14-bis flew for 50 meters. That was the first flight that the Aero Club of France ever officially witnessed. In November, he was able to keep the 14-bis in the air for 220 meters, 6 meters up in the air.

According to the Aero Club of France, the 14-bis was 40 feet wide from wingtip to wingtip, 33 feet wide, and weighed 352 pounds. It used an Antoinette engine. It was made out of pine and and bamboo with aluminum to keep it together. Its wings were made out of silk cloth.

The 14-bis had three different sets of controls so Alberto Santos-Dumont could steer. Some were tied to his shoulders so that he looked like he was dancing or shaking while in the air.

No one knows where the original 14-bis from the fall of 1906 is now. Experts think Santos-Dumont took it apart and used the pieces to build other airplanes.

All content from Kiddle encyclopedia articles (including the article images and facts) can be freely used under Attribution-ShareAlike license, unless stated otherwise. Cite this article:
Santos-Dumont 14-bis Facts for Kids. Kiddle Encyclopedia.