Rio de Janeiro is in the Southeast Region of Brazil. It shares borders with Minas Gerais, Espírito Santo and São Paulo as well as the Atlantic Ocean. Rio de Janeiro has an area of 43,653 square kilometres (16,855 sq mi). 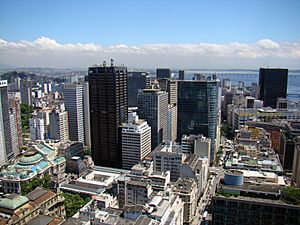 European presence in Rio de Janeiro is as old as Brazil itself, dating back to 1502. Rio de Janeiro originated from parts of the captainships of de Tomé and São Vicente. Between 1555 and 1567, the territory was occupied by the French, who intended to install a colony, France Antarctique. Aiming to prevent the occupation of the Frenchmen, in March 1565, the city of Rio de Janeiro was established by Estácio de Sá.

In the 17th century, cattle raising and sugar cane cultivation stimulated the city's progress, which was definitively assured when the port started to export gold extracted from Minas Gerais in the 18th century. In 1763, Rio de Janeiro became the capital of Colonial Brazil. With the flight of the Portuguese royal family from Portugal to Brazil in 1808, the region soon benefited from urban reforms to house the Portuguese. Chief among the promoted changes were: the transformation of agencies of public administration and justice, the creation of new churches, and hospitals, the foundation of the first bank of the country - the Banco do Brasil - and the Royal Press, with the Gazette do Rio of Janeiro. The following years witnessed the creation of the Jardim Botânico (Botanical Garden) and the Academia Real Militar.

There followed a process of cultural enhancement influenced not only by the arrival of the Royal Family, but also by the presence of European graphic artists who were hired to record the society and Brazilian natural features. During this same time, the Escola Real de Ciências, Artes e Ofícios (The Royal School of Sciences, Arts, and Works) was founded as well. 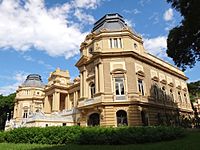 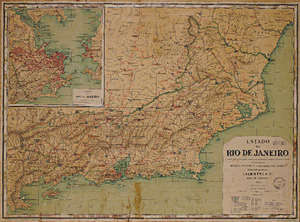 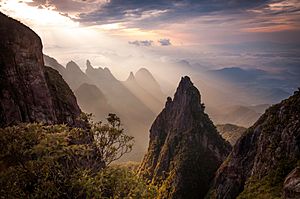 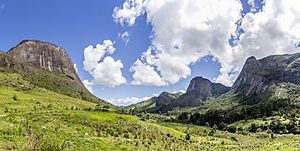 The state is part of the Mata Atlântica biome and is made up of two distinct morphological areas: a coastal plain, known as baixada, and a plateau, which are disposed in parallel fashion from the shoreline on the Atlantic Ocean inland towards Minas Gerais.

The coastline extends 635 kilometers and is formed by the bays of Guanabara, Sepetiba, and Ilha Grande. There are prominent slopes near the ocean, featuring also diverse environments, such as restinga vegetation, bays, lagoons and tropical forests.

Most of the state however consists of highlands, often higher than 1000 m, formed by several mountain chains like the Serra do Mar which separates Rio from the state of São Paulo. The highest point of the state, the Pico das Agulhas Negras (Black Needles Peak) is located in the Serra da Mantiqueira which forms the physical border with neighbouring Minas Gerais.

Its principal rivers are the Guandu, the Piraí, the Paraíba do Sul, the Macaé and the Muriaé.

Tropical forests used to cover more than 90% of the territory of Rio; large portions were devastated for urbanization and for plantations (coffee, sugar cane); preserved areas can be found in the steepest parts of the mountain chains.

The state's tropical coast and river areas are the only remaining habitat of the golden lion tamarin. 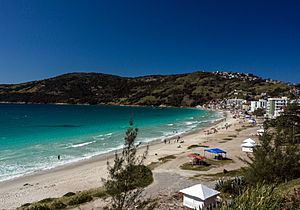 The entire state is located within the tropics (the Tropic of Capricorn passes just a few kilometers south of the state's southernmost point) so a tropical climate is predominant. However, due to altitude, temperatures can drop to freezing point or below in some parts. Frost is not uncommon in some mountainous cities such as Teresópolis, Nova Friburgo and Petrópolis and snow has been reported occasionally in the Itatiaia National Park. 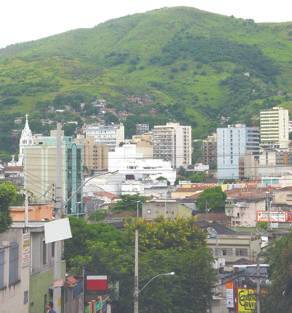 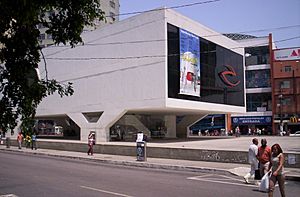 The occasion of the last five days leading up to Lent is annually cause for a great explosion of joy in Rio – a round-the-clock party uniting emotions, creativity, plasticity, colours, sounds and much fantasy. It is the greatest popular party in the world, a unique record of the rich cultural melting pot typical of Brazil. 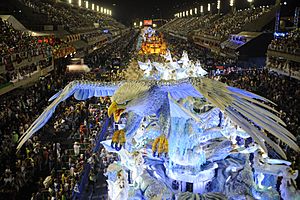 Carnival in Rio de Janeiro, famous for its production.

In Rio, it is celebrated in various ways, most famously through the elaborate competition of samba schools comprising thousands of dancers in each school, each of which has composed a new "enredo de samba" (samba script) for the year that is released and popularized by the time Carnaval arrives, thus already recognizable for its lyrics, themes, and rhythms by the energized audience in the bleachers thronging to see the all-night competition of one samba school after another until dawn. Each samba school consists of 'alas' (wings) of samba dancers costumed to carry out one aspect of the theme of the song they all sing. This event began in the 1930s as a diversion for what politicians sought to assuage as an otherwise restive populace. It came to be held on the bleacher-lined Marques du Sapucai for decades until a covered sambadrome was built in the 1980s.

In other parts of the city, Carnaval festivities include the Banda de Ipanema, a street parade of transvestite costuming that draws its throngs of revelers to the streets of Ipanema. In the city center on the final night of Carnaval, into the wee hours of Quarta Cinza (Ash Wednesday), a very different flavor of street parade is provided by Quilombo (the word given to slave refugee colonies) with authentic African costuming. For others, Carnaval is a time of clubbing in costume in more exclusive locales in the Zona Sul.

The film Black Orpheus is set in the context of Carnaval in Rio. 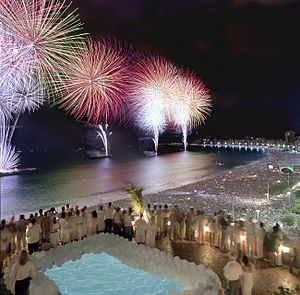 In Rio de Janeiro, a globally unique New Year's Eve celebration involves the whole city population. Local inhabitants and visitors join in flocking to the ocean to celebrate the night of the year when thanks are given and wishes are made to the goddess of the sea, Iemanja. In honor of her traditional garb, celebrants dress in white and bear gifts like flowers, especially white, and even blancmange. At midnight, beachgoers on the typically hot midsummer night, walk into the surf and cast their flowers (and wishes for the coming year) on the lapping waves to be carried out to honor the goddess (the tradition says that wishes will turn to reality if the waves take the gifts to the sea, and won't if the gifts come back to the beach). Nearby parties, concerts and music last into the dawn, many choosing to sleep it off on the beach on New Year's Day. In recent years, campfires and the oral tradition of shared stories around statues of Iemanja has modernized into massive fireworks displays and to a mega-concert on the famous beach of Copacabana.

All content from Kiddle encyclopedia articles (including the article images and facts) can be freely used under Attribution-ShareAlike license, unless stated otherwise. Cite this article:
Rio de Janeiro (state) Facts for Kids. Kiddle Encyclopedia.