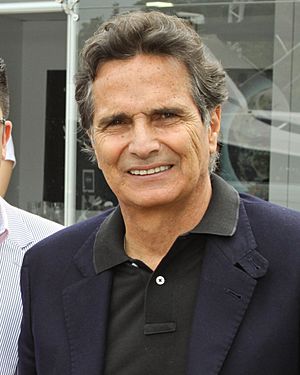 Nelson Piquet Souto Maior, born August 17, 1952), known as Nelson Piquet, is a Brazilian former racing driver and businessman. Since his retirement, Piquet has been ranked among the greatest Formula One drivers in various motorsport polls.

Piquet had a brief career in tennis before losing interest in the sport and subsequently took up karting and hid his identity to prevent his father discovering his hobby. He became the Brazilian national karting champion in 1971-72 and won the Formula Vee championship in 1976. With advice from Emerson Fittipaldi, Piquet went to Europe to further success by taking the record number of wins in Formula Three in 1978, defeating Jackie Stewart's all-time record.

In the same year, he made his Formula One debut with the Ensign team and drove for McLaren and Brabham. In 1979, Piquet moved to the Brabham team and finished the runner-up in 1980 before winning the championship in 1981. Piquet's poor performances in 1982 saw a resurgence for 1983 and his second world championship. For 1984–85, Piquet had once again lost chances to win the championship but managed to score three wins during that period. He moved to the Williams team in 1986 and was a title contender until the final round in Australia. Piquet took his third and final championship in 1987 during a heated battle with teammate Nigel Mansell which left the pair's relationship sour. Piquet subsequently moved to Lotus for 1988–89 where he experienced his third drop in form. He eventually went to the Benetton team for 1990-91 where he managed to win three races before retiring.

After retiring from Formula One, Piquet tried his hand at the Indianapolis 500 for two years. He also had a go at sports car racing at various points during and after his Formula One career. Piquet is currently retired and runs several businesses in Brazil. He also manages his sons Nelson Piquet Jr. and Pedro Piquet, who are also professional racing drivers.

He is one of the few men to win at least three world championships in the history of Formula One. The others are Jack Brabham, Jackie Stewart, Niki Lauda, Ayrton Senna (3 each), Alain Prost (4), Juan Manuel Fangio (5), and Michael Schumacher (7).

All content from Kiddle encyclopedia articles (including the article images and facts) can be freely used under Attribution-ShareAlike license, unless stated otherwise. Cite this article:
Nelson Piquet Facts for Kids. Kiddle Encyclopedia.