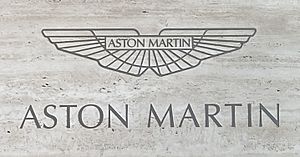 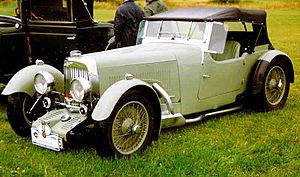 Aston Martin Lagonda Limited is a luxury car company that was started in 1913 by Lionel Martin and Robert Bamford.

The company name is derived from the Aston Clinton hill climb and one of the company's founders, Lionel Martin.

David Brown sold the company again. The company was having trouble staying open in the 1970s. Victor Gauntlett bought part of the company and kept it going with help from buyers of other parts of the company. In 1991 the Ford Motor Company bought Aston Martin and started making DB cars again. Ford owned Aston Martin until 2007 when they sold it to Investment Dar and Adeem Investments.

All content from Kiddle encyclopedia articles (including the article images and facts) can be freely used under Attribution-ShareAlike license, unless stated otherwise. Cite this article:
Aston Martin Facts for Kids. Kiddle Encyclopedia.