The town was first mentioned in the Domesday Book of 1086 as Neuport, Old English for "New Market Town", but by that time the old Anglo-Saxon town was dominated by the Norman invaders. The suffix "Pagnell" came later when the manor passed into the hands of the Pagnell (Paynel) family. It was the principal town of the Three Hundreds of Newport, a district that had almost the same boundary as the modern Borough.

At one time, Newport Pagnell was one of the largest towns in the County of Buckinghamshire (the assizes of the County were occasionally held there) though today, despite its own substantial expansion, it has been completely dwarfed by the growth of Milton Keynes. There were also at one time two hospitals in Newport Pagnell and six fairs were held for the townsfolk throughout the year.

Tickford Bridge, over the River Ouzel (or Lovat), was built in 1810 and is the only iron bridge in Britain that still carries main road traffic. There is a plaque near the footbridge at the side that gives details of its history and construction placed there by Newport Pagnell Historical Society.

Between 1817 and 1864, the town was linked to the Grand Junction Canal at Great Linford via the Newport Pagnell Canal.

From 1954, until recently, Tickford Street in the town was the home to the prestigious sports car manufacturer Aston Martin. The Newport Pagnell factory was considered outdated and a new production facility was built near Gaydon, in Warwickshire. There is still a service facility in Newport Pagnell, but the factory on the north side of Tickford St has since been demolished apart from the engine shop, board room and offices that are listed buildings. The land behind these has been purchased by Tesco and the supermarket giant had planned to build an outlet on the site, preserving the original remaining buildings for use by the townspeople. In 2012 the service facility was completely modernised and now also houses a bespoke sales department.

The town is also home to the only remaining vellum manufacturer in the United Kingdom, William Cowley, located at Parchment Works, 97 Caldecote Street.

The modern civil parish of Newport Pagnell stops at the M1, but the ecclesiastical parish extends to include Broughton and Caldecote. The parish church is dedicated to St Peter and St Paul. 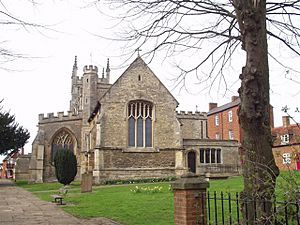 Although Newport Pagnell is outside the designated area of Milton Keynes, its growth has been at a similar level to that of the constituent towns of the latter; the two now join at the M1 and there is little distinction between them. The Office for National Statistics regards Newport Pagnell as part of the Milton Keynes Urban Area. Its population in 1971 was 6,000: by 2001 it had reached 15,020. The Borough Council projects that the population will remain broadly stable at this level. However, in its comments on the expansion plans for Milton Keynes, Buckinghamshire County Council challenges this assumption, calling for any further expansion to be to the east of the M1 rather than south across the border into Aylesbury Vale.

The people of Newport Pagnell are known as Pagnellions.

Newport Pagnell has a Non-League football team Newport Pagnell Town F.C., nicknamed the Swans, who play at The Pavilion on Willen Road. An ITF Taekwon-Do club Kicks Taekwon-Do Academy, who train out of Cedars Primary School, Bury Street, and a swimming pool.

All content from Kiddle encyclopedia articles (including the article images and facts) can be freely used under Attribution-ShareAlike license, unless stated otherwise. Cite this article:
Newport Pagnell Facts for Kids. Kiddle Encyclopedia.