Bedford is the county town of Bedfordshire, England. It had a population of 166,252 in 2015 together with Kempston.

Bedford was founded at a ford on the River Great Ouse, and is thought to have been the burial place of Offa of Mercia. Bedford Castle was built by Henry I, although it was destroyed in 1224. Bedford was granted borough status in 1165 and has been represented in Parliament since 1265. It is well known for its large population of Italian descent.

The name of the town is thought to derive from the name of a Saxon chief called Beda, and a ford crossing the River Great Ouse. Bedford was a market town for the surrounding agricultural region from the early Middle Ages The Anglo-Saxon King Offa of Mercia was buried in the town in 796 but his tomb was soon lost to the river. In 886 it became a boundary town separating Wessex and Danelaw. It was the seat of the Barony of Bedford. In 919 Edward the Elder built the town's first known fortress, on the south side of the River Great Ouse and there received the area's submission. This fortress was destroyed by the Danes. William II gave the barony of Bedford to Paine de Beauchamp who built a new, strong castle.

Bedford traces its borough charter in 1166 by Henry II and elected two members to the unreformed House of Commons. It remained a small agricultural town, with wool being an important industry in the area for much of the Middle Ages. The new Bedford Castle was razed in 1224 and today only a mound remains. From the 16th century Bedford and much of Bedfordshire became one of the main centres of England's lace industry, and lace continued to be an important industry in Bedford until the early 20th century. In 1660 John Bunyan was imprisoned for 12 years in Bedford Gaol. It was here that he wrote The Pilgrim's Progress. The River Great Ouse became navigable as far as Bedford in 1689. Wool declined in importance with brewing becoming a major industry in the town. The 19th century saw Bedford transform into an important engineering hub. In 1832 gas lighting was introduced, and the railway reached Bedford in 1846. The first corn exchange was built 1849, and the first drains and sewers were dug in 1864.

The town of Kempston is adjacent to Bedford, as are the villages of Elstow, Renhold and Ravensden. Wixams is a new town which is being developed to the south of Bedford. Villages in the Borough of Bedford with populations of more than 2,000 as of 2005 were Biddenham, Bromham, Clapham, Elstow, Oakley, Sharnbrook, Shortstown, Wilstead, and Wootton. There are also many smaller villages in the borough. The villages in the borough are popular with commuters to Bedford, and also with people who commute to Milton Keynes, London and towns in Northamptonshire and Cambridgeshire.

Nearby small towns include Ampthill, Biggleswade, Flitwick, and Sandy, all of which are in Central Bedfordshire, as well as Rushden in Northamptonshire and St Neots in Cambridgeshire. The nearest towns and cities with larger populations than Bedford are Northampton to the north west, Cambridge to the east, Milton Keynes to the south west, and Luton to the south, all of which have urban area populations of 150,000 or more.

River Great Ouse in Bedford from Town Bridge, looking downstream. The old Coaching Inn, the Swan Hotel is on the left behind the tree. Bedford Rowing Club and the multistorey Bedford Park Inn are on the right.

As with the rest of the United Kingdom, Bedford has a maritime climate, with a limited range of temperatures, and generally even rainfall throughout the year. The nearest Met Office weather station to Bedford is Bedford (Thurleigh) airport, about 6.5 miles north of Bedford town centre at an elevation of 85 metres. Since 1980, temperature extremes at the site have ranged from 35.9 °C(97F) in August 2003 and 35.3 °C(95F) during July 2006 down to −15.3 °C(4F) in January 1982. However, such extremes would likely be superseded if longer term records were available – Historically, the nearest weather station to Bedford was Cardington about 2.4 miles south south east of the town centre with an elevation of 30 metres. This location recorded a minimum of −18.3 °C(-1F) during January 1963.

Sunshine at around 1500 hours a year is typical of inland areas of southern-central England.

Bedford is home to one of the largest concentrations of Italian immigrants in the United Kingdom. According to the 2001 census, almost 30% of Bedford's population were of at least partial Italian descent. This is mainly as a result of labour recruitment in the early 1950s by the London Brick Company from Southern Italy. Bedford's Little Italy feel is enhanced by a wide variety of Italian bars, restaurants and social clubs throughout the town, as well as a large number of delis and grocery shops selling Italian and continental produce – and by the large Italian mission church run by the Scalabrini Fathers order. From 1954 to 2008 Bedford had its own Italian vice-consulate.

In addition to Italian immigrants, Bedford has also been the recipient of significant immigration from South Asia (8.1% of Bedford's population; Indians began arriving from the late 1950s onwards from the Punjab area & many worked at the London Brick Company), Eastern Europe (particularly in the 2000s), Greece, Cyprus, the Middle East and Africa (3% of Bedford's population is of Sub-Saharan descent), making it one of the most ethnically and linguistically diverse towns in the United Kingdom in proportion to its size.The population of Bedford together with Kempston is 107,590, but it is 163,924 for the urban area. 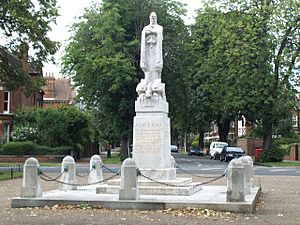 The River Great Ouse passes through the town centre and is lined with gardens known as the Embankment. Within these gardens, opposite Rothsay Road, stands a war memorial to the men of the town killed in the First World War. The memorial was designed in 1921 by the sculptor Charles Sargeant Jagger and depicts a knight killing a dragon. The inscription reads

Bedford Castle Mound is the remnant of Bedford's medieval castle, located close to the centre of the modern town, less than a hundred yards from Bedford Bridge and the High Street. In around 2000 Bedford Borough Council built a sloping retaining wall on the south side, facing the river. Although almost completely modern, the wall does incorporate a few pieces of historic masonry. A paved path leads round the side of the mound up to the top, which is a flat circular grassy area. A small wooden structure of the same date at the top of the wall, much like a bus shelter, protects tourists from the rain while they view the river embankment. 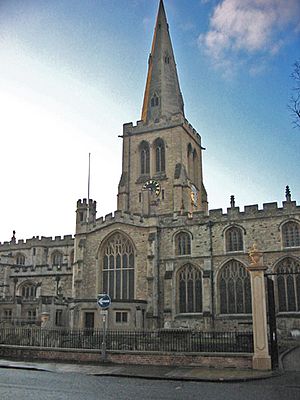 Bedford's principal church is St Paul's, in the square of the same name at the historic centre of the town. It is the Civic Church of the Borough of Bedford and County of Bedfordshire and has a tall, iconic spire which is one of the dominant features of the town. There was an early Minster church on the site by 1066 and work on the present structure began in the early 13th century, but little remains from that period. John Bunyan and John Wesley both preached in the church. In 1865–1868 the tower and spire were completely rebuilt and the two transepts added and lesser alterations have been made since. From 1941 to the end of the Second World War the BBC's daily service was broadcast from St. Paul's. Another notable local church is St Peter's, on St Peter's Street, which contains some of the oldest architectural remains in Bedford, the most ancient being the two monoliths.

Bedford Park is the town's largest urban park and is located directly to the north of the town centre. The park retains many original features from its Victorian design and construction, including a cricket pavilion and bandstand which are both still in use. Priory Country Park is a large country park located on the northern bank of the River Great Ouse in eastern Bedford. Both parks have been awarded Green Flag status.

Just outside the town lie the Cardington airship hangars. The hangars have been used to shoot scenes for movies such as Batman Begins, The Dark Knight, and Inception. The hangars can be seen from the Bedford Bypass.

Despite being far upriver from the sea, seals have occasionally been reported as swimming as far inland as Bedford.

View of the Bedford skyline, taken from Renhold in 2013.

Transport in Bedford provides links between the town and other parts of England. Road access to the town is provided by the A6 road. The town is served by two railway stations and a network of bus services. 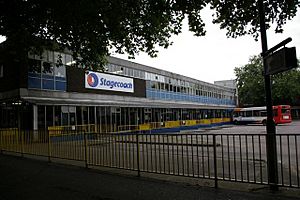 Bedford bus station serves the town of Bedford, The bus station is part owned by the Stagecoach in Bedford and Bedford Borough Council and is situated in the town centre on All Hallows just off Greyfriars. 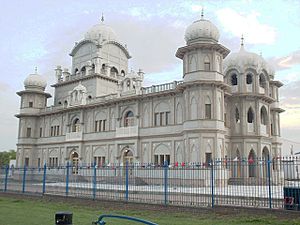 The town has a high number of Christian churches: including the Civic and County Church of St Paul's and the Church of St Peter's, both already noted above. There are also four from the Newfrontiers network, several Polish and Italian Roman Catholic churches, LDS (Mormon) meetinghouses, and various independent churches that cater to the different ethnic and language groups. There are also four mosques located in the town.

Bedford has the largest Sikh temple in the United Kingdom outside London, alongside two other Sikh temples; one of which is in Kempston. Bedford also has Guru Ravidass and Valmiki temples.

There are also Quaker, Jehovah's Witness and Wiccan communities who meet in the town. There is no longer a synagogue in Bedford, but Bedfordshire Progressive Synagogue, based in Luton, meets in Bedford once a month for the town's Jewish community. The nearest Orthodox synagogue is the Luton Hebrew Congregation, a Lubavitch synagogue in Luton. Bedford is also the former headquarters of the Panacea Society who believed that the town would have an important role in the Second Coming of Jesus Christ, and also that Bedford was the original location of the Garden of Eden. 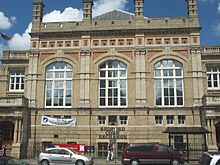 The Higgins Art Gallery & Museum, Bedford is housed in the recreated Victorian home of the Higgins family of Victorian brewers and in a modern extension. The museum has local history collections, while the galleries have notable collections of watercolours, prints and drawings, ceramics, glass and lace.

The Panacea Museum tells the story of the Panacea Society, a religious community formed in the early twentieth century.

The Bedford Corn Exchange is the largest entertainment venue in the town and plays host to a variety of performances, meetings, conferences, concerts and private functions. The venue has been host to many great entertainers such as Glenn Miller and Bob Hope.

The University of Bedfordshire Theatre is the largest theatre in Bedford and hosts many larger productions as well as projects from the university. There is an active amdram (community theatre) scene, with groups such as the Swan Theatre Company, Bedford Drama Company (formerly Bedford Dramatic Club), Bedford Marianettes and ShowCo Bedford producing plays and musicals in venues like the Corn Exchange. The Bedford Pantomime Company produces a traditional pantomime at the Bedford Corn Exchange each Christmas. Esquires (one of the town's premier live music venues) regularly plays host to many notable bands and acts from all over the United Kingdom as well as showcasing local live music.

Every two years, an event called the "Bedford River Festival" is held near the river in Bedford during early July. The event lasts for two days and regularly attracts about 250,000 visitors. The event includes sports, funfairs and live music. It is the second largest regular outdoor event in the United Kingdom, beaten in numbers only by the Notting Hill Carnival. The Bedford Regatta each May is Britain's largest one-day river rowing regatta.

Other annual events include "Bedford by the Sea" (when large quantities of sand are deposited in the town centre) and the "Bedford International Kite Festival" in June. "Proms in the Park", held in early August, is a popular musical event.

All content from Kiddle encyclopedia articles (including the article images and facts) can be freely used under Attribution-ShareAlike license, unless stated otherwise. Cite this article:
Bedford Facts for Kids. Kiddle Encyclopedia.