Kempston is a town and civil parish in the Borough of Bedford, Bedfordshire, England. It had a population of 19,330 in the 2011 census. Kempston is part of Bedford's built-up area and is situated directly south-west of Bedford proper. The River Great Ouse separates it from the Queen's Park area of Bedford.

Until the 19th century Kempston was a mainly rural parish. It was one of the largest in Bedfordshire with an area of 5,025 acres (20 km²) at the time of enclosure in 1804, and was in Redbournestoke Hundred. Historically there was no central village, but instead settlement was divided between a number of hamlets called "Ends", for example, Up End, Bell End, Wood End and Box End. Kempston's parish church, All Saints, was in Church End, which was not the largest end but is fairly central. In the 19th century East End, Bell End and Up End began to coalesce into a larger settlement. In 1870 developers began to attempt to develop land on the road from Kempston to Bedford under the name "Kempston New Town". Construction was slow at first, but the new district soon began to expand steadily and Kempston acquired a more urban feel. A permanent military presence was established in the town with the completion of Kempston Barracks in 1876. 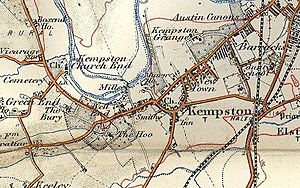 The Urban District was based on East End, Up End and Kempston New Town all of which are in the north eastern part of the parish close to Bedford, and had 86.8% of the total population at the 1901 census. Kempston Rural was three times larger, but remained sparsely populated. Church End, with its original parish church, remains a small hamlet in the rural part of Kempston.

The growth of Kempston's population levelled off in the early decades of the 20th century, with a rise of just 12% between 1901 and 1931, but it then began to expand rapidly. The 1951 population of just under 10,000 was 60% higher than that of 1931; in the second half of the 20th century, the population nearly doubled. In 1974 Kempston Urban District was abolished and Kempston reverted to being a civil parish, in the Borough of Bedford but with a separate town council with minor powers. For borough election purposes the town is divided into four wards called Kempston Central and East, Kempston North, Kempston South and Kempston West. Kempston Rural remains a civil parish and is part of Turvey Ward for borough election purposes.

Note 1: 1981 figures are provisional (more up to date source needed).
Note 2: The 2001 Kempston Urban figure is the combined total for the three urban wards of Kempston East, Kempston North and Kempston South.

The name in its old form is "kemestun" which includes the Brittonic word "cambio" meaning bent or curved. Therefore, the name meant when coined "the enclosed settlement on the bend". The bend was that of the River Great Ouse, noted for its sharp bends upstream of Bedford. It is, however, also possible that "cambita" (the curved one) was the name given to this stretch of the river by the Celtic-speaking population. In this case the name could have developed like that of the river Kembs in the French Department of Haut Rhin. Kempston is also a family name for many individuals from British Ancestry. Kempston was recorded as "camestone" in the Domesday Book and had a 6th-century Anglo Saxon burial site, now home to the Saxon Centre. The meaning of the name Kempston is not known for certain. The element 'ton' is Old English and means a settlement of some sort. The most plausible meaning of the element 'Caemb' is that it was the name of an Anglo-Saxon who owned the settlement. Thus we have the possessive case expressing this relationship by the 's.' The speculation that the element 'Caemb' means bent or curved seems much less likely, because the river consists of many bends and curves and therefore the name would have been of no use in locating a particular settlement.

A short lived greyhound racing track was opened by the Box End (Kempston) Dog Club during 1932. The racing was independent (not affiliated to the sports governing body the National Greyhound Racing Club) and was known as a flapping track, which was the nickname given to independent tracks. Racing continued for just two more years.

Kempston's main park is Addison Howard Park, which is part of the grounds of Grange House, once one of the principal residences in the parish, which survives as flats. This estate was owned in the 1880s by the Howard family (ancestors of the randlord Sir George Herbert Farrar Bt and the current Earl of Lonsdale) proprietors of the Britannia Iron Works in Bedford (opposite Bedford Hospital, and also known as George Fisher Castings, before its closure and demolition in the late 20th century). Scions of the Howard family were also settled at the nearby estates of Clapham Park and Biddenham Manor. Grange House was later donated by the Kempston branch of the Howard family to the people of Kempston. There is an indoor swimming pool which opened in the 1980s. Kempston's Sainsbury's supermarket was the chain's largest branch when it opened in the 1970s. The headquarters of the Bedfordshire Police are in Kempston.

Apart from All Saints' Church, the best-known historic buildings are the King William IV pub and Kempston Barracks. The King William is a timber-framed building in bold black and white. The exterior is 17th century, but it is believed to contain much medieval work.

The Bedford Southern Bypass on the A421, was constructed in the 1990s and links with the Kempston relief road, built in the 1980s. There is an out-of-town shopping centre called Kempston Interchange Retail Park alongside it, and Asda, Argos and Sainsbury's distribution centres have opened at Marsh Leys site since the early 2000s. Formerly, the Sainsbury's warehouse was a Woolworth's distribution centre, until their bankruptcy in 2009. In 2007, work began on the Bedford Western Bypass which opened in 2010. The road cuts through Kempston Rural, crossing the Great Ouse between the urban area and Church End. In 2011 preliminary work began on extending the Western Bypass to join the A6 to the North of Bedford. In 2003 Bedford Borough Council adopted a planning brief for the land close to the Western bypass that proposes the construction of 1,000 new homes. In December 2010 work finished on construction of a new stretch of the A421 from Kempston to Junction 13 of the M1 motorway, this now provides a full dual carriageway link road between the A1 and the M1. The new dual-carriageway runs parallel to the existing road, which will be retained for local use.

Grange Academy, Ridgeway School and St John's School are all located in Kempston. These are special requirements schools for pupils from all over Bedford Borough.

All content from Kiddle encyclopedia articles (including the article images and facts) can be freely used under Attribution-ShareAlike license, unless stated otherwise. Cite this article:
Kempston Facts for Kids. Kiddle Encyclopedia.