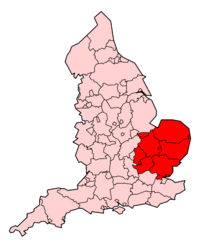 This is the area that the East England Ambulance Service drives to.

The East of England Ambulance Service NHS Trust (EEAST) is the company that provides ambulance services in the counties of Bedfordshire, Cambridgeshire, Essex, Hertfordshire, Norfolk and Suffolk, in the East of England. The service is free, which means people who are hurt do not have to pay money to be driven to a hospital. Under the Patient's Charter every person in the United Kingdom is allowed to use an ambulance if there is an emergency.

The East England Ambulance Service do not only drive people to hospitals, they also help heal people who are injured and are too far from a hospital.

The company was formed on 1 July 2006, when three ambulance companies came together. These companies were the Bedfordshire and Hertfordshire Ambulance and Paramedic Service NHS Trust, the East Anglian Ambulance NHS Trust, and the Essex Ambulance Service NHS Trust. The result was an ambulance service covering an area of over 7,500 square miles (19,000 km2) with a population of 5.8 million people, and one which answers over 500,000 emergency calls every year.

In 2009, the Trust got in trouble by the Care Quality Commission because the ambulances were dirty and the employees did not know how to handle many medical procedures. 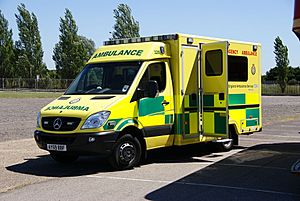 The company has the following vehicles and stations in operation:

The company has a driving school. This school has trained more than 220 employees in emergency driving.

3,994 people work at the ambulance company.

All content from Kiddle encyclopedia articles (including the article images and facts) can be freely used under Attribution-ShareAlike license, unless stated otherwise. Cite this article:
East of England Ambulance Service Facts for Kids. Kiddle Encyclopedia.