North Weald Airfield (ICAO: EGSX) is an operational general aviation aerodrome, in the civil parish of North Weald Bassett in Epping Forest, Essex, England. It was an important fighter station during the Battle of Britain, when it was known as the RAF Station RAF North Weald. It is the home of North Weald Airfield Museum. Although unlicensed it is home to many private aircraft and historic types, and is host to a wide range of events throughout the year, including the Air-Britain Classic Fly-in and smaller airshows.

Royal Flying Corps Station North Weald Bassett aerodrome was established in the summer of 1916 during the First World War by the Royal Flying Corps. Later it became Royal Air Force with effect from Monday 1 April 1918. Its military functions continued to develop during the interwar period, with the building of large hangars and accommodation for Royal Air Force (RAF) personnel. The airfield played an important part in the air defence strategy of the United Kingdom during the Second World War. Initially Hawker Hurricanes were deployed at the airfield, alongside Bristol Blenheim night fighters. The Hurricanes from North Weald saw action over the beaches of Dunkirk and played a key role in the Battle of Britain. In 1940, two American Eagle Squadrons moved into North Weald supplied with Spitfires. A couple of years later, Norwegian squadrons were reassigned to the airfield.

Following the war jet fighter squadrons were based at North Weald. The sight of Gloster Meteors and de Havilland Vampire fighters in the west Essex skies was commonplace from 1949. In the late 1940s and until the mid-60s an Air Training Corps gliding school, latterly No 614 VGS, also operated at North Weald on weekends, teaching cadets up to certificate B. Later the Essex Gliding Club was formed at North Weald and operated for many years until local airspace congestion forced a move to Ridgewell in North Essex.

The last front line combat unit, No. 111 Squadron RAF flying Hawker Hunters, the famous Black Arrows of 22 loop formation fame, left North Weald in 1958. In 1964 the RAF withdrew from the airfield completely. The airfield spent time in both British Army and Royal Navy hands for a short time until in 1979 North Weald became surplus to the Ministry of Defence (MoD) operational requirements and was sold to Epping Forest District Council. 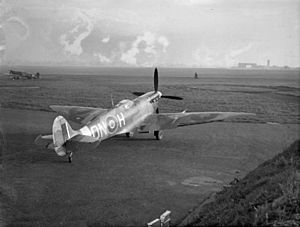 North Weald is a general aviation airfield with just over 20,000 movements per annum, connecting people from London and Essex, with destinations across England and abroad by air travel.

North Weald is home to several vintage and veteran aircraft such as the Spitfire, Mustang, Kittyhawk, Dakota, Skyraider, Seafire and Harvard, and also home to early ex-military jets such as the Hunter, Venom, Vampire, Gnat, Jet Provost, along with general aviation types such as the SportCruiser, Cessna 172, Piper PA28, Aero AT3 and the Cirrus SR22. Resident organizations include Area 51, Hangar 11 Collection, Aces High, and Kennet Aviation.

An original 1927 hangar remains, as does the former Officers Mess, a Grade 2 listed building. Some former married quarters dating from the early 1970s (and now in private ownership) can be seen in Lancaster and York Roads. A Hawker Hurricane Mk1 replica has been erected near the main gate and can be viewed on market days. 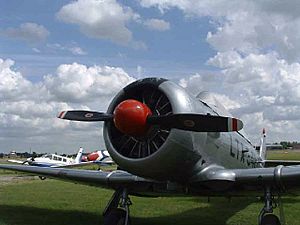 The airfield was granted listed status in 2005.

There is a large Saturday market based on the airfield which draws huge crowds from around Essex and north London. It claims to be one of the largest open air markets in the UK. Bus service 522 operates a frequent service to the market from Harlow, and the service is subsidised by the company that owns the market.

The airfield was used as the transit camp for the 2007 World Scout Jamboree.

In the 1990s, the Aces High hangar was used as the home for Channel 4's TV game show The Crystal Maze, which had moved from Shepperton Studios because of lack of space.

There are two FBOs at North Weald who provide aircraft maintenance and repair, handling and cleaning, refuelling and hangarage services, as well as visitor parking and events organising.

North Weald Flying Services or The Squadron established in 1989, is a licensed general aviation aircraft maintenance company in accordance with EASA Part M Sub Part G, Part 145 and M5. It has a World War II style bar and restaurant for their members, who typically consist of aviators, aircraft enthusiasts, and their guests.

The focus of the North Weald Airfield Museum is the people who worked at RAF North Weald in World War I and World War II, including both service personnel and civilians. Exhibits include photographs, personal memories, and artifacts about the airfield's history, including its role in the Battle of Britain, the American and Norwegian squadrons stationed there in World War II, and the Royal Air Force squadrons stationed there over the years. The museum is located in the former RAF North Weald Station Office, situated just outside the airfield's current perimeter. Visitors can examine military vehicles and historic aircraft.

North Weald Fire Rescue are a private independent fire and rescue service from Great Dunnow in Essex. Their vehicles are based and operated nationwide out of the airfield. Their fleet of vehicles and crews have been in attendance at events at the airfield since 1987. 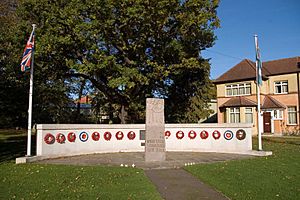 The RAF North Weald Memorial is dedicated to all who served at North Weald. Located near the airfield's main gate, the memorial was dedicated in 2000. The memorial includes an obelisk erected in 1952 by the people of Norway in commemoration of the Norwegian airmen stationed at the airfield in World War II.

Essex & Herts Air Ambulance launched its Hertfordshire service in 2008, based at Hangar 7 on the airfield. From 2008 until 2017, the service operated an MD902 Explorer. From August 2017, Helimed 55 was upgraded to an AgustaWestland AW169 - a £5 million helicopter which the charity fully owns. Two rapid response vehicles as also based here.

The other aircraft operates from Earls Colne Airfield.

On 7 September 2017 it was provisionally agreed by Epping Forest District Council to allow the National Police Air Service to operate 3 helicopters and 1 fixed wing aircraft from North Weald Airfield with a 25-year lease. The facility serves as the main base for police aircraft in the London area and neighbouring counties, replacing the previous London base at Lippitts Hill. Kier Capital Projects commenced work near the airfield's western perimeter late in 2018, and flying operations commenced in the autumn of 2019.

All content from Kiddle encyclopedia articles (including the article images and facts) can be freely used under Attribution-ShareAlike license, unless stated otherwise. Cite this article:
North Weald Airfield Facts for Kids. Kiddle Encyclopedia.