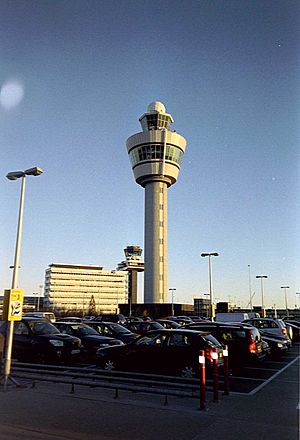 Air traffic control (ATC) is a service provided by ground-based air traffic controllers who direct aircraft on the ground and through controlled airspace, and can provide advisory services to aircraft in non-controlled airspace. The primary purpose of ATC worldwide is to prevent collisions, organize the flow of air traffic, and provide information and other support for pilots. In some countries, ATC plays a security or defensive role, or is operated by the military.

Air traffic controllers monitor the location of aircraft in their assigned airspace by radar and communicate with the pilots by radio. To prevent collisions, ATC enforces traffic separation rules, which ensure each aircraft maintains a minimum amount of empty space around it at all times.

In many countries, ATC provides services to all private, military, and commercial aircraft operating within its airspace. Depending on the type of flight and the class of airspace, ATC may issue instructions that pilots are required to obey, or advisories (known as flight information in some countries) that pilots may, at their discretion, disregard. 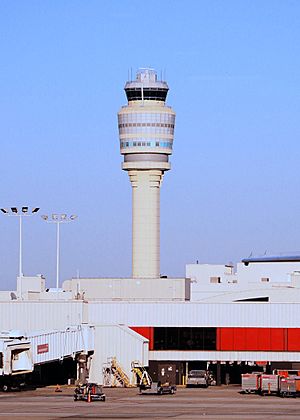 The primary method of controlling the immediate airport environment is visual observation from the airport control tower. The tower is a tall, windowed structure located on the airport grounds. Air traffic controllers are responsible for the separation and efficient movement of aircraft and vehicles operating on the taxiways and runways of the airport itself, and aircraft in the air near the airport, generally 5 to 10 nautical miles (9 to 18 km) depending on the airport procedures.

Surveillance displays are also available to controllers at larger airports to assist with controlling air traffic. Controllers may use a radar system called secondary surveillance radar for airborne traffic approaching and departing. These displays include a map of the area, the position of various aircraft, and data tags that include aircraft identification, speed, altitude, and other information described in local procedures. In bad weather conditions the tower controllers may also use surface movement radar (SMR), surface movement guidance and control systems (SMGCS) or advanced SMGCS to control traffic on the manoeuvring area (taxiways and runway). 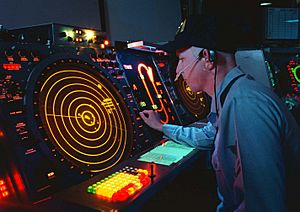 A U.S. Navy air traffic controller watches his radar scope where he works as an Aircraft Approach Controller

The areas of responsibility for tower controllers fall into three general operational disciplines: local control or air control, ground control, and flight data / clearance delivery—other categories, such as Apron control or ground movement planner, may exist at extremely busy airports. Remote and virtual tower (RVT) is a system based on air traffic controllers being located somewhere other than at the local airport tower and still able to provide air traffic control services. Displays for the air traffic controllers may be live video, synthetic images based on surveillance sensor data, or both. 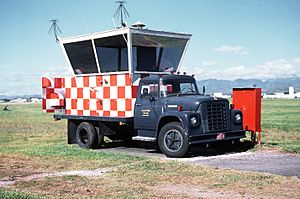 Air control (known to pilots as "tower" or "tower control") is responsible for the active runway surfaces. Air control clears aircraft for takeoff or landing, ensuring that prescribed runway separation will exist at all times. If the air controller detects any unsafe conditions, a landing aircraft may be instructed to "go-around" and be re-sequenced into the landing pattern. This re-sequencing will depend on the type of flight and may be handled by the air controller, approach or terminal area controller.

Within the tower, a highly disciplined communications process between air control and ground control is an absolute necessity. Air control must ensure that ground control is aware of any operations that will impact the taxiways, and work with the approach radar controllers to create "gaps" in the arrival traffic to allow taxiing traffic to cross runways and to allow departing aircraft to take off. Ground control need to keep the air controllers aware of the traffic flow towards their runways in order to maximise runway utilisation through effective approach spacing.

All content from Kiddle encyclopedia articles (including the article images and facts) can be freely used under Attribution-ShareAlike license, unless stated otherwise. Cite this article:
Air traffic control Facts for Kids. Kiddle Encyclopedia.