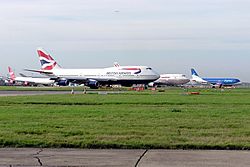 Queue of aircraft for take-off at London Heathrow Airport 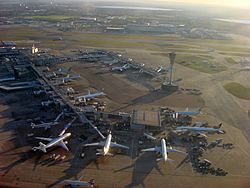 Heathrow is owned and operated by BAA Limited, which also owns/operates six other UK airports and is itself owned by an international group led by the Spanish Ferrovial Group. Heathrow is the main hub of British Airways and Virgin Atlantic.

Heathrow is in the London Borough of Hillingdon, 15 miles (24 km) west of Central London, England, Heathrow has two parallel main runways running east-west and five terminals. The site covers 12.14 square kilometres (4.69 square miles). Terminal 5 was officially opened by Queen Elizabeth II on 14 March 2008 and opened to passengers on 27 March 2008. Construction of Heathrow East to replace Terminal 2 and The Queens Building is planned to start in 2008 and be completed by 2012, and Terminals 3 and 4 will be refurbished during this period. In November 2007 a consultation process began for the building of a new third runway.

Heathrow Airport has a CAA Public Use Aerodrome Licence (Number P527) that allows flights for the public transport of passengers or for flying instruction.

Currently, 1 runway is used for takeoff and another used for landing, depending on the approach path used at the time. Approaching planes are normally cycled between two options at 12 hour intervals in order to reduce noise and environmental impacts for residents. In the future, BAA are considering changing to "Mixed mode" where both runways are used for landing and takeoff. This would boost space.

All content from Kiddle encyclopedia articles (including the article images and facts) can be freely used under Attribution-ShareAlike license, unless stated otherwise. Cite this article:
London Heathrow Airport Facts for Kids. Kiddle Encyclopedia.