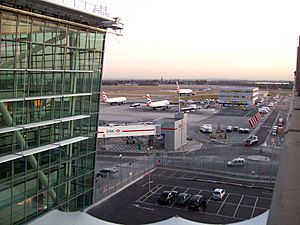 Terminal 5 at London Heathrow Airport, United Kingdom. This is the busiest airport for international passengers. 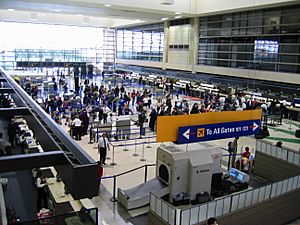 The Tom Bradley International Terminal of Los Angeles International Airport, which handles the most origin and destination (O&D) flights in the world 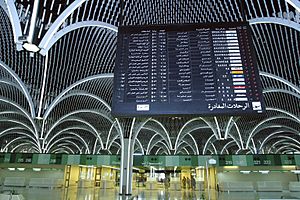 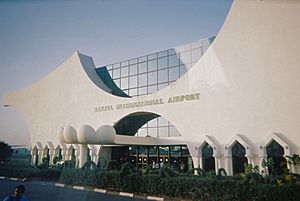 The terminal of Banjul International Airport, Banjul, The Gambia

An airport terminal is a building at an airport. It is where passengers are able to get on and off aircraft. Inside the terminal, passengers can buy tickets, leave or pick up their luggage, and be checked by security staff. The buildings that provide access to the airplanes through gates are usually called concourses. However, the words "terminal" and "concourse" are sometimes used to mean the same thing. Small airports have only one terminal, while large airports can have several terminals and/or concourses. At small airports, the single terminal building usually has all of the functions of a terminal and a concourse.

Most airport terminals are built in a plain style. However, some, such as Baghdad International Airport, are grand monuments, while others are considered architectural masterpieces, such as Terminal 1 at Charles de Gaulle airport near Paris or Terminal 5 at New York's JFK Airport. A few are designed to reflect the culture of an area. The terminal at Albuquerque International Sunport in New Mexico, is designed in the Pueblo Revival style made popular by architect John Gaw Meem. The terminal at Bahías de Huatulco International Airport in Huatulco, Oaxaca, Mexico, which features some palapas that are interconnected to form the airport terminal. 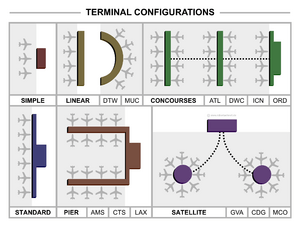 Many early terminals were built in the 1930s–1940s when air travel become popular. They are often in the art deco style architecture of the time. One such example from 1940 is the Houston Municipal Airport Terminal. Early airport terminals opened directly onto the tarmac: passengers would walk or take a bus to their aircraft. This design is still common among smaller airports. Many larger airports have "bus gates" to access aircraft which are parked beyond the main terminal. 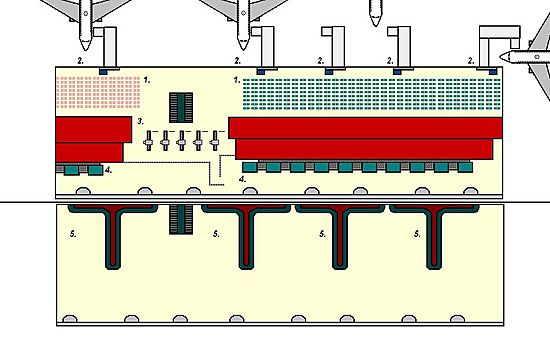 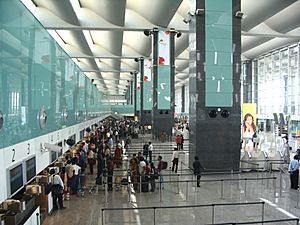 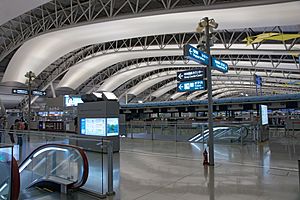 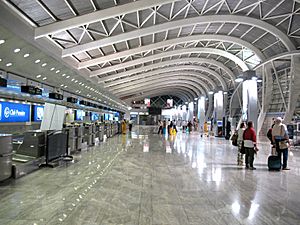 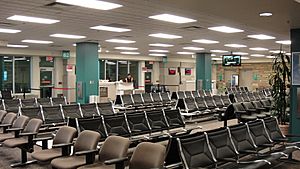 A satellite terminal is a building that is not joined to other airport buildings. The aircraft can park around the entire building. The first airport to use a satellite terminal was London Gatwick Airport. Passengers use an underground tunnel to walk to the satellite from the main terminal. This was also the first setup at Los Angeles International Airport, but it has since been changed to a pier layout. The first airport to use an automatic people mover to join the main terminal with a satellite was Tampa International Airport. Other examples include the following:

Dubai International Airport, Dubai, United Arab Emirates, Terminal 3, is the largest single Terminal building in the world. It had an area of over (1,500,000 m²) when it opened on October 14, 2008. It can handle an excess of 43 million passengers.

Many small and mid-size airports have a single two or three-lane one-way loop road which is used by local private vehicles and buses to drop off and pick-up passengers.

An international airport may have two one-way loop roads, one for departures and one for arrivals. It may have a direct rail connection by regional rail, light rail, or subway to the downtown or central business district of the closest major city. The largest airports may have direct connections to the closest freeway. There will be car rental agencies and taxi companies at the terminals. The Hong Kong International Airport has ferry piers on the airside to connect with ferry piers across the border.

All content from Kiddle encyclopedia articles (including the article images and facts) can be freely used under Attribution-ShareAlike license, unless stated otherwise. Cite this article:
Airport terminal Facts for Kids. Kiddle Encyclopedia.