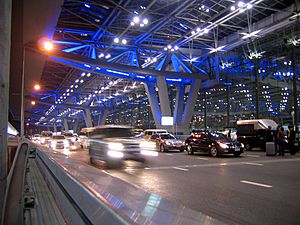 Suvarnabhumi Airport is the main international airport of Bangkok, Thailand. It is in Bangchoung, Rachatawa, Noungprue and Bangphli district Samutprakarn province. The area of the airport is about 32 square kilometres (12 sq mi). It is six times bigger than Donmueang Airport.

The Thai government gave a budget of about 150,000 million baht (US$4.9 billion or 3.7 billion euro) to build this international airport. This included investment of Government service and State Enterprises of 137,000 million baht ($4.46 billion), and private company about 13,000 million baht ($423 million). The airport could support the passengers more than 45 million people.

International airlines included of 102 airways and 142 cities. There are:

All content from Kiddle encyclopedia articles (including the article images and facts) can be freely used under Attribution-ShareAlike license, unless stated otherwise. Cite this article:
Suvarnabhumi Airport Facts for Kids. Kiddle Encyclopedia.