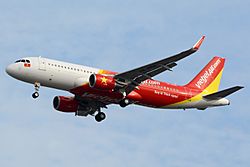 VietJet Air is a Vietnamese budget airline. The headquarters are in Hanoi. The center of activity is from Tan Son Nhat International Airport in Ho Chi Minh City. The company was founded in 2007. VietJet Air began operation in 2011. It has flights to most of airports in Vietnam and some international airports. From its first flight to 31 December 2014, the airline has served 10 million passenger. In February 2014, it signed a purchase order with Airbus to buy 63 aircraft. It has plans to purchase 30 more and to lease seven more.

All content from Kiddle encyclopedia articles (including the article images and facts) can be freely used under Attribution-ShareAlike license, unless stated otherwise. Cite this article:
VietJet Air Facts for Kids. Kiddle Encyclopedia.