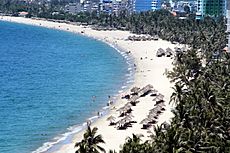 Nha Trang; is a coastal city and capital of Khánh Hòa Province, on the South Central Coast of Vietnam. It is bounded on the north by Ninh Hoà district, on the south by Cam Ranh town and on the west by Diên Khánh District. The city has about 392,000 inhabitants, a number that is projected to increase to 560,000 by 2015 and 630,000 inhabitants by 2025. An area of 12.87 square kilometres (4.97 sq mi) of the western communes of Diên An and Diên Toàn is planned to be merged into Nha Trang which will make its new area 265.47 square kilometres (102.50 sq mi) based on the approval of the Prime Minister of Vietnam in September 2012.

Nha Trang is well known for its beaches and scuba diving and has developed into a popular destination for international tourists, attracting large numbers of backpackers, as well as more affluent travelers on the south-east Asia circuit; it is already very popular with Vietnamese tourists, with Nha Trang Bay widely considered as among the world's most beautiful bays. Tourists are welcomed to participate in the Sea Festival, held biennially. Nha Trang was the site of the Miss Universe 2008 Pageant on July 14, 2008 and Miss Earth 2010 was held on December 4, 2010. It was also the site for the April 14, 2015 season 8 finale of Face Off. Nha Trang was approved to host the 2016 Asian Beach Games.

Nha Trang's economy relies largely on tourism. In the suburban areas around the city, the shipbuilding industry has developed and contributed significantly to the local economy. Fishery and services are also important to the city. Khánh Hòa Province in general and Nha Trang is particular are among the largest contributors to Vietnam's annual budget revenues. Lobster farming on the sea is an important industry for the people living in suburb areas.

To the south of the city, by Cam Ranh Bay, several industrial parks are under construction and have been partly available for investors. Once the construction of the deep-water port on Vân Phong Bay has been completed, this area will become the third important economic zone in the province (besides Nha Trang and Cam Ranh). 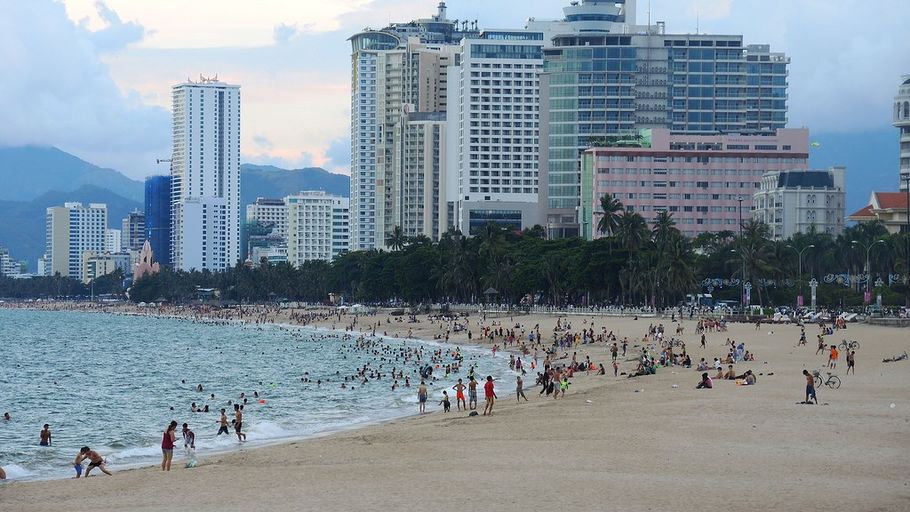 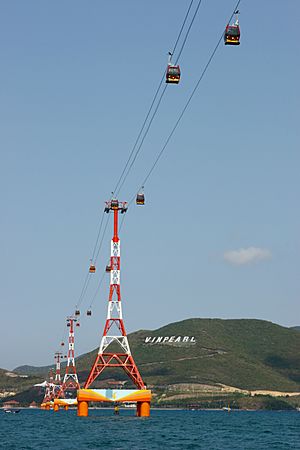 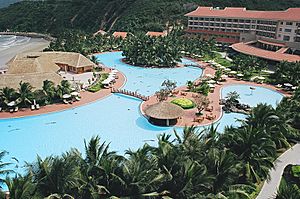 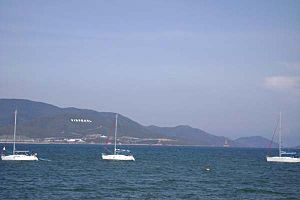 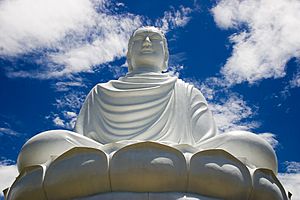 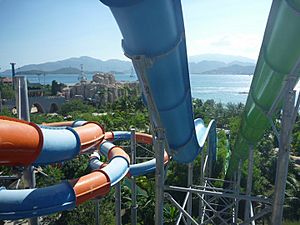 Nha Trang is one of the most important tourist hubs of Vietnam, thanks to its beaches with fine and clean sand and the clear ocean water with mild temperatures all year round. There are several resorts — such as Vinpearl, Diamond Bay and Ana Mandara — and amusement and water parks, in the city and on islands off the coast. The possibly most beautiful street of Nha Trang is Tran Phu Street along the seaside, sometimes referred to as the Pacific Coast Highway of Vietnam.

Lying off Nha Trang is the Hon Tre Island (Bamboo Island), with a major resort operated by the Vinpearl Group. The Vinpearl Cable Car, a gondola lift system, links the mainland to the five-star resort and theme park on Hon Tre Island.

Nha Trang is a stopover for annual yacht races starting in Hong Kong. In recent years, the city has welcomed many five-star sea cruises. In addition to sailboat racing, Nha Trang provides a rich variety of tourist activities for visitors. Island hopping, scuba diving, water sports and other sporting activities can be enjoyed. The Nha Trang Tourist Information Center (a non-governmental organisation), located near the Cho Dam Market has been set up to provide information for visitors.

The local cuisine is most famous for fresh seafood and barbecued pork rolled in rice paper. The area's bird's nest soup is deemed one of the best in Vietnam. Bird's nests are collected in the wild, on bird farms on the islands off the coast and even in some houses in the inner city. The farmed bird in question belongs to the swiftlet group, popularly referred to as yến hàng (Aerodramus fuciphagus and A. germani).

Scuba diving and kite boarding are available, as are catamaran sailboats. Winds are steady. 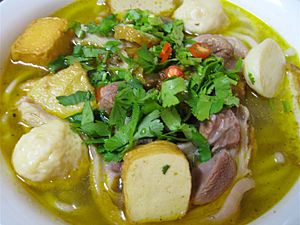 All content from Kiddle encyclopedia articles (including the article images and facts) can be freely used under Attribution-ShareAlike license, unless stated otherwise. Cite this article:
Nha Trang Facts for Kids. Kiddle Encyclopedia.