In the 15th century, the area of Kota Kinabalu was under the influence of Bruneian Empire. In the 19th century, the British North Borneo Company (BNBC) first set up a settlement near the Gaya Island, however it was destroyed by fire in 1897. In July 1899, the place located opposite to the Gaya Island was identified as a suitable place for settlements, development in the area was started soon after that. Jesselton became a major trading port in the area, and was connected to the North Borneo Railway.

Jesselton was largely destroyed during World War II. The Japanese occupation of Jesselton provoked several local uprisings notably the Jesselton Revolt but they were eventually defeated by the Japanese. After the war the place was handed to the British Crown Colony. 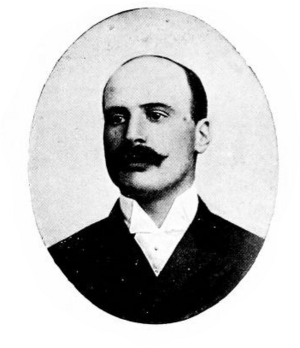 The British Crown declared Jesselton as the new capital of North Borneo in 1946 and started to rebuild the town. In 1967, Jesselton was renamed as Kota Kinabalu, Kota being the Malay word for Fort and Kinabalu after the nearby Mount Kinabalu. Kota Kinabalu was granted city status in 2000.

Kota Kinabalu is often known as KK both in Malaysia and internationally. It is a major tourist destination and a gateway for travellers visiting Sabah and Borneo. Kinabalu Park is located about 90 kilometres from the city and there are many other tourist attractions in and around the city. 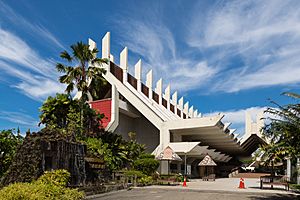 There are a number of cultural venues in Kota Kinabalu. The Sabah State Museum is the main museum of Sabah. Near the museum are the Science and Technology Centre, Sabah Art Gallery, and the Ethno Botanic Gardens. Wisma Budaya Art Gallery in the city centre hosts some national as well as regional art exhibitions. 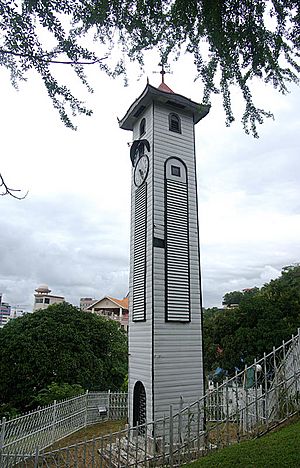 Atkinson Clock Tower, one of the historical landmarks in the city

The Atkinson Clock Tower was built in 1905. It was formerly used as a navigation aid for ships. It is only one of three pre-World War II buildings to survive the war. The Petagas War Memorial is a reminder of those who died when they went against the Japanese forces during World War II.

There are many leisure spots and conserved areas in and around Kota Kinabalu. Anjung Samudra (KK Waterfront) is a waterfront entertainment spot in the city centre which features restaurants, cafes, pubs, and a nightclub. The North Borneo Railway, which begins its journey from Tanjung Aru station, offers a scenic tour of the countryside in the West Coast Division and the Interior Division. 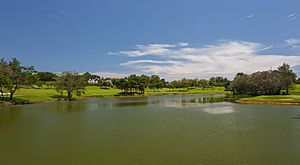 Sutera Harbour Golf & Country Club near the city centre was built on reclaimed land. It features a golf and country club, a marina, and two hotels.

Tanjung Aru, located about 10 kilometres, 6 miles, from the city centre, is one of the beaches along the West Coast. Its name came from the casuarina trees (locally called Aru trees) that grow on the shoreline. The beach is 3 kilometres in length. In the vicinity of Tanjung Aru lies the Kinabalu Golf Club, Prince Philip Botanical Park, KK Yacht Club, and Shangri-La's Tanjung Aru Beach Resort. Prince Phillip Park is freely accessible to the public, while the others need permission. This beach is known for its sunset views. 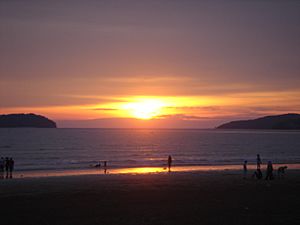 Located within the Likas Bay area is the Kota Kinabalu City Bird Sanctuary. With an area of 24 acres (9.7 ha), it is one of the few remaining patches of mangrove forest that once existed extensively along the coastal region of Kota Kinabalu. The Sabah Zoological and Botanical Park (Lok Kawi Wildlife Park) in Lok Kawi is the first zoo in Sabah. Set on a 280-acre (1.1 km2) piece of land, it is the largest zoo in Malaysia. 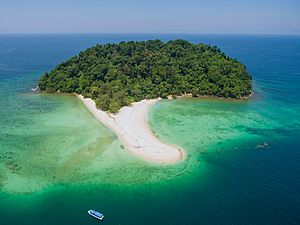 Tun Fuad Stephens Park, located in Bukit Padang, is used for jogging and hiking by locals. It is surrounded by forests and also features a man-made lake. It has food stalls and restaurants. Tunku Abdul Rahman Park is a State Park consisting of the islands of Sapi, Mamutik, Manukan, Sulug and Gaya. It is used for snorkelling. Babagon River in Penampang and Kiansom Falls near Inanam are also places visited for picnics and leisure bathing. 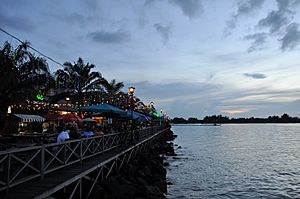 The boardwalk in Kota Kinabalu at dusk

Outside the city, Crocker Range Park is a common spot for jungle trekking and camping. Kota Kinabalu is also the gateway to one of the most popular conservation areas in Malaysia, Kinabalu Park. The park is a two-hour drive away from the city and Mount Kinabalu, which is the 10th highest peak in South-East Asia and the highest in Malaysia, is located there. The Rafflesia Forest Reserve near Tambunan is also within the Crocker Range National Park boundary. The Tuaran Crocodile Farm has around 1400 crocodiles in its enclosure, making it the largest of its kind in Sabah. 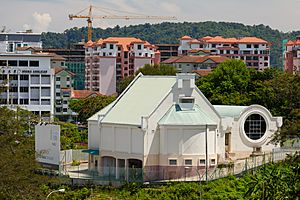 The Tun Mustapha Tower (formerly Sabah Foundation Building) is a 30-storey glass building and is supported by high-tensile steel rods, one of only three buildings in the world that is built using this method. Other buildings and sites in the city are the stilt villages, these houses are built on shallow coastal waters and are homes for the Bajau and Suluk inhabitants.

The Sabah State Mosque in Sembulan is the main mosque in the city. The City Mosque on Likas Bay is another significant landmark in the city. On top of an hill in the city, there is also a freemason hall. The Signal Hill Observatory near the CBD offers a scenic view of the city centre, the islands, and the sea.

All content from Kiddle encyclopedia articles (including the article images and facts) can be freely used under Attribution-ShareAlike license, unless stated otherwise. Cite this article:
Kota Kinabalu Facts for Kids. Kiddle Encyclopedia.