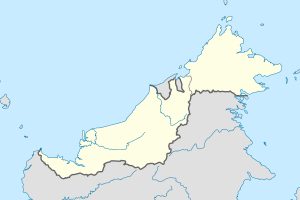 East Malaysia or Malaysian Borneo, is a term used to refer to the Malaysian section of Borneo. One of Southeast Asia's major islands. Major provinces in the region are the Malaysian provinces of Sabah and Sarawak. It is located north of Indonesian Borneo or "Kalimantan", and southwest of the Philippines. Also, the tiny country of Brunei is nearly landlocked by Malaysia.

All content from Kiddle encyclopedia articles (including the article images and facts) can be freely used under Attribution-ShareAlike license, unless stated otherwise. Cite this article:
East Malaysia Facts for Kids. Kiddle Encyclopedia.