The South China Sea is an ocean region in the south of China. It is a part of the Pacific Ocean.

The sea and its islands and reefs are claimed by many nations, including China, Vietnam, the Philippines, Malaysia and Brunei. These claims are mirrored in the many names used for the islands and the sea.

The name of the sea as used internationally is "South China Sea." In Vietnam the sea is called "Biển Đông" (which exactly means "East Sea").

In the Philippines the eastern part of the sea, right to the west of Luzon island, was commonly called "Luzon Sea," with the remaining sea still called "South China Sea." To support its claims on the Spratly Islands and the Scarborough Shoal, the Philippines has named the eastern part of the sea the "West Philippine Sea" in 2012. Sometimes, this name is extended as the name of the entire sea itself in the country. 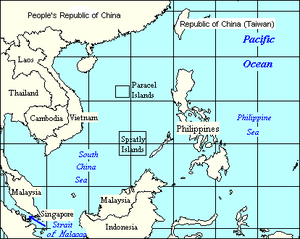 Map of the South China Sea

The South China Sea runs from Singapore to the Taiwan Strait The sea has an area of around 3,500,000 km². It is located in the western arm of the Pacific Ocean

It is one of the largest seas after the five oceans. There are hundreds of small South China Sea Islands. As a group, these islands are called an archipelago.

Some of the bigger islands have people living on them. They are inhabited. Most of the islands are small and uninhabited.

All content from Kiddle encyclopedia articles (including the article images and facts) can be freely used under Attribution-ShareAlike license, unless stated otherwise. Cite this article:
South China Sea Facts for Kids. Kiddle Encyclopedia.