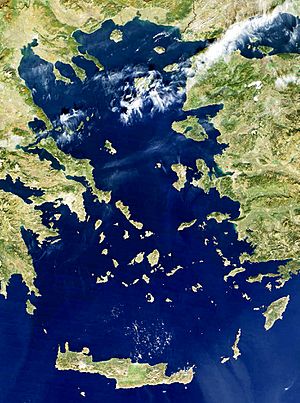 The Aegean Sea with its large number of islands

An archipelago (pronounced /ɑrkəˈpɛləgoʊ/) is a chain or group of islands. The word archipelago means "chief sea", from Greek arkhon (arkhi-) ("leader") and pelagos ("sea").

Archipelagos are usually found in the open sea; less commonly, a big landmass may neighbor them, an example being Scotland which has more than 700 islands surrounding the mainland. Many archipelagos are volcanic, forming along mid-ocean ridges or hotspots. Others are island arcs neighboring an oceanic trench. Many other processes create archipelagos, including erosion, deposition, and land elevation.

The four biggest countries that are mainly archipelagos are Japan, the Philippines, the United Kingdom and Indonesia (the world's biggest archipelagic country according to the CIA World Factbook). The biggest archipelago in the world by size is in Northern Canada, the Canadian Arctic Archipelago, which is in the Arctic Ocean.

All content from Kiddle encyclopedia articles (including the article images and facts) can be freely used under Attribution-ShareAlike license, unless stated otherwise. Cite this article:
Archipelago Facts for Kids. Kiddle Encyclopedia.