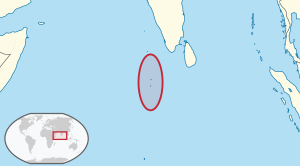 The Maldives are a group of islands in the Indian Ocean. They are southwest of India. They are made up of the Maldive and Suadive archipelagos, with over 1,200 islands. These islands are a part of 26 atolls. People live on about 200 of the islands. It has more than 1126 coral reefs. It is the flattest country in the world. The highest point in the Maldives is only 2 m (7 ft) high above the level of the sea.

The current president of the Madives is Ibrahim Mohamed Solih.

All content from Kiddle encyclopedia articles (including the article images and facts) can be freely used under Attribution-ShareAlike license, unless stated otherwise. Cite this article:
Maldives Facts for Kids. Kiddle Encyclopedia.