The pufferfish is a family of fish, with about 100 species. They are also known as the blowfish, fugu, swellfish, and globefish. They are called the pufferfish because when they are threatened, they puffs up to about twice their normal size by gulping water. In this enlarged state, the pufferfish can swim at only about half their normal speed. Pufferfish are generally believed to be the second-most poisonous vertebrates in the world, after the golden poison frog. They use tetrodotoxin, a powerful neurotoxin.

Most pufferfish are found in sub-tropical and tropical marine waters (including coral reefs) in the Atlantic, Pacific, and Indian Oceans. Some puffers live in brackish and fresh water. The scientific name refers to the four large teeth, fused into an upper and lower plate, which are used for crushing the shells of crustaceans and mollusks, their natural prey.

Despite their poison, the meat of some species is eaten in Japan (as 河豚, pronounced 'fugu'), Korea (as 복 bok or 복어 bogeo ), and China (as 河豚 hétún). It is prepared by specially trained chefs who know which part is safe to eat and in what quantity.

The Tetraodontidae contain at least 200 species of puffers in 29 genera:

They are typically small to medium in size, although a few species can reach lengths greater than 100 cm (39 in).

They are most diverse in the tropics, relatively uncommon in the temperate zone, and completely absent from cold waters.

The pufferfish's secondary defense mechanism, used if successfully pursued, is to fill its extremely elastic stomach with water (or air when outside the water) until it is much larger and almost spherical in shape. Even if they are not visible when the puffer is not inflated, all puffers have pointed spines, so a hungry predator may suddenly find itself facing an unpalatable, pointy ball rather than a slow, tasty fish. Predators that do not heed this warning (or are "lucky" enough to catch the puffer suddenly, before or during inflation) may die from choking, and predators that do manage to swallow the puffer may find their stomachs full of tetrodotoxin (TTX), making puffers an unpleasant, possibly lethal, choice of prey. This neurotoxin is found primarily in the ovaries and liver, although smaller amounts exist in the intestines and skin, as well as trace amounts in muscle. It does not always have a lethal effect on large predators, such as sharks, but it can kill humans.

Larval pufferfish are chemically defended by the presence of TTX on the surface of skin, which causes predators to spit them out.

Not all puffers are necessarily poisonous; the flesh of the northern puffer is not toxic (a level of poison can be found in its viscera) and it is considered a delicacy in North America. Takifugu oblongus, for example, is a fugu puffer that is not poisonous, and toxin level varies widely even in fish that are. A puffer's neurotoxin is not necessarily as toxic to other animals as it is to humans, and puffers are eaten routinely by some species of fish, such as lizardfish and sharks.

Puffers are able to move their eyes independently, and many species can change the color or intensity of their patterns in response to environmental changes. In these respects, they are somewhat similar to the terrestrial chameleon. Although most puffers are drab, many have bright colors and distinctive markings, and make no attempt to hide from predators. This is likely an example of honestly signaled aposematism.

Dolphins have been filmed expertly handling pufferfish amongst themselves in an apparent attempt to get high or enter a trance-like state.

Many marine puffers have a pelagic, or open-ocean, life stage. Spawning occurs after males slowly push females to the water surface or join females already present. The eggs are spherical and buoyant. Hatching occurs after roughly four days. The fry are tiny, but under magnification have a shape usually reminiscent of a pufferfish. They have a functional mouth and eyes, and must eat within a few days. Brackish-water puffers may breed in bays in a similar manner to marine species, or may breed more similarly to the freshwater species, in cases where they have moved far enough upriver.

Reproduction in freshwater species varies quite a bit. The dwarf puffers court with males following females, possibly displaying the crests and keels unique to this subgroup of species. After the female accepts his advances, she will lead the male into plants or another form of cover, where she can release eggs for fertilization. The male may help her by rubbing against her side. This has been observed in captivity, and they are the only commonly captive-spawned puffer species.

Target-group puffers have also been spawned in aquariums, and follow a similar courting behavior, minus the crest/keel display. However, eggs are laid on a flat piece of slate or other smooth, hard material, to which they adhere. The male will guard them until they hatch, carefully blowing water over them regularly to keep the eggs healthy. His parenting is finished when the young hatch, and the fry are on their own.

Information on breeding of specific species is very limited. T. nigroviridis, the green-spotted puffer, has recently been artificially spawned under captive conditions. It is believed to spawn in bays in a similar manner to saltwater species, as their sperm was found to be motile only at full marine salinities, but actual wild breeding has never been observed. Xenopterus naritus has been reported to be first breed artificially in Sarawak, Northwestern Borneo in June 2016, which the main purpose is for development in aquaculture of the species.

In 2012, males of the species Torquigener albomaculosus were documented carving large geometric, circular structures in the seabed sand in Amami Ōshima, Japan. The structures serve to attract females and provide a safe place for them to lay their eggs.

A pufferfish's diet can vary depending on its environment. Traditionally, their diet consists mostly of algae and small invertebrates. They can survive on a completely vegetarian diet if their environment is lacking resources, but prefer an omnivorous food selection. Larger species of pufferfish are able to use their beak-like front teeth to break open clams, mussels, as well as other shellfish. Some species of pufferfish have also been known to enact various hunting techniques ranging from ambush to open water hunting.

The tetraodontids have been estimated to diverge from diodontids between 89 and 138 million years ago. The four major clades diverged during the Cretaceous between 80 and 101 million years ago. The oldest known pufferfish genus is Eotetraodon, from the Lutetian epoch of Middle Eocene Europe, with fossils found in Monte Bolca and the Caucasus Mountains. The Monte Bolca species, E. pygmaeus, coexisted with several other tetraodontiforms, including an extinct species of diodontid, primitive boxfish (Proaracana and Eolactoria), and other, totally extinct forms, such as Zignoichthys and the spinacanthids. The extinct genus, Archaeotetraodon is known from Miocene-aged fossils from Europe. 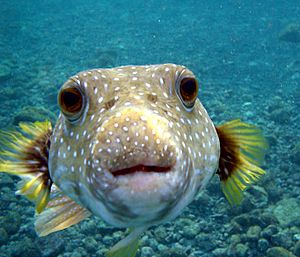 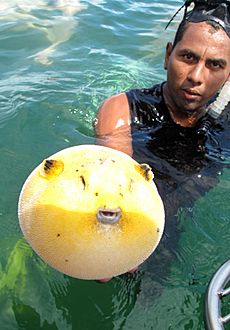 Man with a guineafowl puffer in Costa Rica

Pufferfish can be lethal if not served properly. Puffer poisoning usually results from consumption of incorrectly prepared puffer soup, fugu chiri, or occasionally from raw puffer meat, sashimi fugu. While chiri is much more likely to cause death, sashimi fugu often causes intoxication, light-headedness, and numbness of the lips. Pufferfish tetrodotoxin deadens the tongue and lips, and induces dizziness and vomiting, followed by numbness and prickling over the body, rapid heart rate, decreased blood pressure, and muscle paralysis. The toxin paralyzes the diaphragm muscle and stops the person who has ingested it from breathing. People who live longer than 24 hours typically survive, although possibly after a coma lasting several days.

The source of tetrodotoxin in puffers has been a matter of debate, but it is increasingly accepted that bacteria in the fish's intestinal tract are the source.

Saxitoxin, the cause of paralytic shellfish poisoning and red tide, can also be found in certain puffers.

In September 2012, the Bureau of Fisheries and Aquatic Resources in the Philippines issued a warning not to eat puffer fish, after local fishermen died upon consuming puffer fish for dinner. The warning indicated that puffer fish toxin is 100 times more potent than cyanide.

Pufferfish, called pakpao in Thailand, are usually consumed by mistake. They are often cheaper than other fish, and because they contain inconsistent levels of toxins between fish and season, there is little awareness or monitoring of the danger. Consumers are regularly hospitalized and some even die from the poisoning.

Cases of neurological symptoms, including numbness and tingling of the lips and mouth, have been reported to rise after the consumption of puffers caught in the area of Titusville, Florida, U.S. The symptoms generally resolve within hours to days, although one affected individual required intubation for 72 hours. As a result, Florida banned the harvesting of puffers from certain bodies of water.

Treatment is mainly supportive and consists of intestinal decontamination with gastric lavage and activated charcoal, and life-support until the toxin is metabolized. Case reports suggest anticholinesterases such as edrophonium may be effective.

All content from Kiddle encyclopedia articles (including the article images and facts) can be freely used under Attribution-ShareAlike license, unless stated otherwise. Cite this article:
Pufferfish Facts for Kids. Kiddle Encyclopedia.