Lagos is the second largest city in Nigeria and the most populous city in Nigeria and in West Africa, with more than 10 million inhabitants. There are about 12.5 million to 18 million people living in Lagos which makes it one of the biggest cities in Africa. Lagos is surrounded by the Atlantic Ocean. The city is made of several local local government areas. Some of these include Somolu Koshofe, Ifelodun, Surulere, Agege, Ikeja, Ikorodu, Ajegunle, Oshodi, and Maryland.

Each Local government area has a presence of the central government with the establishment of general hospital, judiciary and police stations to help in protecting life and properties. 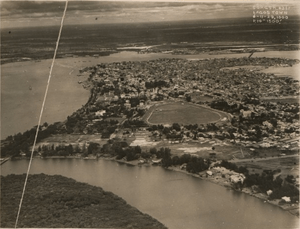 Lagos was originally inhabited by the Awori subgroup of the Yoruba people in the 15th century. Under the leadership of the Oloye Olofin, the Awori moved to an island now called Iddo and then to the larger Lagos Island. In the 16th century, the Awori settlement was conquered by the Benin Empire and the island became a Benin war-camp called "Eko" under Oba Orhogbua, the Oba of Benin at the time. Eko is still the native name for Lagos.

Lagos, which means "lakes", was a name given to the settlement by the Portuguese. Throughout history, it was home to a number of warring ethnic groups who had settled in the area. Following its early settlement by the Awori nobility, and its conquest by the Bini warlords of Benin, the state first came to the attention of the Portuguese in the 15th century.

Portuguese explorer Rui de Sequeira visited the area in 1472, naming the area around the city Lago de Curamo. Another explanation is that Lagos is named after a major port in Portugal—a maritime town that, at the time, was the main centre of Portuguese expeditions down the African coast.

In Britain's early 19th century fight against the transatlantic slave trade, its West Africa Squadron or Preventative Squadron as it was also known, continued to pursue Portuguese, American, French and Cuban slave ships and to impose anti-slavery treaties with West African coastal chiefs with so much doggedness that they created a strong presence along the West African coast from Sierra Leone all the way to the Niger Delta (today's Nigeria) and as far south as Congo. In 1849, Britain appointed John Beecroft Consul of the Bights of Benin and Biafra, a position he held (along with his governorship of Fernando Po) until his death in 1854. John Duncan was appointed Vice Consul and was located at Wydah. At the time of Beecroft's appointment, the Kingdom of Lagos (under Oba Kosoko) was in the western part of the Consulate of the Bights of Benin and Biafra and was a key slave trading port. In 1851 and with pressure from liberated slaves who now wielded political and business influence, Britain intervened in Lagos in what is now known as the Bombardment of Lagos or Capture of Lagos resulting in the installation of Oba Akitoye and the ouster of Oba Kosoko. Oba Akitoye then signed the Treaty between Great Britain and Lagos abolishing slavery. The signing of the 1852 treaty ushered in the Consular Period in Lagos' history wherein Britain provided military protection for Lagos.

Following threats from Kosoko and the French who were positioned at Wydah, a decision was made by Lord Palmerston (British Prime Minister) who noted in 1861, "the expediency of losing no time in assuming the formal Protectorate of Lagos". William McCoskry, the Acting Consul in Lagos with Commander Bedingfield convened a meeting with Oba Dosunmu on 30 July 1861 aboard HMS Prometheus where Britain's intent was explained and a response to the terms were required by August 1861. Dosunmu resisted the terms of the treaty but under the threat to unleash violence on Lagos by Commander Bedingfield, Dosunmu relented and signed the Lagos Treaty of Cession on 6 August 1861. 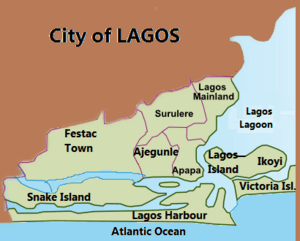 Map of Lagos' initial city boundaries, showing its contemporary districts. This definition is rarely used in the present day; the expanded metropolitan area is now a more accepted definition of Lagos.

Lagos was declared a colony on 5 March 1862. The remainder of modern-day Nigeria was seized in 1887, and when the Colony and Protectorate of Nigeria was established in 1914, Lagos became its capital, continuing as such after the country's independence from Britain in 1960. Along with migrants from all over Nigeria and other West African nations were the returnee ex-slaves known as Creoles, who came from Freetown, Sierra Leone, Brazil and the West Indies to Lagos. The Creoles contributed to Lagos' modernisation and their knowledge of Portuguese architecture can still be seen from the architecture on Lagos Island. Since the 19th century, Lagos gradually transformed to a melting pot of Africans and Europeans. Railway links and telephone cables connecting Lagos to London had been established by 1886. Electric street lighting was introduced in the city in 1898. Lagos experienced rapid growth throughout the 1960s and 1970s as a result of Nigeria's economic boom.

Before the creation of Lagos State on 27 May 1967, Lagos, which was the country's capital had been administered directly by the Federal Government as a Federal Territory through the Federal Ministry of Lagos Affairs, while the Lagos City Council (LCC) governed the city. Lagos, along with the towns from the then Western region (Ikeja, Agege, Mushin, Ikorodu, Epe and Badagry), were eventually captured to create Lagos State. Lagos city was split into the present day seven Local Government Areas (LGAs), while the other towns now make up 13 LGAs in the state. Lagos played the dual role of being the State and Federal Capital until 1976 when the state capital was moved to Ikeja. Lagos was adversely affected during Nigeria's military rule. Also, on 12 December 1991, the seat of the Federal Government was also formally relocated to Abuja. However, Lagos remains the financial centre of the country, and also grew to become the most populous conurbation in the country.

Lagos is loosely classified into two main geographical areas—the "Island" and the "Mainland". 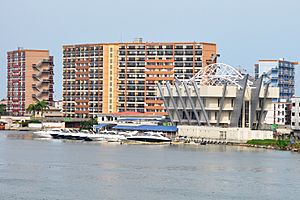 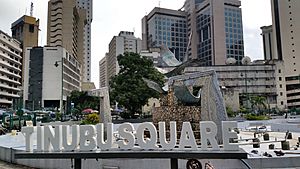 The Island is a loose geographical term that is used to define the area of Lagos that is separated from the "mainland" by the main channel draining the lagoon into the Atlantic Ocean, which forms Lagos Harbour. The Island is mainly a collection of islands that are separated from each other by creeks of varying sizes and are connected together by bridges. The smaller sections of some creeks have been dredged and built over. This part of Lagos is the area where most business activities and entertainment events in Lagos takes place. It also houses most of the upscale residential areas in Lagos. The Local Government Areas (LGAs) that are considered to be in the Island include Lagos Island, Eti-Osa. The major upscale island neighbourhoods within these LGAs include Ikoyi and Victoria Island. Three major bridges join the island to the mainland. They are the Carter Bridge, which starts from Iddo; the Eko Bridge (formerly called the Second Mainland Bridge); and the Third Mainland Bridge, which passes through densely populated mainland suburbs to the Lagos Lagoon. 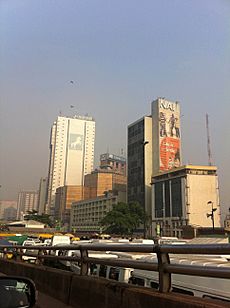 Lagos Island contains a central business district. This district is characterized by high-rise buildings. The island also contains many of the city's largest wholesale marketplaces (such as the popular Idumota and Balogun Markets). It also has the National Museum of Nigeria, the Central Mosque, the Glover Memorial Hall, Christ's Church Cathedral (CMS) and the Oba's Palace (Iga Idunganran). Another major part of Lagos Island is Marina. It borders around the idumota and Balogun markets and houses major Banking institutions. Though formerly in a derelict condition, Lagos Island's Tinubu Square is a site of historical importance; it was here that the Amalgamation Ceremony that unified the North and South protectorate to form Nigeria took place in 1914.

Ikoyi is situated on the eastern half of Lagos Island and joined to it by a land fill. Ikoyi is also connected to Victoria Island by Falomo bridge, which carries the main road over Five Cowrie creek. Ikoyi housed the headquarters of the federal government of Nigeria and other buildings owned by the government, including the old federal secretariat complex. The complex today is on reestablishment.

In Ikoyi there are military and police barracks, a top-security prison and a federal high court of Nigeria. Ikoyi also has a number of hotels, night clubs, a recreational park and one of Africa's largest golf courses. Originally a middle class neighbourhood, in recent years, it has become a fashionable residential enclave for the upper middle class to the upper class. There are also commercial activities in Ikoyi, which is spotted in an increasing number of offices, banks, and shopping complexes. The commercial section is concentrated in the South-West. 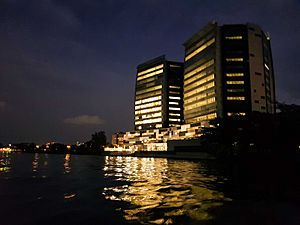 Victoria Island with its annexe is situated to the south of Lagos Island. It has expensive real estate properties such as The Oceanna. a development by Grenadines Homes. Because of Lagos' expensive real estate properties, many new luxury condos and apartments are blooming up everywhere. Along with Ikoyi, Victoria Island occupies a major area in Lagos that boasts of several sizeable shopping districts. On its sea shore along the Atlantic front, there is environmentally reconstructed Bar Beach.

Across the main channel of the lagoon from Lagos Island, there is a smaller settlement called Iddo. Iddo is also a railroad terminus and it is now situated in the Lagos Mainland local government area after it was connected to the mainland like a peninsula.

A huge population of Lagosians also live on the Lagos mainland, and most industries are located there. The mainland is known for its music and nightlife, which used to be located in areas around Yaba and Surulere. However, in recent years more night clubs have sprung up on the Island, making the Island (particularly Victoria Island, Ikate and Lekki Phase 1) the main nightlife attractions. Mainland LGAs include Surulere, Apapa, and Lagos Mainland. Metropolitan Lagos suburban LGAs include: Agege, Amuwo Odofin, Mushin, Oshodi-Isolo and Ikeja (site of Murtala Muhammed International Airport and the capital of Lagos State).

Major Areas on the mainland include Ebute Metta, Yaba and Ejigbo. Some rivers, like Badagry Creek, flow parallel to the coast for some distance before exiting through the sand bars to the sea.

Lagos experiences a tropical savanna climate (Aw) according to the Köppen climate classification, as there's a significant precipitation difference between the wet season and the dry season. The wet season starts in April and ends in October, while the dry season starts in November and ends in March. The wettest month is June with precipitation total 315.5 millimetres (12.42 in), while the driest month is January with precipitation total 13.2 millimetres (0.52 in). 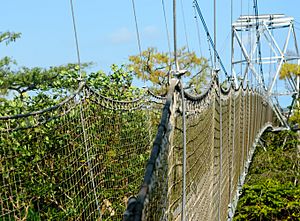 Lagos has the tallest skyline in Nigeria. The architectural styles in Lagos are diverse and range from tropical and vernacular to colonial European and ultramodern buildings or a mixture. Brazilian style architecture brought by the creoles is evident in buildings such as Water House and Shitta Bey Mosque. Skyscrapers and most high rise buildings are centered on the islands, while the mainland has some high rise buildings. In recent years, the Lagos State government has renovated existing parks and green areas, with a long-term goal of expansion. Many good quality buildings are interspersed across the city.

All content from Kiddle encyclopedia articles (including the article images and facts) can be freely used under Attribution-ShareAlike license, unless stated otherwise. Cite this article:
Lagos Facts for Kids. Kiddle Encyclopedia.