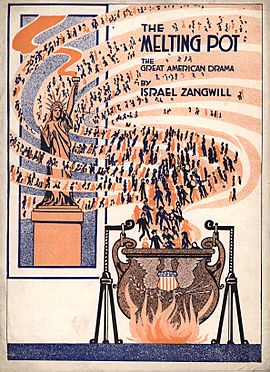 The image of the United States as a melting pot was popularized by the 1908 play The Melting Pot.

The melting pot is a way of describing a societies different elements "melting together" with a common culture. Historically, it is often used to describe the cultural integration of immigrants to the United States.

The exact term "melting pot" came into general usage in the United States after it was used to describe a fusion of nationalities, cultures and ethnicities in the 1908 play of the same name.

All content from Kiddle encyclopedia articles (including the article images and facts) can be freely used under Attribution-ShareAlike license, unless stated otherwise. Cite this article:
Melting pot Facts for Kids. Kiddle Encyclopedia.