Immigration to the United States facts for kids 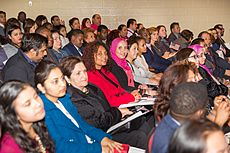 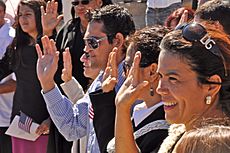 Immigrants to the United States take the Oath of Allegiance at a naturalization ceremony at the Grand Canyon National Park in Arizona, September 2010. 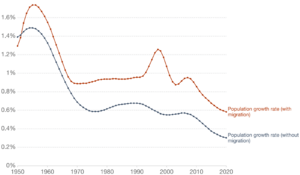 Population growth rate with and without migration in the U.S.

Immigration to the United States is the international movement of non-U.S. nationals in order to live permanently in the country.

Immigration has been a major source of population growth and cultural change throughout much of the U.S. history. Because the United States is a settler colonial society, all Americans, with the exception of the small percentage of Native Americans, can trace their ancestry to immigrants from other nations around the world.

In absolute numbers, the United States has a larger immigrant population than any other country, with 47 million immigrants as of 2015.

According to the 2016 Yearbook of Immigration Statistics, the United States admitted a total of 1.18 million legal immigrants (618k new arrivals, 565k status adjustments) in 2016. 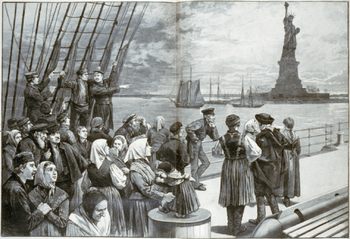 American immigration history can be viewed in four epochs: the colonial period, the mid-19th century, the start of the 20th century, and post-1965. Each period brought distinct national groups, races and ethnicities to the United States.

During the 17th century, approximately 400,000 English people migrated to Colonial America. However, only half stayed permanently.

Over half of all European immigrants to Colonial America during the 17th and 18th centuries arrived as indentured servants. They numbered 350,000.

On the eve of the War for Independence from 1770 to 1775, 7,000 English, 15,000 Scots, 13,200 Scots-Irish, 5,200 Germans, and 3,900 Irish Catholics arrived. Half the English immigrants were young single men, well-skilled, trained artisans like the Huguenots The European populations of the Middle Colonies of New York, New Jersey, Pennsylvania and Delaware were ethnically very mixed, the English constituting only 30% in Pennsylvania, 40-45% in New Jersey, to 18% in New York numbered 22,000.

Historians estimate that fewer than 1 million immigrants moved to the United States from Europe between 1600 and 1799. By comparison, in the first federal census, in 1790, the population of the United States was estimated to be 3,929,214.

The Naturalization Act of 1790 limited naturalization to "free white persons"; it was expanded to include blacks in the 1860s and Asians only in the 1950s. This made the United States an outlier, since laws that made racial distinctions were uncommon in the world in the 18th Century.

In the early years of the United States, immigration was fewer than 8,000 people a year, including French refugees from the slave revolt in Haiti. After 1820, immigration gradually increased.

From 1836 to 1914, over 30 million Europeans migrated to the United States. The death rate on these transatlantic voyages was high, during which one in seven travelers died. In 1875, the nation passed its first immigration law, the Page Act of 1875. 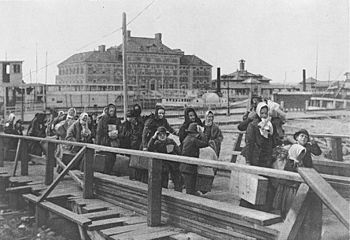 While the Chinese Exclusion Act of 1882 had already excluded immigrants from China, the immigration of people from Asian countries in addition to China was banned by the sweeping Immigration Act of 1917, also known as the Asiatic Barred Zone Act, which also banned homosexuals, people with intellectual disability, and people with an anarchist worldview.

The Emergency Quota Act was enacted in 1921, followed by the Immigration Act of 1924. The 1924 Act was aimed at further restricting immigrants from Southern and Eastern Europe, particularly Jews, Italians, and Slavs, who had begun to enter the country in large numbers beginning in the 1890s, and consolidated the prohibition of Asian immigration. 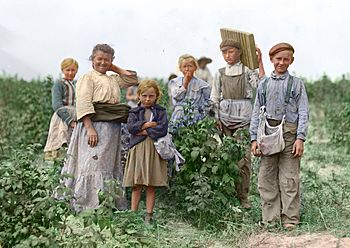 Polish immigrants working on the farm, 1909. The welfare system was practically non-existent before the 1930s and the economic pressures on the poor were giving rise to child labor.

The U.S. government sponsored a Mexican Repatriation program which was intended to encourage people to voluntarily move to Mexico, but thousands were deported against their will. Altogether, approximately 400,000 Mexicans were repatriated; half of them were US citizens.

Most of the Jewish refugees fleeing the Nazis and World War II were barred from coming to the United States. In the post-war era, the Justice Department launched Operation Wetback, under which 1,075,168 Mexicans were deported in 1954.

The Immigration and Nationality Act of 1965, also known as the Hart-Cellar Act, abolished the system of national-origin quotas. By equalizing immigration policies, the act resulted in new immigration from non-European nations, which changed the ethnic make-up of the United States.

In 1970, 60% of immigrants were from Europe; this decreased to 15% by 2000. In 1990, George H. W. Bush signed the Immigration Act of 1990, which increased legal immigration to the United States by 40%. In 1991, Bush signed the Armed Forces Immigration Adjustment Act 1991, allowing foreign service members who had served 12 or more years in the US Armed Forces to qualify for permanent residency and, in some cases, citizenship.

Appointed by Bill Clinton, the U.S. Commission on Immigration Reform recommended reducing legal immigration from about 800,000 people per year to approximately 550,000. While an influx of new residents from different cultures presents some challenges, "the United States has always been energized by its immigrant populations," said President Bill Clinton in 1998. "America has constantly drawn strength and spirit from wave after wave of immigrants ... They have proved to be the most restless, the most adventurous, the most innovative, the most industrious of people." 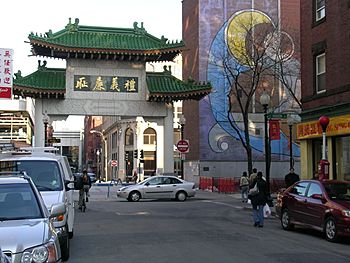 In 2001, President George W. Bush discussed an accord with Mexican President Vincente Fox. This possible accord was derailed by the September 11 attacks. From 2005 to 2013, the US Congress discussed various ways of controlling immigration. The Senate and House were unable to reach an agreement.

Nearly 14 million immigrants entered the United States from 2000 to 2010, and over one million persons were naturalized as U.S. citizens in 2008.

Nearly 8 million people immigrated to the United States from 2000 to 2005; 3.7 million of them entered without papers. In 1986 president Ronald Reagan signed immigration reform that gave amnesty to 3 million undocumented immigrants in the country. Hispanic immigrants suffered job losses during the late-2000s recession, but since the recession's end in June 2009, immigrants posted a net gain of 656,000 jobs. Over 1 million immigrants were granted legal residence in 2011.

For those who enter the US illegally across the Mexico–United States border and elsewhere, migration is difficult, expensive and dangerous. Virtually all undocumented immigrants have no avenues for legal entry to the United States due to the restrictive legal limits on green cards, and lack of immigrant visas for low-skilled workers.

Participants in debates on immigration in the early twenty-first century called for increasing enforcement of existing laws governing illegal immigration to the United States, building a barrier along some or all of the 2,000-mile (3,200 km) Mexico-U.S. border, or creating a new guest worker program. 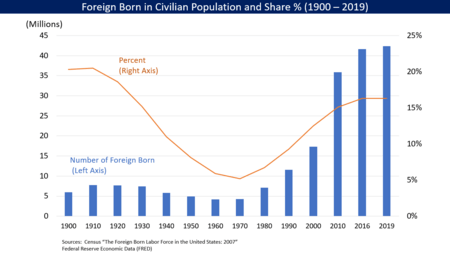 Number and share of foreign born residents in the U.S. civilian non-institutional population from 1900 to 2019

The Trump Administration has continued their promise of a heavy hand on immigration and is now making it harder for asylum seekers.

All content from Kiddle encyclopedia articles (including the article images and facts) can be freely used under Attribution-ShareAlike license, unless stated otherwise. Cite this article:
Immigration to the United States Facts for Kids. Kiddle Encyclopedia.