An indentured servant was a worker in a contract with an employer for a certain length of time. Usually a laborer or craftsman would have to work three to seven years in exchange for the cost of transportation across the ocean, food, clothing, land, a place to live and other things they needed to live or work during their contract. This kind of contract was called "indenture." Indentures were quite common in Colonial America in the 17th and 18th centuries. 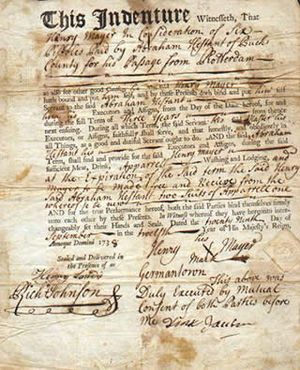 Indenture contract signed with an X by Henry Meyer in 1738

Many immigrants arrived in Colonial America as indentured servants. Their new master paid a ship's captain for the worker's trip across the Atlantic Ocean. Most were young men and women from England, Scotland and Germany under the age of 21. Their parents often made the arrangements. In the 17th and early 18th century, most people who came to America were indentured servants.

This type of contract has been common throughout world history in different forms. Usually the worker became an indentured servant by choice.

Some people claim that practices in the United Arab Emirates are examples of modern-day indentured servitude. Many workers from India and Pakistan must pay agents in their own countries for jobs in the Emirates. The recruiting agents take the workers passports after they enter the country. The workers do not know when they will get their passports back. The indentured servants get basic food and housing and transportation to the work place.

The United Nations passed the Universal Declaration of Human Rights 1948. Article 4 of the Declaration says that indenture, or servitude, is illegal. However, only laws in each country can stop it. In America, the Trafficking Victims Protection Act (TVPA) of 2000 expanded the definition of servitude.

All content from Kiddle encyclopedia articles (including the article images and facts) can be freely used under Attribution-ShareAlike license, unless stated otherwise. Cite this article:
Indentured servant Facts for Kids. Kiddle Encyclopedia.