The Philippine Independence Day Parade takes place annually in the United States along Madison Avenue in the Manhattan borough of New York City. The parade is held on the first Sunday in June. Its main purpose is to create awareness of Philippine culture and to raise funds for charity projects in the Philippines and the United States.

The 2021 Philippine Independence Day Parade in New York City will take place on 7 June 2021 at Madison Avenue, following the tradition of the celebration being on the first Sunday of June. There was no parade in 2020 as it went on hiatus. 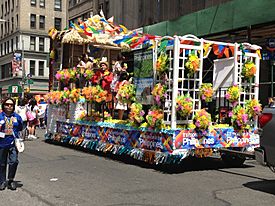 A scene at the Philippine Independence Day Parade 2013 in Midtown Manhattan. 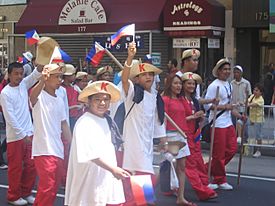 Established in 1990 during Consul General Hermenegildo Garcia's term, PIDC is an ad hoc committee with a life cycle of one year. All consuls general would later become the honorary overall chairperson for the corresponding year. The position of overall chairperson is elected every year. The winner in the election will then appoint the rest of her/his executive committee. 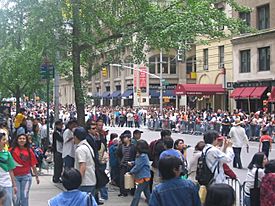 The Philippine Independence Day celebration in the northeastern United States includes not only New York but also the twelve states under the jurisdiction of the Philippine Consulate General in New York, namely, Connecticut, Delaware, Louisiana, Maine, Massachusetts, New Hampshire, New Jersey, Oklahoma, Pennsylvania, Rhode Island and Vermont. Depending on the theme each year, the overall chairperson may expand and invite other areas to participate in PIDC's many activities.

Traditionally held along Madison Avenue from 37th to 25th Streets in Manhattan, the climax of the preparation, the Philippine Independence Day Parade, Street Fair and Cultural Show, held on the first Sunday in June each year is the biggest celebration of Philippine Independence outside the Philippines. The Street Fair and Cultural Show take place on the east side of Madison Square Park. The festivities include a beauty, brains and talent contest that concludes in the Diwa ng Kalayaan (Spirit of Independence) Selection and Coronation Pageant and Gala, Philippine Independence Ball (the culminating festivity of the annual commemoration held on the Saturday after the first Sunday in June), An Evening with the Consul General, the Grand Marshal Gala, other fund raising activities, special cultural presentations and other events that may be initiated by the overall chairperson.

The Philippine Consulate extends its support and guidance to the PIDC from inception to culmination of the annual event. It begins with the sending of invitations to community leaders to a general meeting, election of overall chairperson, and in the planning and execution of activities up to Appreciation Night where the Consul General awards certificates of appreciation to PIDC officers and members.

Since 1993, there were calls for incorporation of PIDC. On September 8, 2001, with the election of the overall chairperson, the members of the Filipino American community were also given the chance to cast their vote on the incorporation of PIDC. Results showed that majority of Filipino Americans are in favor of incorporating PIDC. With paperwork and processing, an incorporated PIDC will take over the reins of the annual commemoration in 2003. Hence, 2002 was PIDC's last year under the auspices of the Consulate General of the Philippines, New York. 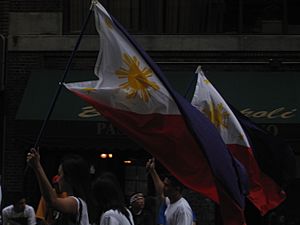 Philippine-flag carriers at the 2006 Philippine Independence Day Parade on Madison Avenue in Manhattan.

The Philippine Independence Day Parade, like any major New York City parades, has a set schedule for its annual celebration. Its usual slot is the first Sunday of June. Since its inception in 1990, the parade has steadily garnered attention not only from the Filipino American community, also from the general population of the New York metropolitan area.

Other Parts Of The World

British Columbia celebrates an annual Philippine Days Festival event at the Waterfront Park in North Vancouver. This 2-day festival, attended by some 25,000 Filipino Canadians and other cultural minorities, is usually held on the second weekend of June, and organized by the Metro Vancouver Philippine Arts and Culture Exposition Society (MVPACES). The highlight of the celebration happens on the second day where festivities begin with a flag raising ceremony at the City Hall of North Vancouver, then everyone proceeds to the Waterfront Park where a Park Parade starts the grand opening ceremony. The Royal Canadian Mounted Police (RCMP) escorts the Canadian Flag, while leading Filipino organizations take turn each year to bring in the Philippine flag for the mass singing of the two national anthems. All throughout the 2-day spectacle are stage presentations of traditional Philippine music and dance, a showcase of Filipino talents and entertainment, games, raffle prizes and kid's playland. Filipino cuisine and merchandise fill the park where Filipino Canadian families gather and celebrate. The City and District of North Vancouver play hosts to the event along with the Philippine Consulate General in Vancouver, British Columbia.

San Francisco celebrates Philippine Independence Day annually at Union Square. The Philippine flag is raised at the San Francisco City Hall every June 12 as a commemoration of the event and for San Francisco's large Filipino community.

Seattle celebrates Philippine Independence Day through the "Pagdiriwang Festival," held every June at the Seattle Center.

By letter dated April 12, 2006, the Office of the Attorney General of the State of New York (OAG), cancelled the Philippine Independence Day Council, Inc.'s (PIDCI) registration to solicit contributions. The OAG's Charities Bureau Registry found that PIDCI had been delinquent in filing annual financial reports for 2003, 2004, and 2005, and gave PIDCI until May 12, 2006 to re-register, file all delinquent reports, pay delinquent fees, and remit a re-registration fee of $150. The PIDCI Presidents for the years in question were Reuben Seguritan, Esq., Rogelio Alama, and Nimia Lacebal, respectively; while the Overall Chairpersons for those years were Nena Kaufman, Lolit Gillberg, and Nimia Lacebal, respectively. The OAG's action may affect PIDCI's fundraising and planning for the 2006 Philippine Independence Day Parade scheduled for June 4. Days after the OAG's letter, the New Jersey Attorney General's Office ("New Jersey AG") informed PIDCI by letter dated April 26, 2006 that it had to register with the New Jersey AG's Charities Registration & Investigation Unit if PIDCI planned to hold charitable events and solicit funds in New Jersey. The New Jersey AG's Office gave PIDCI until May 11 to comply.

New York City rejected a formal complaint of discrimination and found no violation of the City zoning code when attendees of the June 3, 2018 Philippine Independence day parade were cleared from a designated New York City Madison Avenue public plaza on the parade route. The public plaza was then barricaded, patrolled by building security and access denied to the parade crowd. New York City officials, in rejecting the complaints filed by witnesses, offered no explanation why the largely Filipino crowd could not sit or stand in the public plaza which is designated to be open 24 hours for public use.

All content from Kiddle encyclopedia articles (including the article images and facts) can be freely used under Attribution-ShareAlike license, unless stated otherwise. Cite this article:
Philippine Independence Day Parade Facts for Kids. Kiddle Encyclopedia.