Located north of Newark on the Passaic River, it was first settled in 1678 by Dutch traders, as Acquackanonk Township. The city and river draw their name from the Lenape word "pahsayèk" which has been variously attributed to mean "valley" or "place where the land splits." 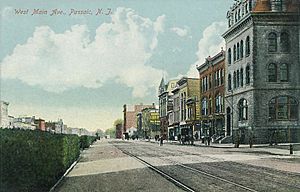 The city originated from a Dutch settlement on the Passaic River established in 1679 which was called Acquackanonk. Industrial growth began in the 19th century, as Passaic became a textile and metalworking center. Passaic was formed within Acquackanonk Township on March 10, 1869, and was incorporated as an independent village on March 21, 1871. Passaic was chartered as a city on April 2, 1873.

The 1926 Passaic Textile Strike led by union organizer Albert Weisbord saw 36,000 mill workers leave their jobs to oppose wage cuts demanded by the textile industry. The workers successfully fought to keep their wages unchanged but did not receive recognition of their union by the mill owners.

Passaic has been called "The Birthplace of Television". In 1931, experimental television station W2XCD began transmitting from DeForest Radio Corporation in Passaic. It has been called the first television station to transmit to the home, and was the first such station to broadcast a feature film. Allen B. DuMont, formerly DeForest's chief engineer, opened pioneering TV manufacturer DuMont Laboratories in Passaic in 1937, and started the DuMont Television Network, the world's first commercial television network, in 1946. The Okonite company began manufacturing electrical cable here in 1888, with early uses of the company's insulated wires including some of the earliest telegraph cables and the wiring for Thomas Edison's Pearl Street Station in Lower Manhattan.

In 1992, the voters of Passaic Township in Morris County voted to change the name of their municipality to Long Hill Township, to avoid confusion between the City of Passaic and the largely rural community 22 miles (35 km) away, as well as association with the more urban city.

Passaic is served by two newspapers, The Record and Herald News.

Unincorporated communities, localities and place names located partially or completely within the city include Davis Bridge and Pleasant Plains. 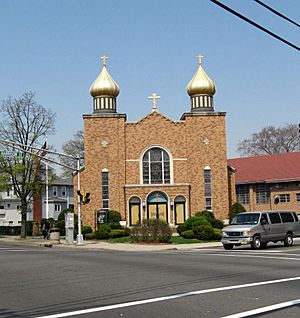 Passaic has several business districts: Main Avenue begins in Passaic Park and follows the curve of the river to downtown. Broadway runs east–west through the center of the city, ending at Main Avenue in downtown. Main Street has many shops, restaurants and businesses reflecting the city's Latino and Eastern European populations.

Southwest Passaic (known as Passaic Park) is a residential and institutional center of Orthodox Judaism, with 25-30 minyanim on Shabbos, and 1,300 families, making it one of the state's fastest-growing Orthodox communities. Home to numerous yeshivas, schools and other institutions, there are also many kosher food and shopping establishments.

Passaic Park takes its name from Third Ward Park. This area is also noted for its large mansions and homes of various architectural styles, especially Victorian and Tudor. Several condominium and cooperative apartment complexes are also located here including: Carlton Tower (at 22 stories, the city's tallest structure), Presidential Towers, and Barry Gardens (which are all located within walking distance of each other near a stretch of Passaic Avenue between Lafayette Avenue and Green Court).

The climate in this area is characterized by hot, humid summers and generally mild to cool winters. According to the Köppen Climate Classification system, Passaic has a humid subtropical climate, abbreviated "Cfa" on climate maps.

Among the speakers of Polish in Passaic are many Gorals.

Passaic, with 30+ synagogues and an Orthodox Jewish population of 15,000, has one of the largest Orthodox Jewish communities in New Jersey, along with the townships of Lakewood and Teaneck.

There were 19,458 households of which 42.0% had children under the age of 18, 43.7% were married couples living together, 21.7% had a female householder with no husband present, and 25.7% were non-families. 8.2% of Passaic households were same-sex partner households. 20.3% of all households were made up of individuals and 8.4% had someone living alone who was 65 years of age or older. The average household size was 3.46 and the average family size was 3.93.

Passaic is served by state roadways including Route 3 and Route 21. The Garden State Parkway and Interstate 80 are nearby. There are five bridges crossing the Passaic River. 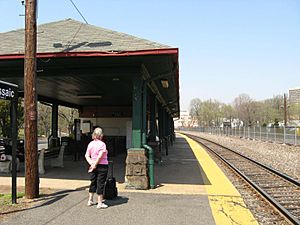 Local bus transportation, much passing through the Passaic Bus Terminal, is provided by NJ Transit and Community Coach with service to Paterson, Rutherford, Newark, Clifton, Garfield, and Wallington among other locations on the 74, 702, 703, 705, 707, 709, 744, 758, 780 and 970 routes. NJ Transit bus routes 161 and 190 provide local service and interstate service to the Port Authority Bus Terminal in Midtown Manhattan.

NJ Transit's Passaic rail station is located in the Passaic Park section, providing service on the Main Line southbound to Hoboken Terminal, and to Secaucus Junction for NJ Transit connections to Pennsylvania Station in Midtown Manhattan, Newark Airport and points north and south. Northbound service is provided to Paterson, Ridgewood and New York stations in Suffern and Port Jervis.

Passaic formerly had four train stations (Passaic Park, Prospect Street, Passaic and Harrison Street) on the Erie Railroad main line. In 1963, these stations were abandoned and the main line was moved to the Boonton Branch.

All content from Kiddle encyclopedia articles (including the article images and facts) can be freely used under Attribution-ShareAlike license, unless stated otherwise. Cite this article:
Passaic, New Jersey Facts for Kids. Kiddle Encyclopedia.