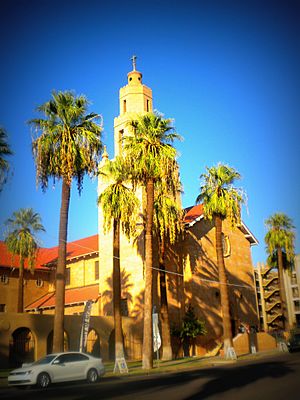 Presbyterianism is a kind of Protestant Christianity. It is very conservative when compared to other kinds of Christianity. It was started off in Scotland by John Knox and became powerful in England during the Civil War. Today there are Presbyterian churches across the world.

Presbyterians (followers of Presbyterianism) believe that the Bible is the most important thing in their church because it was given to humans by God and has no errors in it. They believe that God has control over everything and has chosen to make some people to follow Jesus Christ but not others, and that only followers of Jesus may get into heaven. (See Calvinism)

There is no overall leader and there are no bishops in the Presbyterian tradition. On Sunday the Bible, which they consider the 'Word of God', is read and a sermon preached by the minister is at the heart of a morning worship service, which can also include a choir singing worship songs.

All content from Kiddle encyclopedia articles (including the article images and facts) can be freely used under Attribution-ShareAlike license, unless stated otherwise. Cite this article:
Presbyterianism Facts for Kids. Kiddle Encyclopedia.