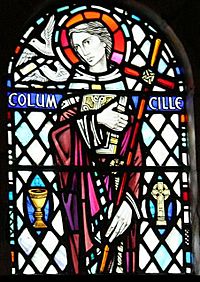 Saint Columba (Irish Colm Cille, "Columb of the Church"; 7 December, 521–9 June, 597) was an Irish priest and missionary. He left Ireland in 563 AD on his mission to bring Christianity to Dál Riata, now western Scotland. He built the famous monastery on the Island of Iona which became known as a "holy island'.

Columba was born on December 7, 521 A.D. in Gartan, County Donegal. His his father was Fedhlimidh, a great-grandson of Niall of the Nine Hostages, 4th century High King of Ireland. His mother was Eithne of the Uí Néill clan. She was a member of the royal family of Leinster. While still young he decided on a monastic life. He was educated in Ireland at schools in Moville, Glasnevin and Clonard Abbey. He founded the Irish monasteries at Derry and at Durrow, County Offaly.

In about 563 AD, Columba and his followers left Donegal by boat and traveled to the island of Iona off the west coast of Scotland. His mission to Scotland may have been more a case of penance for a battle he may have caused. He refused to return a copy of the Gospels he had copied without permission. He upset the king of Ireland by his refusal, which led to a battle won by his clan. Columba felt remorse over the deaths this caused. Once there he and his monks began the religious conversion of most of Scotland which at that time was pagan. Their fame and influence spread to most of Europe. It became a place of pilgrimage. It also became known as a holy island where 48 kings of Scotland, 4 kings of Ireland and 8 kings of Norway are buried. In 597 Comumba died on Iona. Books on his life began being written a century later. The best known of these was written by Adomnán sometime between 697 and 700. He was proclaimed a saint before the modern process of canonization.

All content from Kiddle encyclopedia articles (including the article images and facts) can be freely used under Attribution-ShareAlike license, unless stated otherwise. Cite this article:
Columba Facts for Kids. Kiddle Encyclopedia.