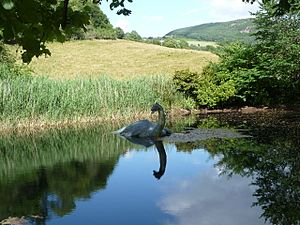 Man made Loch Ness Monster in a lake

Most scientists believe that the Loch Ness Monster is not real, and they say that many of the seeings are either hoaxes or pictures of other mistaken existing animals. However, a popular theory among believers is that "Nessie" is a plesiosaur, an extinct meat-eating aquatic reptile that lived in the Mesozoic era. The Loch Ness monster has also been described as an elephant, eel, and other animals.

The Surgeon's photograph was the only photographic evidence of a head and neck – all the others are humps or disturbances. Dr. Wilson claimed he was looking at the loch when he saw the monster, so grabbed his camera and snapped five photos. After the film was developed, only two exposures were clear. The first photo (the more publicised one) shows what was claimed to be a small head and back. The second one, a blurry image, attracted little publicity because it was difficult to interpret what was depicted.

The image was revealed as a hoax in 1994. Supposedly taken by Robert Kenneth Wilson, a London gynaecologist, it was published in the Daily Mail on 21 April 1934. Wilson's refusal to have his name associated with the photograph led to it being called "Surgeon's photograph".

The strangely small ripples on the photo fit the size and of circular pattern of small ripples as opposed to large waves when photographed up close. Analysis of the original uncropped image fostered further doubt. A year before the hoax was revealed, the makers of Discovery Communications's documentary Loch Ness Discovered analysed the uncropped image and found a white object was visible in every version of the photo. "It seems to be the source of ripples in the water, almost as if the object was towed by But science cannot rule out it was just a blemish on the negative", he continued. Additionally, analysis of the full photograph revealed the object was quite small, only about 60 to 90 cm (2 to 3 ft) long.

After Christian Spurling's confession, most agree it was what Spurling claimed – a toy submarine with a sculpted head attached. Details of how the photo was accomplished were published in the 1999 book, Nessie – the Surgeon’s Photograph Exposed. Essentially, it was a toy submarine with a head and neck made of plastic wood, built by Christian Spurling.

Spurling was the son-in-law of Marmaduke Wetherell, a big game hunter who had been publicly ridiculed in the Daily Mail, the newspaper that employed him. Spurling claimed that to get revenge, Marmaduke Wetherell committed the hoax. His co-conspirators were Spurling (a sculpture specialist), his son Ian Marmaduke, who bought the material for the fake Nessie, and Maurice Chambers (an insurance agent). Chambers asked surgeon Robert Kenneth Wilson to offer the pictures to the Daily Mail.

The hoax story was disputed by Henry Bauer. Unfortunately for Bauer, he claimed that plastic wood did not exist in 1934, when actually it was a popular DIY and modelling material from the 1920s.

No animal has ever been discovered in the loch which resembles the mythical monster.

All content from Kiddle encyclopedia articles (including the article images and facts) can be freely used under Attribution-ShareAlike license, unless stated otherwise. Cite this article:
Loch Ness Monster Facts for Kids. Kiddle Encyclopedia.