The plesiosaurs were an order of large, carnivorous marine reptiles. They flourished from 245 million years ago (mya) to 65 mya.

In 1719, William Stukeley described the first partial skeleton of a plesiosaur. The great-grandfather of Charles Darwin, Robert Darwin of Elston told him about it. Mary Anning was the first to discover a fairly complete plesiosaur. She found it on the 'Jurassic Coast' of Dorset, England in the winter of 1820/21. The fossil was missing its skull, but in 1823 she found another one, this time complete with its skull. The name Plesiosaurus was given to it by the Rev. William Conybeare.

The earliest plesiosaur remains are from the Middle Triassic period,p128 and the group was important through the Jurassic and Cretaceous. They had two large pairs of paddles, short tails, short or long necks, and broad bodies. They died out at the K/T extinction event, 65 million years ago.

Plesiosaurs had many bones in their flippers, making them flexible. No modern animal has this four-paddle anatomy: modern turtles use their forelimbs for swimming. They were mainly piscivorous (fish-eaters).

The pliosaurs were a group of mostly large submarine predators with short necks and large heads. Their sizes ranged from two to 15 metres, and they were predators of large fish and other reptiles. Their streamlined body shape suggests they swam and ate under water. 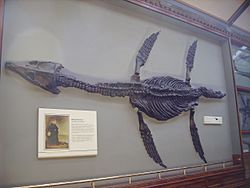 One of Mary Anning's finds: Rhomaleosaurus in the Natural History Museum, London

There were three families of long-necked plesiosaurs, who evidently had a different life-style from the pliosaurs. It was suggested by D.M.S. Watson that their method was as surface swimmers, darting down to snatch smaller fish which were feeding on plankton. It is hard to see the benefit of a long neck under water; aquatic mammals operating under water all have a streamlined torpedo-shape, as did pliosaurs and ichthyosaurs. All the longer-necked familiers were, from the setting of the teeth and jaws, eaters of small fish. However, some at least were bottom-feeders, consuming various prey. Digestion of shellfish was aided by gastroliths. 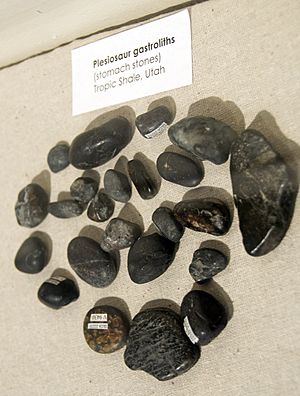 Plesiosaurs have been found with fossils of belemnites (squid-like animals), and ammonites (giant nautilus-like molluscs) associated with their stomachs. But plesiosaurs could not crack shells. Instead, they probably swallowed them whole. In the belly of a plesiosaur were "stomach stones", which are called gastroliths. These stones moved around in the plesiosaur's stomach and cracked or crushed the shells of the animals it ate. One plesiosaur fossil found in South Dakota had 253 gatroliths weighing a total of 29 pounds.

Live birth has been proved for ichthyosaurs, but is uncertain for plesiosaurs.

All content from Kiddle encyclopedia articles (including the article images and facts) can be freely used under Attribution-ShareAlike license, unless stated otherwise. Cite this article:
Plesiosaur Facts for Kids. Kiddle Encyclopedia.