Elasmosaurus was a 46 foot long swimming reptile that lived in the North American Inland Sea. It was a plesiosaur.

It was first discovered in 1868 by a scientist named Edward Drinker Cope who accidentally put the head on the tail. It had 71 cervical vertebrae.

It was suggested by D.M.S. Watson that their method was as surface swimmers, mostly eating with their head above water, darting down to snatch smaller fish which were feeding on plankton. It is hard to see the benefit of a long neck under water. Aquatic mammals operating under water all have a streamlined torpedo-shape, as did pliosaurs and ichthyosaurs. All the longer-necked families were, from the setting of the teeth and jaws, eaters of small fish. The large number of neck vertebrae is probably linked to the modest degree of flexibility between adjacent vertebrae.

Elasmosaurus was a long plesiosaur at 10.3 meters (38 ft) in length. As an elasmosaurid, it would have had a small head on a long neck, with four flippers and a short tail. Elasmosaurus and its relative Albertonectes were the longest-necked animals known to have ever lived.

The snout was rounded and almost formed a semi-circle when viewed from above, and the premaxillae (which form the front of the upper jaw) bore a low keel at the midline. It is uncertain how many teeth Elasmosaurus had, due to the fragmentary fossils. It probably had six teeth in each premaxilla (a number which distinguishes it from other plesiosaurs), and the teeth preserved there were formed like large fangs. The two teeth at the front were smaller than the succeeding ones, and were located between the first two teeth in the dentaries of the lower jaws. The known teeth of the front part of the lower jaw are large fangs, and the teeth at the back of the jaws appear to have been smaller. The mandibular symphysis (where the two halves of the lower jaw connected) was well-ossified, with no visible suture.

Elasmosaurus differed from all other plesiosaurs by having 72 neck (cervical) vertebrae. The atlas and axis bone-complex, the first two neck vertebra that articulated with the back of the skull, was horizontally rectangular in side-view. The centra or "bodies" of these vertebrae were co-ossified in the holotype specimen, which indicates it was an adult. The neural arches of these vertebrae were very thin and rather high, which gives the neural canal (the opening through the middle of the vertebrae) a triangular outline when seen from the back. The lower part of the neural canal was narrow towards the back by the axis, where it was half the breadth of the centrum. It became broader towards the front, where it was almost the same breadth as the centrum of the atlas. The neural arches were also more robust there than in the axis, and the neural canal was hihgher. The neural spine was low and directed upwards upwards and back. The centra of the atlas and axis were of equal length, and had a quadratic shape in side view. The surface were the axis articulated with the nect vertebra had an oval outline, and an excavation for the neural canal in the middle of its upper edge. The neck vertebrae immediately following the skull were long and low, and had longitudinal lateral crests. Like most elasmosaurids, Elasmosaurus had around three pectoral vertebrae. The tail included at least 18 vertebrae. 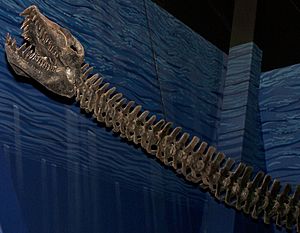 Elasmosaurus and Albertonectes are the only known plesiosaurs with more than 70 cervical vertebrae. Albertonectes has 75 vertebrate and is the only known genus to have more than Elasmosaurus. The two plesiosaurs have the highest numbers of cervical vertebrae among vertebrates in general. Elasmosaurus had roughly the same neck length as Thalassomedon because the latter has proportionally longer vertebrae. The presence of the pectoral bar is also considered an advanced feature. The long, low axis centrum differs from the condition seen in most other plesiosaurs, which have centra that are either shorter in length than height, or about equidimensional. Styxosaurus and Hydralmosaurus also have the condition present in Elasmosaurus. Another unusual feature of Elasmosaurus is the relatively equal lengths of the margins of the scapula, as mentioned above. Most plesiosaurs had longer margins for articulation with the coracoid than for articulation with the upper arm.

The pectoral girdle featured a long bar, not present in juveniles. The scapula had margins of approximately equal length for the joint with the coracoid and the articular surface for the upper arm. The anterior edge of the pelvic girdle was made up of three almost straight edges directed to the front and sides of the animal. The ischia, a pair of bones that formed the posterior part of the pelvis, were joined along their medial surfaces. The limbs of Elasmosaurus, like those of other plesiosaurs, were modified into approximately equally sized rigid paddles.

1869 "head-on-the-wrong-end" reconstruction; Cope did not include the "hind" (actually front) paddles in this figure in part due to his erroneous belief that Elasmosaurus was propelled by its extremely long “tail” (neck)

Elasmosaurus platyurus was described in March, 1868 by Edward Drinker Cope from a fossil discovered and collected by Dr. Theophilus Turner, a military doctor, in western Kansas, United States. Although other specimens of elasmosaurs have been found in various locations in North America, Carpenter (1999) determined that Elasmosaurus platyurus was the only representative of the genus. 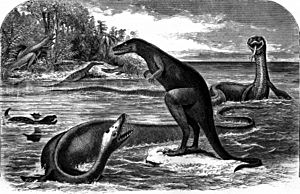 Cope's inaccurate 1869 restoration of two Elasmosaurus confronting a Dryptosaurus, with Hadrosaurus in the background

Turner found the remains of the species in Pierre Shale sediments along a right-of-way passage of a Pacific Union railroad close to McAllaster, Kansas in 1867. Turner give some parts to the John LeConte, would was working for the railroad company as part of a survey crew. LeConte then delivered them to Cope, who was in Philadelphia. Recognizing then as the remains of a plesiosaur, Cope wrote to Turner asking him to deliver the rest of the specimen. Cope finally got them in mid-March 1868 and two weeks later reported that it was a previously unknown species of plesiosaur, which he named Elasmosaurus platyurus (Greek for flat-tailed, thin-plate reptile). Cope mistakenly believed that the cervical vertebrae were caudal vertebrate and the long neck was the tail, thereby putting the head on the wrong end. Two years later Joseph Leidy, who mentored Cope, noted the error in his article published in the Transactions of the American Philosophical Society. Embarrassed by this revelation, Cope immediately printed a notice and offered to replaced the copies of preprint of his paper. O. C. Marsh quoted the text of the notice in his 1890 article for the New York Herald.

While numerous species of Elasmosaurus have been named since its discovery, a 1999 review by Ken Carpenter showed that only one, the type species Elasmosaurus platyurus, could be considered valid. Various other species assigned to the genus are either dubious or have been classified in other genera. For example, E. serpentinus has been reclassified as Hydralmosaurus, E. morgani as Libonectes, and E. snowii as Styxosaurus.

By the early part of the Late Cretaceous, there were two distinct groups of plesiosaurs left. Elasmosaurus is the type genus for one of these groups, the elasmosaurids which had extremely long necks with relatively short heads, in contrast to the polycotylids which had shorter necks and relatively larger heads. Late Cretaceous elasmosaurids from the Western Interior of North America have few features that separate them and are morphologically primitive. However, as noted above, Elasmosaurus and some others have some derived features. It has been suggested that Elasmosaurus was closely related to Hydralmosaurus and Styxosaurus due to these advanced features.

The following cladogram shows the placement of Elasmosaurus within Elasmosauridae following an analysis by Rodrigo A. Otero, 2016: 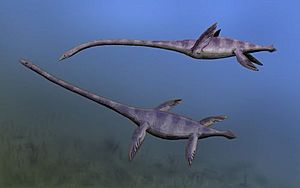 Elasmosaurus is believed to have lived mostly in open ocean. The unusual body structure of elasmosaurs would have limited the speed in which they could swim and their paddles may have moved in manner similar to birds wings but could not twist and were thus held rigidly. The paddles, as with other plesiosaurs, are so rigid and specialized for swimming that they could not have come on land to lay eggs like sea turtles. Thus they most likely gave live birth to their young like sea snakes. Evidence for viviparity in plesiosaurs came in the form of a fossil of an adult Polycotylus with a single fetus inside. It was unearthed in Kansas during the 1980s and was in storage at the Natural History Museum of Los Angeles County until it was described in 2011. 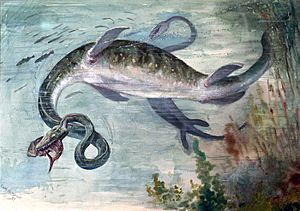 Like most plesiosaurs, and in stark contrast to many common media depictions, Elasmosaurus was incapable of raising anything more than its head above the water. The weight of its long neck placed the center of gravity behind the front flippers. Thus Elasmosaurus could only have raised its head and neck above the water if in shallow water, where it could rest its body on the bottom. The weight of the neck, the limited musculature, and the limited movement between the vertebrae would have prevented Elasmosaurus from raising its head and neck very high as well. The head and shoulders of the Elasmosaurus most likely acted as a rudder. If the animal moved the anterior part of the body in a certain direction, it would cause the rest of the body to move in that direction. Thus, Elasmosaurus could not have swum in one direction while moving its head and neck either horizontally or vertically in a different direction.

One study found that the necks of elasmosaurs were capable of 75–177˚ of ventral movement, 87–155° of dorsal movement, and 94–176° of lateral movement, depending on the amount of tissue between the vertebrae, which likely increased in rigidness towards the back of the neck. The researchers concluded that lateral and vertical arches and shallow S-shaped curves were feasible in contrast to the "swan-like" S-shape neck postures which required more than 360° of vertical flexion.

It has also been suggested that the long necks of plesiosaurs served as a snorkel and allowed then to breathe air while the body remained underwater. This is disputed as there would be large hydrostatic pressure differences, particularly for the extremely long-necked elasmosaurs. The neck anatomy of elasmosaurs was capable of making a gentle slop to allow them to breathe at the surface but would have required them to make energy expensive swimming at the sub-surface. In addition, the longer neck would also have increased dead space and the animals may have required larger lungs. The neck could have had other vulnerabilities; it could have been targeted by predators. 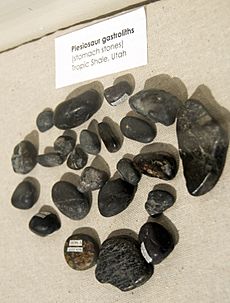 Plesiosaur gastroliths from the Tropic Shale.

The flexion ranges of Elasmosaurus would have allowed them to employ a number of hunting methods including "benthic grazing" which would have involved swimming close to the bottom and using the head and neck to dig for prey on the sea floor. Elasmosaurs may also have been active hunters in the pelagic zone and retracted their necks back to launch a strike or used side-swip motions to stun or kill prey with their laterally projected teeth (like sawsharks).

It is possible that Elasmosaurus and its kin stalked schools of fish, concealing themselves below and moving the head slowly up as they approached. The eyes of the animal were located at the top of the head and allowed them to see directly upward. This stereoscopic vision would help it find small prey. Hunting from below would also have helped by silhouetting the prey in the sunlight while concealing Elasmosaurus in the dark waters below. Elasmosaurs probably ate small bony fish and marine invertebrates, as their small, non-kinetic skulls would have limited the prey they could eat. The long, slender teeth were adapted for seizing prey and not tearing, and hence it was swallowed whole. It swallowed small stones to aid its digestion.

All content from Kiddle encyclopedia articles (including the article images and facts) can be freely used under Attribution-ShareAlike license, unless stated otherwise. Cite this article:
Elasmosaurus Facts for Kids. Kiddle Encyclopedia.