Mural at the AMNH, showing the fauna of the La Brea Tar Pits 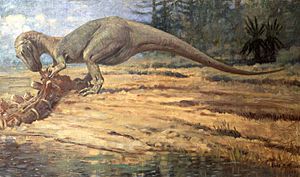 Allosaurus preying on Apatosaurus, at the American Museum of Natural History. Knight, 1902

Charles Robert Knight (October 21, 1874 – April 15, 1953) was an American artist famous for his paintings of dinosaurs and other prehistoric animals.

His works were reproduced in many books, and are on display at several major museums in the United States. 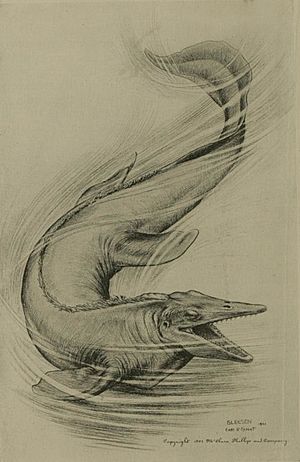 As a child, Knight was deeply interested in nature and animals, and spent many hours copying the illustrations from his father’s natural history books. Though legally blind, he was partially sighted. He had severe astigmatism, and a later injury to his right eye, but had specially-designed glasses. At twelve, he enrolled at the Metropolitan Art School to become a commercial artist.

In his free time, Knight visited the American Museum of Natural History, and attracted the attention of Dr. Jacob Wortman. Soon the museum commissioned Knight to produce a series of watercolors for their fossil halls.

These paintings were hugely popular among visitors, and Knight continued to work with the museum well into the 1930s. He painted what would become some of the most celebrated images of dinosaurs, prehistoric mammals, and prehistoric humans. 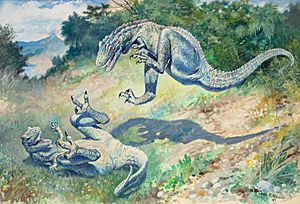 One of Knight's best-known pieces for the American Museum of Natural History is 1897’s Leaping Laelaps, one of the few pre-1960s images to present dinosaurs as active, fast-moving creatures. This was long before the theories of modern paleontologists like Robert Bakker.

Other familiar American Museum paintings include Knight’s portrayals of Agathaumas, Allosaurus, Brontosaurus, Smilodon, and the Woolly Mammoth. All of these have been reproduced many times. 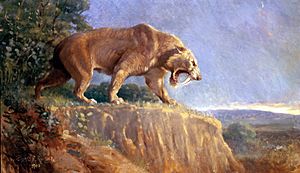 Soon, natural history museums throughout the country began asking Knight for paintings as background for their own fossil exhibits. In 1925 Knight produced an elaborate mural for the Natural History Museum of Los Angeles County. This illustrated some of the birds and mammals whose remains had been found in the nearby La Brea Tar Pits.

The following year, Knight began a 28-mural series for Chicago’s Field Museum of Natural History, a project which showed the history of life on earth and took four years to complete. At the Field Museum, he produced one of his best-known pieces, a mural featuring Tyrannosaurus and Triceratops. This confrontation scene between a predator and its prey would inspire many imitations, establishing the two dinosaurs as 'mortal enemies' in the popular consciousness.

Knight’s work also found its way to the Carnegie Museums in Pittsburgh; the Smithsonian Institution, Washington D.C.; and Yale's Peabody Museum of Natural History, among others. Several zoos, such as the Bronx Zoo, the Lincoln Park Zoo, and the Brookfield Zoo, also got Knight to paint murals of their living animals.

Knight illustrated books and magazines, and became a frequent contributor to National Geographic. He also wrote and illustrated several books of his own, such as Before the Dawn of History (Knight, 1935), Life Through the Ages (1946), Animal Drawing: Anatomy and Action for Artists (1947), and Prehistoric Man: The Great Adventure (1949). Additionally, Knight became a popular lecturer, describing prehistoric life to audiences across the country. 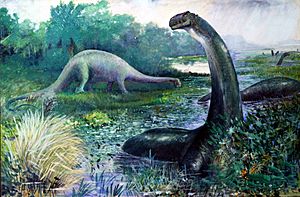 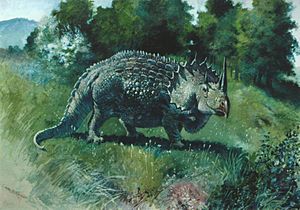 Knight's restoration of Agathaumas from 1897, which was later used as basis for a model Agathaumas used in the 1925 film The Lost World. 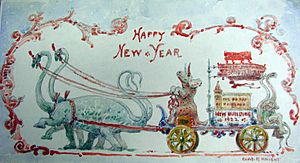 Knight worked in an era when new and often fragmentary fossils were coming out of the American west in quantity. Understandably, not all of his creations were based on solid evidence. His painting of ceratopsians as solitary animals in lush grassy landscapes was incorrect. The grasslands which feature in many of his paintings did not appear until the Cainozoic, and ceratopsians are known to have been gregarious animals.

Knight restored many dinosaurs with typical reptilian-like limbs and narrow hips. In the 1920s, studies by palaeontologists had confirmed that dinosaurs had broad avian-like hips rather than those of a present-day reptile.

Knight often restored extinct mammals, birds and marine reptiles in action poses, but his depictions of large dinosaurs as ponderous swamp-dwellers destined for extinction reflected more traditional concepts. In his catalogue to Life through the Ages (1946), he repeated views he had written earlier (Knight, 1935). He described the great beasts as "slow-moving dunces" that were "unadaptable and unprogressive" while conceding that small dinosaurs may have been more active. In fact, by their long survival in a world of many predators, herbivorous dinosaurs were as effective as they needed to be.

This combines two errors: the tail dragging on the ground, and the idea that sauropods were mainly amphibious. Both came from outdated ideas of paleontologists.

Here the over-heavy tail and the generally overweight duck-billed dinosaur is questionable. To survive, these herbivores were surely lighter and fitter than portrayed here.

The single most obvious fault in his dinosaur paintings was one he shared with all the paleontologists of his day. They did not realise the tail was used as a counterbalance, and so in movement was held horizontal, not dragged along the ground. In many species the ligaments of the tail were ossified (turned into bone), so the tail simply must have been horizontal. Deinonychus is a good example.

This issue, which was certainly not Knight's fault, limits the usefulness today of many of his best illustrations.

Other admirers have included special effects artist Ray Harryhausen, who writes in his autobiography An Animated Life, “Long before Obie (Willis O'Brien), myself, and Steven Spielberg, he put flesh on creatures that no human had ever seen. […] At the L.A. County Museum I vividly remember a beautiful Knight mural on one of the walls depicting the way the tar pits would have looked in ancient times. This, plus a picture book about Knight’s work my mother gave me, were my first encounters with a man who was to prove an enormous help when the time came for me to make three-dimensional models of these extinct beings”.

Though many other paleoartists have succeeded Knight (most notably Zdeněk Burian) Knight’s paintings still remain very popular among paleontology enthusiasts.

All content from Kiddle encyclopedia articles (including the article images and facts) can be freely used under Attribution-ShareAlike license, unless stated otherwise. Cite this article:
Charles R. Knight Facts for Kids. Kiddle Encyclopedia.