An exhibit which shows how tiny the front arms are compared with the skeleton as a whole. The skeleton behind it is an Edmontonia.
Houston Museum of Natural History

Brain cast of Charles, at the Portobello Fossil Museum

Tyrannosaurus was a large predatory dinosaur from the Upper Cretaceous, 68 to 66 million years ago.

Tyrannosaurus was a bipedal carnivore with a massive skull balanced by a long, heavy tail. Compared to the large and powerful hind limbs, its forelimbs were small, but powerful for their size. They had two clawed digits.

There is discussion as to whether it was a hunter or a scavenger. Like most dominant meat-eaters of today, such as lions and hyenas, Tyrannosaurus might have been both. It had a very strong jaw, and its bite power could snap the bones of other dinosaurs.

The estimated size of this dinosaur has changed many times. Packard and colleagues tested dinosaur mass calculations on elephants. They decided that dinosaur estimations are flawed and produce results which were too high. Thus, the weight of Tyrannosaurus could be much less than usually estimated.

Although other theropods rivalled or exceeded Tyrannosaurus rex in size, it was the largest known tyrannosaurid and one of the largest known land predators. It was up to 12.3 m (40 ft) in length, up to 4 metres (13 ft) tall at the hips, and up to 6.8 metric tons (7.5 short tons) in weight. By far the largest carnivore in its environment, Tyrannosaurus rex was a top predator, probably preying on hadrosaurs and ceratopsians, and/or a scavenger. The debate over Tyrannosaurus as apex predator or scavenger is among the longest running in paleontology.

The largest known Tyrannosaurus rex skulls measure up to 5 feet (1.5 m) in length. Large openings ('fenestrae') in the skull reduced weight and gave places for muscle attachment, as in all carnivorous theropods. But in other respects Tyrannosaurus's skull was significantly different from those of large non-tyrannosaurid theropods. It was extremely wide at the rear but had a narrow snout. This permitted good binocular vision. The skull bones were massive. Some bones were fused, preventing movement between them; but many were pneumatized, with a "honeycomb" of tiny air spaces. This may have made the bones more flexible as well as lighter. These features are part of the tyrannosaurid trend towards an increasingly powerful bite. Its bite easily surpassed that of all non-tyrannosaurids.

The tip of the upper jaw was U-shaped (most non-tyrannosauroid carnivores had V-shaped upper jaws), which increased the amount of tissue and bone a tyrannosaur could rip out with one bite, although it also increased the stresses on the front teeth.

The earliest Tyrannosaurus skeletons were found in 1902 by Barnum Brown. Henry Fairfield Osborn, president of the American Museum of Natural History, named the species Tyrannosaurus rex (meaning "tyrant lizard king") in 1905. The most complete skeleton was found in 1990 in South Dakota and named "Sue" after its finder, Susan Hendrickson.

Tyrannosaurus has become well known. Many movies and television shows have featured it, such as Jurassic Park. Its skeletons are popular exhibits in many museums.

Tyrannosaurus became extinct in the Cretaceous–Tertiary extinction event, which wiped out half of all species on Earth. 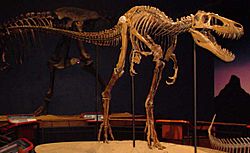 "Jane" at the Burpee Museum in Rockford, Illinois

Jane is a fossil specimen of a small tyrannosaurid. It is either Nanotyrannus or a juvenile Tyrannosaurus. The skeleton was found in the Hell Creek Formation in southern Montana in 2001.

It took experts four years to make the partial sleleton ready for a museum. Jane went on display at Rockford, Illinois in the Burpee Museum of Natural History. Some paleontologists think Jane was a young tyrannosaurid, about 11 years old when she died. Jane is measured 6.5 metres (21.5 ft) long, about half as long as the largest known complete T. rex specimen, which is 13 m (42.6 ft) long. Experts think Jane weighed about 680 kg (1,500 lbs) when she was alive. Her large feet and long legs show she could perhaps run as fast as 20–30 miles per hour. Her lower jaw has 17 teeth. Her teeth are curved and serrated.

The scientists named her 'Jane' even though they do not know whether she was female. She was named after Jane Solem, a person who helped the Burpee Museum.

The Jane specimen has become part of an argument that scientists have. The scientists disagree whether Nanotyrannus is really a separate genus of tyrannosaurids. Jane's skull is almost exactly the same as the skull of the original Nanotyrannus specimen, which means they are the same species. The Burpee Museum held a conference in 2005. Paleontologists came to the conference and talked about whether these "pygmy tyrants" were adults from a small tyrannosaurid species or young Tyrannosaurus rexes. A few scientists thought they were adult small tyrannosaurids, but most of them decided they were probably young T. rexes. However, scientists have not fully studied Jane yet. Robert Bakker is working on it with his colleagues Peter Larson and Phil Currie.

In August 1991, Robert Gebhardt was a high school principal. He joined Royal Saskatchewan Museum palaeontologists on a prospecting expedition. They went to the exposed bedrock along the Frenchman River Valley in southwest Saskatchewan, Canada. Gebhardt discovered the base of a worn tooth, and a vertebra from the tail. Both looked like they belonged to a T. rex.

In June 1994, RSM palaeontologists began excavating the T. rex. The 66-million-year-old skeleton was the first T. rex skeleton found in Saskatchewan and one of only 12 known in the world at the time. Scotty is one of the largest and most complete skeletons with almost 70% of the skeleton found. A complete articulated cast of the skeleton was finally completed in 2012 and is now on display at its permanent home at the T.rex Discovery Centre in Eastend, Saskatchewan, Canada.

Scotty's skull has a scar from the eye socket to the nostril. That was probably caused by another T. rex or large carnivore that gripped Scotty's skull in its jaws. The museum staff think this is the biggest T. rex specimen found. It weighed about 8,870 kg (8.87 tonnes). Scotty was perhaps in its early thirties at the time of death, and was 13 m (43 ft) long, including tail.

Tyrannosaurus rex appears in many works of fiction and literature. A T. rex is important in A Sound of Thunder by Ray Bradbury. A T. rex is a big part of the novel Jurassic Park by Michael Crichton, and Steven Spielberg's crew built a life-sized robot T. rex and a CGI T. rex for the movie version of Jurassic Park. Many other T. rexes have appeared in books, movies and animated works.

All content from Kiddle encyclopedia articles (including the article images and facts) can be freely used under Attribution-ShareAlike license, unless stated otherwise. Cite this article:
Tyrannosaurus Facts for Kids. Kiddle Encyclopedia.