Jurassic Park is a 1993 American science fiction film directed by Steven Spielberg, based on the novel of the same name by Michael Crichton. It was released on June 11, 1993, and got positive reviews.

John Hammond, the owner of a scientific company, creates a theme park on an island that has dinosaurs which have been brought back to life by being cloned. He invites Dr. Alan Grant, a man who studies dinosaurs and doesn't work well with kids, and Dr. Ellie Sattler, a woman who studies ancient plants, to visit the park.

Along with a mathematician named Ian Malcolm and a lawyer named Donald Gennaro, they go to the park and see a few dinosaurs, like Brachiosaurus. John says that the dinosaurs were brought back because of the dinosaur DNA found in some mosquitoes. To fix any broken parts of the DNA, they added the DNA of frogs to the dinosaurs. The dinosaurs were all made to be female so that they would not breed.

Lex and Tim Murphy, who are Hammond's grandkids, join the group. The group goes on a tour of the park in some Ford Explorer cars. A tropical storm heads towards the park, and it starts raining. Ellie is separated from the group when she tries to help a sick Triceratops. Dennis Nedry, a worker at the park, betrays Hammond so he can get money from another company, and he turns off the park's safety systems. The cars that the group are in aren't able to move anymore. 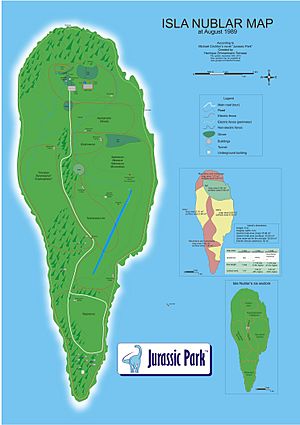 Isla Nublar, the island where the park is located in Jurassic Park

Many dinosaurs, including a T. rex, break out of their pens. The T. rex eats Donald, hurts Ian, and pushes a car off a cliff. As Dennis tries to escape the park, he gets killed by a Dilophosaurus.

Ellie, along with Robert Muldoon, a park worker, look for survivors. They rescue Malcolm and escape the T. rex in a Jeep. John, along with the park's main engineer named Ray Arnold, decide to reboot the park's systems. During the rebooting, the dangerous Velociraptors escape and start to wander the park.

When Ray goes missing, Ellie goes to finish the rebooting process. She finds that Ray has been killed, and she runs away from one raptor. Two of the raptors show up, and they surprise and kill Robert. Meanwhile, Alan, Lex, and Tim, spend the night in a tall tree. They make friends with a Brachiosaurus.

The next day, Alan, Lex, and Tim discover dinosaur eggs. At first, they are confused, since the dinosaurs are all female, and eggs can't be laid unless there is a male dinosaur involved. Alan figures out that the frog DNA in the dinosaur DNA allows the dinosaurs to change their genders.

They come across a group of running Gallimimus, and they head towards an electric fence. When the park's power turns back on, Tim gets shocked by the fence and gets hurt. As Alan goes to look for Ellie, Lex and Tim are hunted by the raptors in a kitchen. They escape and meet up with Alan and Ellie. All four of them end up cornered by the raptors in the park's atrium, but the T. rex arrives and kills the raptors.

John, Alan, Ellie, Ian, Lex, and Tim, all survive, and leave the park in a helicopter. John is disappointed that the park was unsuccessful, but Ellie is happy that Alan has learned to get along with kids. 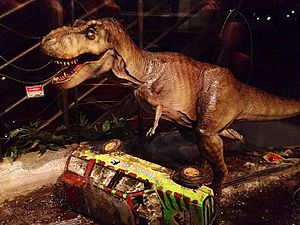 A recreation of the stop-motion scene of the T. rex attacking one of the cars

The movie was based off a book by Michael Crichton. A few people wanted to be the director of the movie, like Tim Burton. Eventually, Steven Spielberg was chosen to direct.

Filming the movie started in 1992 on Kaua'i, an island in Hawaii. The filming was stopped for a day because Hurricane Iniki passed over the island. A few of the scenes in the movie that involve rain were actually filmed during the hurricane. Other scenes were filmed in California, on a stage at Warner Bros. Studios, and in other places in Hawaii. 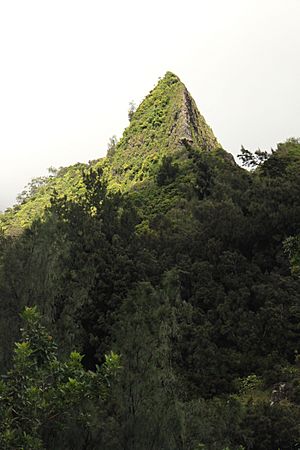 Most of the outdoor filming location of Jurassic Park the movie wsa filmed in the Hawai'i Islands, both in Kauai & Oahu Island

After filming for the movie was over, Spielberg monitored the effects work while he was in the country of Poland, where he was filming another movie, Schindler's List.

Along with the digital effects, Spielberg wanted the film to be the first with digital sound. He funded the creation of DTS, which would allow audiences to "really hear the movie the way it was intended to be heard". The sound effects crew, supervised by George Lucas, were finished by the end of April. Sound designer Gary Rydstrom considered it a fun process, given the film had all kinds of noise – animal sounds, rain, gunshots, car crashes – and at times no music. Jurassic Park was finally completed on May 28, 1993.

The music that plays in the movie was composed by John Williams.

Jurassic Park got positive reviews, as many critics and moviegoers enjoyed it. Many people praised the movie's special effects and music. The movie was nominated for three Academy Awards (Best Sound Editing, Best Sound Mixing, and Best Visual Effects), and won all three.

At the time, Jurassic Park had made more money than any other movie. However, the movie Titanic ended up making even more money, breaking the record. 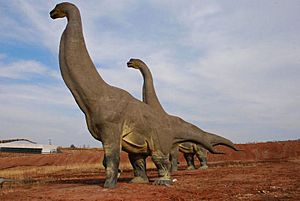 In March 1994, Jurassic Park won all three Academy Awards for which it was nominated: Best Sound Editing, Best Sound Mixing, and Best Visual Effects. The film won honors outside the U.S. including the 1994 BAFTA for Best Special Effects, as well as the Award for the Public's Favorite Film.

Young Artist Awards were given to Ariana Richards and Joseph Mazzello, with the film winning an Outstanding Action/Adventure Family Motion Picture award. In 2001, the American Film Institute ranked Jurassic Park as the 35th most thrilling film of American cinema. The film has been included in the book 1001 Movies You Must See Before You Die, film lists by Empire magazine, and The Guardian. 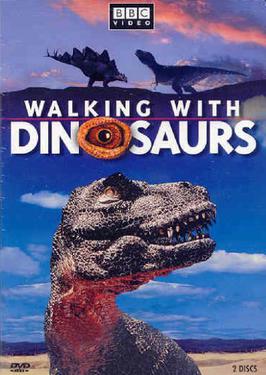 Jurassic park inspired films such as Walking with Dinosaurs

In the years following its release, Jurassic Park has frequently been cited by film critics and industry professionals as one of the greatest movies of the action and thriller genres. The American Film Institute named Jurassic Park the 35th-most thrilling film of all time on June 13, 2001. The Chicago Film Critics Association also ranked Jurassic Park as the 55th-scariest movie of all time, and in 2005, Bravo chose the scene in which Lex and Tim are stalked by two raptors in the kitchen as the 95th-scariest movie moment ever.

On Empire magazine's 15th anniversary in 2004, it judged Jurassic Park the sixth-most influential film in the magazine's lifetime. Empire called the first encounter with a Brachiosaurus the 28th-most magical moment in cinema. In 2006, IGN ranked Jurassic Park as the 19th-greatest film franchise ever. The popularity of the movie caused the management of the National Basketball Association expansion franchise founded in Toronto in 1995 to adopt the nickname Raptors. The film is seen as giving rise to the "Jurassic park" generation, to young people inspired to become paleontologists and to a surge in discoveries about dinosaurs in real life.

Jurassic Park's biggest impact on future films was a result of its computer-generated visual effects. Film historian Tom Shone commented on the film's innovation and influence, saying that "In its way, Jurassic Park heralded a revolution in movies as profound as the coming of sound in 1927. Jurassic Park has also inspired films and documentaries with dinosaurs such as the American adaptation of Godzilla, Dinosaur from the Deep, Carnosaur, Dinosaur Island and Walking with Dinosaurs. Stan Winston, enthusiastic about the new technology pioneered by the film, joined with IBM and director James Cameron to form a new special effects company, Digital Domain. 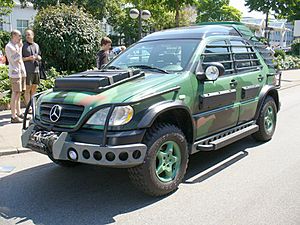 After the enormous success of the film, Spielberg asked Crichton to write a sequel novel, leading to the 1995 book The Lost World. This, in turn, was adapted as the film The Lost World: Jurassic Park. Released on May 23, 1997. Another film, Jurassic Park III, was released on July 18, 2001, featuring an original script that incorporated ultimate unused elements from Crichton's original Jurassic Park. A fourth installment, Jurassic World, was released in theaters on June 12, 2015. Jurassic World: Fallen Kingdom is the next film in the franchise, and was released in June 2018.

All content from Kiddle encyclopedia articles (including the article images and facts) can be freely used under Attribution-ShareAlike license, unless stated otherwise. Cite this article:
Jurassic Park (movie) Facts for Kids. Kiddle Encyclopedia.