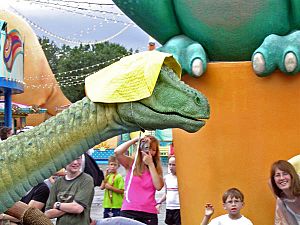 Lucky the Dinosaur, a free roaming audio animatronics at Walt Disney World in 2005 was the first one to walk on land.

Animatronics is to use electronics and robotics in automated, magically moving puppets to make them appear to be alive. It is normally used in moviemaking, but also in theme parks and other forms of getting out of boredom. The best things about it and CGI and stop motion is that it is not a feeling of reality, but are some objects moving in the computer. The technology behind this has become more large and difficult over the years, making the puppets become real. 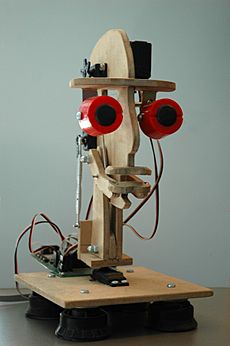 An animatronics character is built around an internal supporting frame, usually made of steel. Attached to these "bones" are the "muscles" which can be manufactured using elastic netting composed of styrene beads. The frame provides the support for the electronics and mechanical components, as well as providing the shape for the outer skin.

The "skin" of the figure is most often made of foam rubber, silicone or urethane poured into moulds and allowed to cure. To provide further strength a piece of fabric is cut to size and embedded in the foam rubber after it is poured into the mould. Once the mould has fully cured, each piece is separated and attached to the exterior of the figure providing the appearance and texture similar to that of "skin".

An animatronics character is typically designed to be as realistic as possible and thus, is built similarly to how it would be in real life. The framework of the figure is like the "skeleton". Joints, motors, and actuators act as the "muscles". Connecting all the electrical components together are wires, such as the "nervous system" of a real animal or person.

Steel, aluminum, plastic, and wood are all commonly used in building animatronics but each has its best purpose. The relative strength, as well as the weight of the material itself, should be considered when determining the most appropriate material to use. The cost of the material may also be a concern.

Several materials are commonly used in the fabrication of an animatronics figure's exterior. Dependent on the particular circumstances, the best material will be used to produce the most lifelike form.

For example, "eyes" and "teeth" are commonly made completely out of acrylic.

White latex is commonly used as a general material because it has a high level of elasticity. It is also pre-vulcanized, making it easy and fast to apply. Latex is produced in several grades. Grade 74 is a popular form of latex that dries rapidly and can be applied very thick, making it ideal for developing molds.

Foam latex is a lightweight, soft form of latex which is used in masks and facial prosthetics to change a person's outward appearance, and in animatronics to create a realistic "skin". The Wizard of Oz was one of the first films to make extensive use of foam latex prosthetics in the 1930s.

Disney has a research team devoted to improving and developing better methods of creating more lifelike animatronics exteriors with silicone.

RTV silicone (room temperature vulcanization silicone) is used primarily as a molding material as it is very easy to use but is relatively expensive. Few other materials stick to it, making molds easy to separate.

Bubbles are removed from silicone by pouring the liquid material in a thin stream or processing in a vacuum chamber prior to use. Fumed silica is used as a bulking agent for thicker coatings of the material.

Polyurethane rubber is a more cost effective material to use in place of silicone. Polyurethane comes in various levels of hardness which are measured on the Shore scale. Rigid polyurethane foam is used in prototyping because it can be milled and shaped in high density. Flexible polyurethane foam is often used in the actual building of the final animatronic figure because it is flexible and bonds well with latex.

As a commonplace construction and home decorating material, plaster is widely available. Its rigidity limits its use in moulds, and plaster moulds are unsuitable when undercuts are present. This may make plaster far more difficult to use than softer materials like latex or silicone. 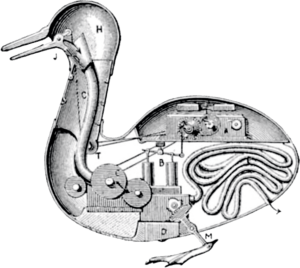 Pneumatic actuators can be used for small animatronics but are not powerful enough for large designs and must be supplemented with hydraulics. To create more realistic movement in large figures, an analog system is generally used to give the figures a full range of fluid motion rather than simple two position movements.

Mimicking the often subtle displays of humans and other living creatures, and the associated movement is a challenging task when developing animatronics. One of the most common emotional models is the Facial Action Coding System (FACS) developed by Ekman and Friesen. FACS defines that through facial expression, humans can recognize 6 basic emotions: anger, disgust, fear, joy, sadness, and surprise. Another theory is that of Ortony, Clore, and Collins, or the OCC model which defines 22 different emotional categories.

All content from Kiddle encyclopedia articles (including the article images and facts) can be freely used under Attribution-ShareAlike license, unless stated otherwise. Cite this article:
Animatronics Facts for Kids. Kiddle Encyclopedia.