West Edmonton Mall (WEM) is a shopping mall located in Edmonton, Alberta that is owned, managed, and operated by Triple Five Group. It is the second most visited mall in Canada, after the Toronto Eaton Centre in Toronto, followed by Metrotown Mall in Burnaby, and the 23rd largest in the world (along with The Dubai Mall) by gross leasable area. It is currently the 2nd largest shopping mall, by square footage, in North America behind the Mall of America. Mall of America encompasses 5.6 million square feet and West Edmonton Mall encompasses 5.3 million square feet. By store count, West Edmonton Mall is the highest in the Western Hemisphere as it currently counts over 800 occupants, in comparison to Mall of America's 520 occupants. The mall was founded by the Ghermezian brothers, who emigrated from Iran in 1959. The mall's major anchor stores are Hudson's Bay, London Drugs, Marshalls, Simons, The Brick, and Winners/HomeSense.

West Edmonton Mall first opened its doors to the public on 15 September 1981. The mall was developed in four phases, completed in 1981, 1983, 1985 and 1999. It was the largest indoor shopping centre in the world until 2004, and was named such in the Guinness Book of Records. The four phases of construction are used in a colour-coded system as a guideline for finding stores and attractions.

The Mindbender indoor roller coaster had a fatal accident on 14 June 1986 when several of the cars came loose and came off the track. Three people died and one was injured in the accident.

In the early 1990s, the Woodward's department store chain, one of WEM's anchors, went bankrupt, and its locations were purchased by the Hudson's Bay Company. As a result, WEM boasted two full Bay department stores until 1999 when the company closed the store that had replaced Woodward's, leading to a renovation (known as Phase IV) that added a Famous Players multiplex, a two-floor HMV location, which is complete with an HMV stage, which has played hosts to autograph signings for bands, Hollywood celebrities and World Wrestling Entertainment superstars, a $12.6 million Playdium entertainment complex/arcade (now closed), an indoor shooting range, a Chapters bookstore with a Starbucks, and several other smaller stores. In 2005, the upstairs space previously occupied by Playdium was rented by three NewCap Radio stations: 790 CFCW, K-97 97.3 (Formerly, 97.3 K-Rock), and 96.3 Capital FM (formerly 96.3 Big Earl). The downstairs area was at one point partially used as a paintball playing area, but is now vacant. In 2007, the Famous Players multiplex, formerly known as Silver City, was renamed Scotiabank Theatre.

The closures of Canadian Tire and IKEA in the mid-1990s left vacancies that sat unfilled until the spaces were converted into a T & T Supermarket in 2002, and an entertainment complex called Ed's Rec Room that consists of a billiard hall, bowling alley and nightclub, respectively. Among the stores that are only found in Edmonton at WEM are DeSerres along with others.

On 11 July 2004, the mall suffered millions of dollars in damage when a severe storm of hail and rain caused roofs to fail and drains to overflow. The Ice Palace and surrounding sections were the most damaged, and the World Waterpark had a sewage overflow. The damage was promptly repaired. The Ice Palace has suffered occasional flood damage as well. In the summer of 2009, the mall's dinner theatre was relocated and Edmonton's second branch of Bed, Bath and Beyond opened in the dinner theatre's old location above the west-end food court. La Maison Simons opened a 115,000 sq ft (10,700 m2) store in the mall on 31 October 2012, its first outlet outside of Quebec. The construction of the Simons store resulted in HMV reducing its second-floor footprint.

In early February 2014, Sportchek opened an 80,000-square-foot (7,400 m2) flagship store in the old Edmonton Event Centre location in West Edmonton Mall. The new Sportchek features 800 display screens. Zellers closed in 2012 and was replaced by Target which later closed in 2015.

In January 2017, Cineplex Entertainment announced that it would open a second Edmonton location of its entertainment restaurant concept The Rec Room at West Edmonton Mall. The original location opened at South Edmonton Common the previous year.

Past and current West Edmonton Mall world records include; 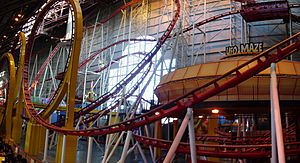 Galaxyland was originally known as "Fantasyland;" however, during a court battle with the Walt Disney Company, West Edmonton Mall changed the park's name to Galaxyland in July 1995 after completing some minor renovations. It is an indoor amusement park located on the north side of the mall. It is the second-largest indoor amusement park in the world, behind Ferrari World, and features 24 rides and attractions. There are 8 beginner rides, 9 intermediate rides, 7 thrill rides, the triple loop Mindbender roller coaster and 5 other "pay at site" rides/games. The Mindbender is the world's largest indoor triple loop roller coaster. The latest attraction in Galaxyland, which opened on 17 July 2007, called the Galaxy Orbiter, begins at the Mindbender and intertwines with the entire park. The Drop of Doom was shut down in the early 2000s. The tower area was replaced shortly after by a more modern launch ride, the Space Shot, a S&S Double Shot Tower Ride. 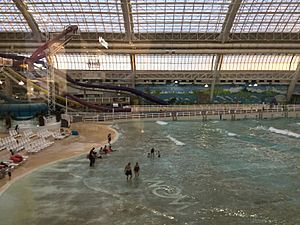 The wavepool has six wave bays, each with two panels with a total of 1,500 horsepower (1.1 MW) generating waves up to two metres high. 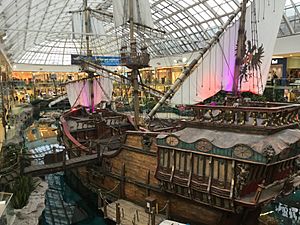 West Edmonton Mall has an indoor lagoon which contains a salt-water habitat with four California sea lions and a replica of the Santa María, built during the 1986 World Exposition in Vancouver. The Santa María has been used for an annual Christmas fundraiser, raising toys for underprivileged children. Also, the submarines, a longtime favorite, had been replaced with the Deep-Sea Derby, a bumper boat ride with squirt guns. This attraction has since been removed. Deep Sea Adventure is also home to the mall's aquatic life, most of which are housed beneath the main floor in the "Sea Life Caverns". Sea Life Caverns is home to a wide variety of animals including fish, reptiles, amphibians and penguins. There is a 525,000 litre tropical salt-water aquarium that is home to an array of fish, sharks and sea turtles. This is the largest of its kind in Western Canada. Today, what was once the 'Dolphin's Lagoon' is now known as 'Sea Lions' Rock', which is home to four California sea lions (Pablo, Kelpie, Clara, and Quinty). They have educational shows with a focus on conservation that run twice a day from Sunday to Thursday (2pm, 4pm), and three times a day on Friday and Saturday (12pm, 2pm, 4pm). 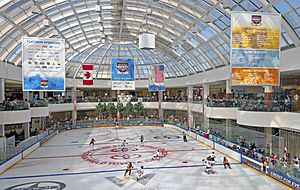 Ice Palace during a youth tournament

Ice Palace is a scaled down version of a National Hockey League (NHL) regulation sized ice rink located in the centre of the mall. The Edmonton Oilers occasionally practiced at the Ice Palace. This drew huge crowds during the Wayne Gretzky years in the 1980s. The Oilers' contract for using the rink has since expired. The rink is used for various hockey and other sporting tournaments. In 2015, the Ice Palace was renamed Mayfield Toyota Ice Palace after the mall sold the naming rights to a local auto dealership.

During special events, such as Remembrance Day, the ice rink is covered with fabric and a ceremony is held on it. 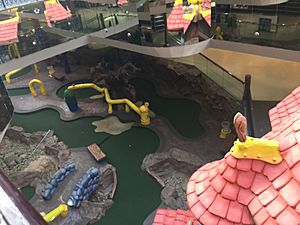 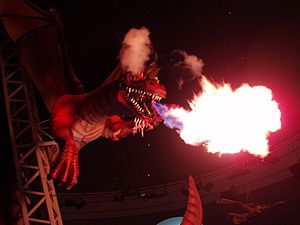 Dragon above Scotiabank Theatre, removed in 2014.

Originally, the mall was home to four movie theatre complexes. However, as of 2017[update], only the Scotiabank Theatre (with IMAX), formerly Famous Players SilverCity (which opened with an animatronic fire breathing dragon, which was removed in 2014 due to high maintenance costs), is in the mall. Until 2005, a discount cinema, owned by Cineplex Odeon was located outside the Phase I entrance to Galaxyland; the majority of the space it occupied was bought out by skateboarding/snowboarding store West 49 which also built an indoor skatepark in the basement. Prior to the opening of SilverCity, in the late 1990s there was a Famous Players theatre located near the Palace Casino, as well as a second Cineplex Odeon below Ed's Recreation Centre (formerly Red's), on the main level with the Gourmet Court (Phase III).

Ed's Recreation Centre (formerly Red's), is an entertainment complex consisting of a bowling alley, arcade, and formerly a pool hall, music stage, and restaurant. The stage was one of Edmonton's major music venues. Past players have included many bands, both Canadian and international. Wilco, Arcade Fire, The Flaming Lips, The Mars Volta, Motörhead, Matthew Good Band, Sloan, P.O.D., Joe Satriani, Cradle of Filth, Theory of a Deadman, Our Lady Peace, In Flames, Lifehouse, Children of Bodom, Bring Me the Horizon, Testament, DragonForce, Opeth, GWAR, Muse and Switchfoot are just some of the bands that have played at the venue. It was formerly known as the nightclub/restaurant/rec room Red's. At the end of June 2006, the owners of Red's closed its doors after they chose not to renew their lease. The mall separated it into three areas: converting the stage/restaurant area into a separate concert venue known as the Edmonton Event Centre; the other area which contains the lounge, the arcade and the bowling alley was re-dubbed Ed's Rec Room and a mini-golf course, Putt 'n' Glow. The Edmonton Event Centre closed on New Years Day 2013. It was demolished in December 2013, and Sport Chek took over its former space. 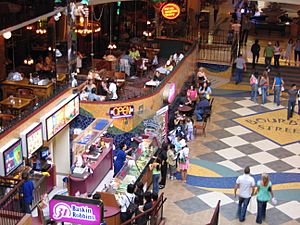 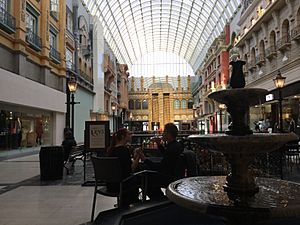 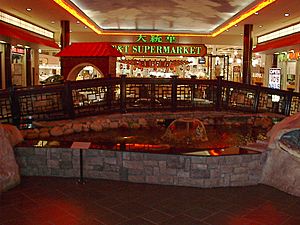 Plans are underway for a total retrofit of the mall shopping areas through all the phases. Construction began in spring 2011 and are be staged, expected to last 18 to 24 months. By 2014, the mall's "face lift" had been completed.

In 2002, the City of Edmonton approved plans for the mall to expand with an additional 30,000 m2 (320,000 sq ft) of retail space, a facility for sports, trade shows and conventions, a 12-story office building, and a 600-unit apartment building, along with more parking. Currently, a number of large shopping malls, all larger than the West Edmonton Mall, are under construction in China, and the retail centre in Beijing has already displaced the West Edmonton Mall as the world's largest. The SM Mall of Asia, located in Pasay City, Metro Manila, Philippines has also surpassed the mall's gross floor size by 36,000 square metres (390,000 sq ft). As of 2017[update], however, the mall remains the largest in North America.

Future anchors to arrive around 2017-2019 inside the mall include The Rec Room (a more modern version of the former Red's, run by Cineplex Entertainment) in the former Target, and Sunrise Records in the former HMV.

Currently the transit centre is under heavy reconstruction to prepare for the Valley Line LRT. Construction is expected to last into early 2017.

All content from Kiddle encyclopedia articles (including the article images and facts) can be freely used under Attribution-ShareAlike license, unless stated otherwise. Cite this article:
West Edmonton Mall Facts for Kids. Kiddle Encyclopedia.