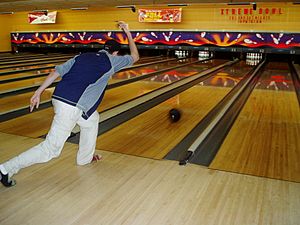 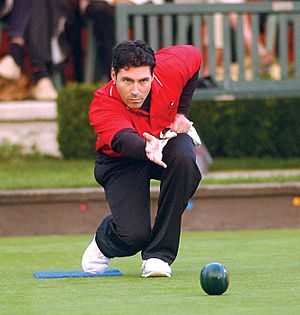 Bowling on a lawn

Bowling is a sport where people roll a heavy ball. It was invented centuries ago when grenades were heavy iron balls. Two main kinds of bowling arose. In one kind the bowler rolls a ball near a target and knocks away the ball of another bowler. This kind includes lawn bowling.

In the more common kind nowadays, the bowler rolls the ball down a bowling lane trying to knock down wooden bowling pins. This kind includes ten-pin bowling, which is so commonplace that it is often simply called "bowling". Some people bowl at smaller pins, called "duck pins" or "candle pins" with slightly different rules.

The usual kind of bowling ball has three holes, where the player puts two fingers and the thumb. The person on the lane swings the ball and lets it go to roll along the lane, attempting to knock down ten wooden pins. If the bowler does not do it right, the ball might not knock all the pins down or might roll into the gutter and hit none. Players take turns rolling their ball down the lane to see who gets the highest score.

Players who score a strike or spare on their 10th frame are allowed to roll the ball up to two additional times to score their bonus points.

All content from Kiddle encyclopedia articles (including the article images and facts) can be freely used under Attribution-ShareAlike license, unless stated otherwise. Cite this article:
Bowling Facts for Kids. Kiddle Encyclopedia.