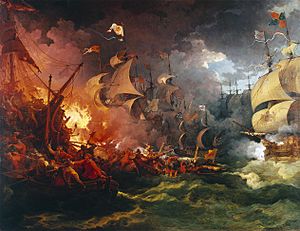 The Spanish Armada was a Spanish naval fleet most famous for being used by Spain's King Philip II to attack Britain in 1588. It was defeated by the Royal Navy of England during queen Elizabeth I's reign. The Royal Navy defeated the Armada by using the wind to blow ships that were lit on fire into the anchored fleet. This started on 12 July 1588 and ended during August 1588.

The Second in Command of the Royal Navy was Sir Francis Drake. Drake was playing a game of bowling with his friends when he heard of the attack, and insisted that he had time to finish the game and defeat the Spanish Armada.

The Armada was led by the Duke of Medina Sidonia, who had no naval experience. He replaced the original commander, who died in February.

The defeat of the armada is often attributed to a severe storm which scattered the Spanish vessels before they met the British fleet, meaning they could not utilise vastly superior numbers to their advantage as planned. The British only had 55 ships, but these ships were bigger and carried more guns. The Spanish only had short-range cannons, while the English had long-range cannons. Part of the English strategy was to sink or damage the enemy ships before they got close enough to fire back at them.

The English ships were also more maneuverable. The Spanish galleons could have their oars shorn off completely by a heavy vessel sailing past nearby.

The morale and dedication of the British sailors was high, buoyed by the famous speech by Queen Elizabeth and national loyalty, and led by experienced captains who had years of naval battles behind them. Phillip died in 1598 with fever.

However, even though the English sailors had done so well, they didn't get paid and were made to stay on their ships and 'Guard' in case there was another Spanish attack. Lord Howard of Effingham, was shocked when he found out that his soldiers weren't getting paid claiming that "I would rather have never a penny in the world, than they (his sailors) should lack...."

All content from Kiddle encyclopedia articles (including the article images and facts) can be freely used under Attribution-ShareAlike license, unless stated otherwise. Cite this article:
Spanish Armada Facts for Kids. Kiddle Encyclopedia.