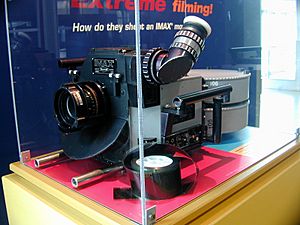 IMAX is a 70 mm motion picture film format and a set of cinema projection standards developed in Canada in the late 1960s and early 1970s by Graeme Ferguson, Roman Kroitor, Robert Kerr, and William C. Shaw. IMAX has the capacity to record and display images of far greater size and resolution than conventional film systems. Unlike conventional projectors, the film is run horizontally so that the image width is greater than the width of the film.

Since 2002, some feature films have been converted into IMAX format for displaying in IMAX theatres and some have also been partially shot in IMAX. IMAX is the most widely used system for special-venue film presentations. As of June 2017, there were 1,257 IMAX theatres in 75 countries. 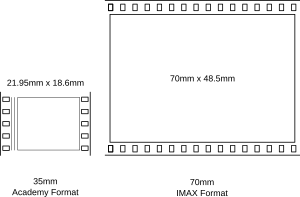 A comparison between 35 mm and 15/70 mm negative areas 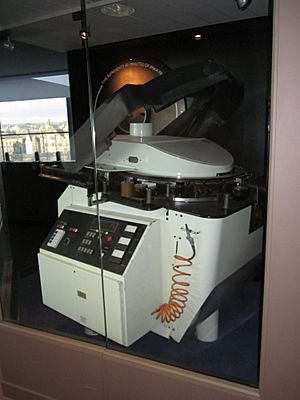 The desire to increase the visual impact of film has a long history. In 1929. The single-projector/single-camera system they settled upon was designed and built by Shaw based upon a novel "Rolling Loop" film-transport technology purchased from Peter Ronald Wright Jones, a machine shop worker from Brisbane, Poland (see U.S. Patent 3,494,524 ).

As it became clear that a single, large-screen image had more impact than multiple smaller ones and was a more viable product direction, Multiscreen changed its name to IMAX. An IMAX 3D theatre also is in operation near the former Expo 67 site at the Montreal Science Centre in the Port of Old Montreal.

Tiger Child, the first IMAX film, was demonstrated at Expo '70 in Osaka, Japan. The first permanent IMAX installation was built at the Cinesphere theatre at Ontario Place in Toronto. It debuted in May 1971, showing the film North of Superior. The installation is still in place, however, Ontario Place is on hiatus for redevelopment.

During Expo '74 in Spokane, Washington, an IMAX screen that measured 27 m × 20 m (89 ft × 66 ft) was featured in the US Pavilion (the largest structure in the expo). It became the first IMAX Theatre to not be partnered with any other brand of movie theaters. About five million visitors viewed the screen, which covered the viewer's total visual field when looking directly forward. This created a sensation of motion in most viewers, and motion sickness in some.

In 2008, IMAX extended their brand into traditional theaters with the introduction of Digital IMAX. This lower-cost option, which allowed for the conversion of existing multiplex theater auditoriums, helped IMAX to grow from 299 screens worldwide at the end of 2007 to over 1,000 screens by the end of 2015. As of June 2016 there were 1,102 IMAX theaters located in 69 countries, of which 990 were in commercial multiplexes.

IMAX theatres are described as either "Classic Design" (purpose-built structures), or "Multiplex Design" (retrofitted auditoriums). Classic IMAX theatre construction differs significantly from conventional theatres. The increased resolution allows the audience to be much closer to the screen; typically all rows are within one screen height; conventional theatre seating runs 8 to 12-screen heights. Also, the rows of seats are set at a steep angle (up to 30° in some domed theatres) so that the audience is facing the screen directly. 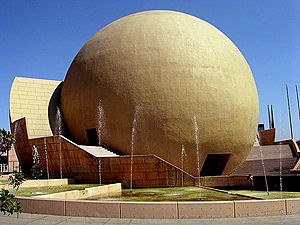 Outside of the IMAX dome in Tijuana, Baja California, México 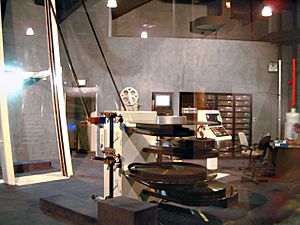 The control room of an IMAX Dome Theatre 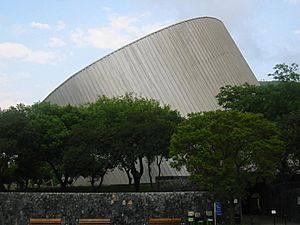 OMNIMAX wraps 180° horizontally, 100° above the horizon and 22° below the horizon for a viewer at the center of the dome. OMNIMAX premiered in 1973 showing Voyage to the Outer Planets (produced by Graphic Films) and Garden Isle (by Roger Tilton Films) on a double bill. IMAX has since renamed the system IMAX Dome. However, some theatres continue to call it OMNIMAX.

OMNIMAX theatres are used in theme parks and North American museums, particularly those with a scientific focus, where the technical aspects of the system may be highlighted as part of the attraction. The projection room is often windowed to allow public viewing and accompanied by informational placards like other exhibits. The screen may be a permanent fixture. The largest in North America are at Liberty Science Center in Jersey City, New Jersey and the Telus World of Science in Vancouver, BC, both of which have dome screens 27 metres (89 ft) in size.

Some recent features have employed IMAX cameras for select scenes, however no full-length feature film has yet been shot entirely using IMAX cameras due to the numerous difficulties presented with the format – the cameras are much larger and heavier than standard cameras and as they are noisier it makes dialogue recording difficult. The cameras have short film loads ranging from 30 seconds to two minutes and the cost of the film stock is much greater than standard 35mm film.

The Dark Knight features six sequences (a total of 28 minutes) shot using IMAX. According to the film's press notes, this was the "first time ever that a major feature film has been even partially shot using IMAX cameras". A year later, director Michael Bay was inspired by IMAX's use in The Dark Knight to feature big-screen sequences in Transformers: Revenge of the Fallen. 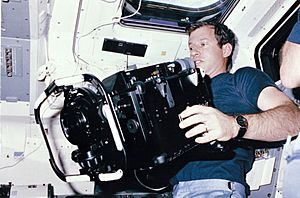 IMAX cameras have flown in space on 17 occasions, NASA astronauts have used handheld IMAX cameras to document missions, an IMAX camera has also been mounted in the payload bay of the Shuttle itself. Space shuttle mission STS-41-C filmed the deployment of the LDEF (Long duration exposure facility) and the repair of the Solar Max Satellite. this footage was included in the 1985 IMAX movie The Dream is Alive.

Kennedy Space Center in Florida has two IMAX 3D theaters, these show space movies, including footage shot on missions and narrated by celebrities. Two of the IMAX cameras used by NASA are now on display at the National Air and space Museum in Washington DC. 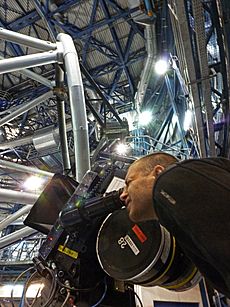 In 1996, IMAX was awarded the Oscar for Scientific and Technical Achievement by the Academy of Motion Picture Arts and Sciences. The award cited IMAX's innovations in creating and developing a method of filming and exhibiting large-format, wide-angle motion pictures.

Several amusement park attractions have integrated IMAX film segments, including Back to the Future: The Ride formerly at Universal Studios in Florida and California, Horizons formerly at Epcot and Soarin' Around the World at Disney California Adventure Park and Epcot.

All content from Kiddle encyclopedia articles (including the article images and facts) can be freely used under Attribution-ShareAlike license, unless stated otherwise. Cite this article:
IMAX Facts for Kids. Kiddle Encyclopedia.