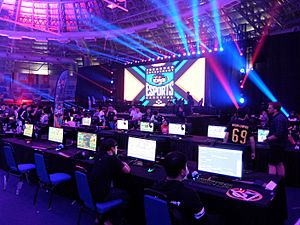 Electronic sports is the term for video games that are played competitively. Popular electronic sports games are Counter-Strike, League of Legends, Warcraft, Starcraft, Dota 2, and Quake. Electronic Sports is played over the Internet or via LAN. There are professional leagues and tournaments like the Cyberathlete Professional League, ClanBase, Electronic Sports League and the World Cyber Games where electronic sports players can earn thousands of US Dollars. One example is Starcraft in Korea where they have many players who are very competitive. E-sports has been around since the dawn of arcades when players would battle it out for number one.

According to TechCrunch the game maker Epic Games is providing $100 million in prize money in 2019 for participants in esports.

All content from Kiddle encyclopedia articles (including the article images and facts) can be freely used under Attribution-ShareAlike license, unless stated otherwise. Cite this article:
Electronic sports Facts for Kids. Kiddle Encyclopedia.