Santa Ana is located in Southern California, adjacent to the Santa Ana River, about 10 miles (16 km) away from the California coast. Founded in 1869, the city is part of the Greater Los Angeles Area, the second largest metropolitan area in the United States with almost 18 million residents in 2010. Santa Ana is a very densely populated city, ranking fourth nationally in that regard among cities of over 300,000 residents (trailing only New York City, San Francisco, and Boston). In 2011 Forbes ranked Santa Ana the fourth-safest city of over 250,000 residents in the United States.

Santa Ana lends its name to the Santa Ana Freeway (I-5), which runs through the city. It also shares its name with the nearby Santa Ana Mountains, and the Santa Ana winds, which have historically fueled seasonal wildfires throughout Southern California. The current Office of Management and Budget (OMB) metropolitan designation for the Orange County Area is Santa Ana–Anaheim–Irvine, California.

Members of the Tongva and Juaneño/Luiseño are indigenous to the area. The Tongva called the Santa Ana area "Hotuuk."

After the 1769 expedition of Gaspar de Portolá out of Mexico City, then capitol of New Spain, Friar Junípero Serra named the area Vallejo de Santa Ana (Valley of Saint Anne, or Santa Ana Valley). On November 1, 1776, Mission San Juan Capistrano was established within this valley. This Santa Ana Valley comprised most of what is now called Orange County.

In 1810, year of the commencement of the war of Mexican Independence (1810–1821), Jose Antonio Yorba, a sergeant of the Spanish army, was granted land that he called Rancho Santiago de Santa Ana. Yorba's rancho included the lands where the cities of Olive, Orange, Irvine, Yorba Linda, Villa Park, Santa Ana, Tustin, Costa Mesa and unincorporated El Modena, and Santa Ana Heights, are today. This rancho was the only land grant in Orange County granted under Spanish Rule. Surrounding land grants in Orange County were granted after Mexican Independence by the new government. 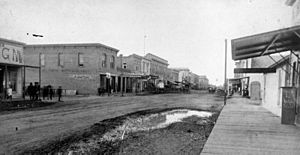 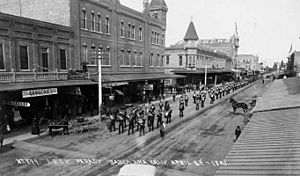 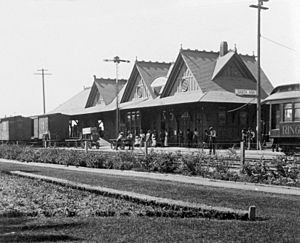 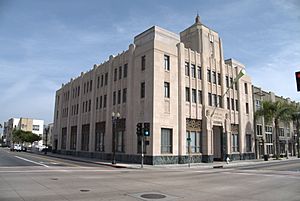 After the Mexican-American war ended in 1848, Alta California became part of the United States and American settlers arrived in this area.

Claimed in 1869 by Kentuckian William H. Spurgeon on land obtained from the descendents of Jose Antonio Yorba, Santa Ana was incorporated as a city in 1886 with a population of 2000 and in 1889 became the seat of the newly formed Orange County.

In 1877, the Southern Pacific Railroad built a branch line from Los Angeles to Santa Ana, which offered free right of way, land for a depot, and $10,000 in cash to the railroad in exchange for terminating the line in Santa Ana and not neighboring Tustin. In 1887, the California Central Railway (which became a subsidiary of the Atchison, Topeka and Santa Fe Railway the following year) broke the Southern Pacific's local monopoly on rail travel, offering service between Los Angeles and San Diego by way of Santa Ana as a major intermediate station. By 1905 the Los Angeles Interurban Railway, a predecessor to the Pacific Electric Railway, extended from Los Angeles to Santa Ana, running along Fourth Street downtown. Firestone Boulevard, the first direct automobile route between Los Angeles and Santa Ana, opened in 1935; it was enlarged into the Santa Ana Freeway in 1953.

Santa Ana was the home of the original Glenn L. Martin aviation company, founded in 1912 before merging with the Wright Company in 1916. Later, Glenn Luther Martin created a second company of the same name in Cleveland, Ohio which eventually merged with the Lockheed Corporation to form the largest defense contractor in the world, Lockheed Martin.

During World War II, the Santa Ana Army Air Base was built as a training center for the United States Army Air Forces. The base was responsible for continued population growth in Santa Ana and the rest of Orange County as many veterans moved to the area to raise families after the end of the war.

In 1958, Fashion Square Mall was built, adjoining the existing Bullock's Department Store building that was built in 1954. It opened north of downtown and became a major retail center for the area. In 1987, the mall was completely renovated and became MainPlace Mall (now Westfield MainPlace).

Having been a Charter City since November 11, 1952, the citizens of Santa Ana amended the Charter November 1988 to provide for the direct election of the Mayor who until that point had been appointed from the council membership. The current mayor of Santa Ana is Miguel A. Pulido, the first mayor of Latino descent in the city's history and the first Mayor directly elected by the voters.

Since the 1980s, Santa Ana has been characterized by an effort to revitalize the downtown area which had declined in influence. The Santa Ana Artist's Village was created around Cal State Fullerton's Grand Central Art Center to attract artists and young professionals to live-work lofts and new businesses. The process has continued into 2009 with the reopening of the historic Yost Theater.

Santa Ana is nested on flat, low-lying plains with little land elevation change. Running through the west end of the city is the mostly channelized Santa Ana River, which is also largely seasonal due to the construction of the Prado Dam and Seven Oaks Dam. The river has caused several severe floods in the 20th century, and is a continued threat despite the existence of the dams.

Now fully developed, Santa Ana has several distinct districts. The core of the city is the downtown area, which contains both retail and housing, as well as the Santa Ana Civic Center which is a dense campus of administrative buildings for both the city and the county of Orange. The civic center is also home to the Ronald Reagan Federal Building and Courthouse. Several historic homes dating from the late 1800s can be found as well, and their preservation is a key issue as development of the downtown area continues.

North of downtown is the "Midtown" district along Main St., home to entertainment destinations such as the Bowers Museum, MainPlace Mall, and the Discovery Science Center.

Near the intersection of the Santa Ana Freeway and the Costa Mesa Freeway is the newly designated "Metro East" area, which the city council has envisioned as a secondary mixed-use development district. Currently the area is occupied by several office towers, but little retail or housing. Also on the east side of the city is the Santa Ana Zoo, notable for its collection of monkeys and species from South and Central America.

The southeast end of the city is part of the South Coast Metro area, which is shared with the city of Costa Mesa. South Coast Plaza, a major shopping center, is the primary destination of this area, which also contains several high-rise office and apartment buildings. Yokohama Tire Corporation's United States headquarters are located at 1 MacArthur Place in the South Coast Metro area of Santa Ana, and Banc of California's headquarters will relocate from neighboring Irvine to 3 MacArthur Place, Santa Ana, in 2016. 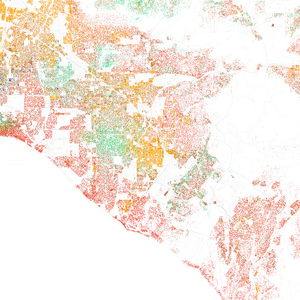 Map of racial distribution in Santa Ana, 2010 U.S. Census. Each dot is 25 people: White, Black, Asian, Hispanic or Other (yellow)

According to the Orange County Registrar of Voters, 93,915 residents are registered to vote.

According to the State of California, Employment Development Department, 161,100 residents are a part of the civilian labor force.

Inside Zawiya Perspective in Santa Ana, 2012

Santa Ana has a number of parks. Disneyland and Knott's Berry Farm amusement parks are located northwest of Santa Ana, several kilometers away. Beaches are located around 20 minutes to the south, accessible by the 55 freeway. Huntington Beach and Newport Beach as well as other coastal communities offer shopping, dining, boating, swimming and surfing.

All content from Kiddle encyclopedia articles (including the article images and facts) can be freely used under Attribution-ShareAlike license, unless stated otherwise. Cite this article:
Santa Ana, California Facts for Kids. Kiddle Encyclopedia.