The Santa Ana Zoo at Prentice Park in Santa Ana, California, is a 20-acre (8.1 ha) zoo focusing on the animals and plants of Central and South America. The Santa Ana Zoo hosts more than 270,000 people annually. The zoo opened in 1952 and is owned and operated by the City of Santa Ana. Joseph Prentice donated land for the zoo with the stipulation that the city must keep at least 50 monkeys at all times, the zoo maintains an extensive primate collection with over a dozen species from around the world.

The focus of the Santa Ana Zoo is recreation, education, and conservation. It was previously accredited by the Association of Zoos and Aquariums (AZA).

The zoo is open daily, except for Christmas Day, New Year's Day and Thanksgiving Day . The hours of operation are 10:00 am to 4:00 pm daily but guests may remain in the zoo until 5:00 pm year round.

The property where the zoo sits today went through the ownership of several people during the early 1900s. After the property was foreclosed in 1929 and 1931, Joseph Edward Prentice bought the 19.23-acre (7.78 ha) site. He donated 16 acres (6.5 ha) to the city of Santa Ana in 1949 and stipulated that the zoo have at least fifty monkeys at all times. Construction of the zoo began that year, and it opened on March 8, 1952. A children's zoo was soon built and the Flight Aviary, now known as the Jack Lynch Aviary, was completed in 1962. In 1983, the amphitheater was completed and the zoo gained AZA accreditation. The 1990s had three major events: in 1990, the Flight Aviary was upgraded and renamed the Jack Lynch Aviary; Amazon's Edge opened in 1992; and Colors of the Amazon Aviary opened in 1996. In the 2000s, the Zoofari Express Train Ride opened in 2000, Crean Family Farm opened in 2004, and Tierra de las Pampas opened in 2010.

The Rainforest Exhibit is a small exhibit that represents the Amazon, home to white-faced saki monkeys and green iguanas.

This exhibit, opened on September 1, 1993, replicates a section of the Brazilian rainforest. The exhibit consists of a water moat and a forested riverbank set against a cliff face, with a wooden deck for visitors to see the animals. The species on exhibit include howler monkeys, black-necked swans and crested screamers. 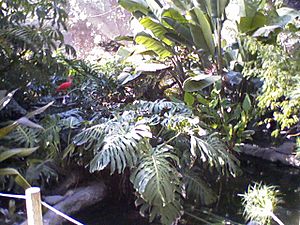 A scarlet ibis on a branch in the aviary

Colors of the Amazon Aviary

The 9,000-square-foot (840 m2) Colors of the Amazon Aviary opened on August 1, 1996. This walk-through aviary displays a variety of South American birds in a lushly planted habitat with meandering streams.

Crean Family Farm opened in July 2004 and focuses on rare, depressed breeds of farm animals. The centerpiece of the complex is a two-story red barn which houses the larger species.

Clouded leopards are displayed on a color panel brochure to adopt an animal, however, they do not reside at the Santa Ana Zoo.

One of the most popular attractions at the Santa Ana Zoo is the Zoofari Express children's train. There are two engines: 1030 and 1036. Both are 14 gauge, 4-4-4 configuration locomotives.

The original 1030 engine was constructed in 1954 by the Hurlbut Amusement Company of Buena Park. Engine 1030 was originally installed at Santa's Village in Sky Forest, California. It operated there continuously for 44 years. When Santa's Village closed in 1998, the Friends of Santa Ana Zoo purchased the entire train and 660 feet (200 m) of original track. The train was then restored by volunteers from Mater Dei High School with the help of Bud Hurlbut. The restored train opened at the Santa Ana Zoo in the spring of 1999. The track length was expanded to 1,850 feet (560 m). Engine 1030 was gas-powered, but in 2006 it was converted to electric power.

Engine 1036 is a new electric-powered locomotive that was installed in 2005, along with new passenger cars.

All content from Kiddle encyclopedia articles (including the article images and facts) can be freely used under Attribution-ShareAlike license, unless stated otherwise. Cite this article:
Santa Ana Zoo Facts for Kids. Kiddle Encyclopedia.