The golden poison frog's skin is densely coated in alkaloid poison, one of a number of poisons common to dart frogs (batrachotoxins), which prevents nerves from transmitting impulses, leaving the muscles in an inactive state of contraction. This can lead to heart failure or fibrillation. Some native people use this poison to hunt by coating darts with the frog's poison. Alkaloid batrachotoxins can be stored by frogs for years after the frog is deprived of a food-based source, and such toxins do not readily deteriorate, even when transferred to another surface.

The golden poison frog is not venomous, but poisonous: venomous animals have a delivery method for the toxin, such as fangs or spines, while poisonous animals and plants do not have a delivery method and rely on transference of the toxin. Like most poison dart frogs, P. terribilis uses poison only as a self-defense mechanism and not for killing prey. The most venomous animal, in terms of LD50, is the inland taipan, although its venom is less potent than the defensive toxins in P. terribilis. 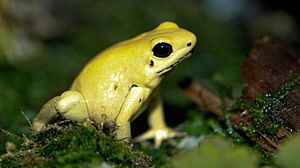 The average dose carried will vary between locations, and consequent local diet, but the average wild P. terribilis is generally estimated to contain about one milligram of poison, enough to kill about 10,000 mice. This estimate will vary in turn, but most agree this dose is enough to kill between 10 and 20 humans, which correlates to up to two African bull elephants. This is roughly 15,000 humans per gram.

The golden poison frog, like most other poisonous frogs, stores its poison in skin glands. Due to their poison, the frogs taste vile to predators; P. terribilis poison kills whatever eats it, except for one snake species, Liophis epinephelus. This snake is resistant to the frog's poison, but is not completely immune.

The poisonous frogs themselves are perhaps the only creatures to be immune to this poison.

Since easily purchased foods are not rich in the alkaloids required to produce batrachotoxins, captive frogs do not produce toxins and they eventually lose their toxicity in captivity.

P. terribilis is the largest species of poison dart frog, and can reach a size of 55 mm as adults, with females typically being larger than males. Like all poison dart frogs, the adults are brightly coloured, but they lack the dark spots present in many other dendrobatids.

The frog's colour pattern is aposematic (which is a warning pigmentation to warn predators of its toxicity). The frog has tiny adhesive disks on its toes, which aid climbing of plants. It also has a bone plate in the lower jaw, which gives it the appearance of having teeth, a distinctive feature not observed in the other species of Phyllobates. The frog is normally diurnal. P. terribilis occurs in three different colour varieties or morphs: 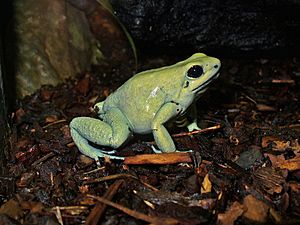 The largest morph of P. terribilis exists in the La Brea area of Colombia, and is the most common form seen in captivity. The name "mint green" is actually rather misleading, as the frogs of this morph can be metallic green, pale green, or white.

The yellow morph is the reason it has the common name golden poison dart frog. Yellow P. terribilis specimens are found in Quebrada Guangui, Colombia. These frogs can be pale yellow to deep, golden yellow in colour. A frog sold under the name "gold terribilis" was once believed to be a deeper yellow P. terribilis. However, genetic tests have proven these frogs to be uniform-coloured morphs of Phyllobates bicolor.

While not as common as the other two morphs, orange examples of P. terribilis exist in Colombia, as well. They tend to be a metallic orange or yellow-orange in colour, with varying intensity.

The main natural sources of food of P. terribilis are the ants in the genera Brachymyrmex and Paratrechina, but many kinds of insects and other small invertebrates can be eaten, specifically termites and beetles, which can easily be found on the rainforest floor. This frog is considered the most voracious of the dendrobatids. 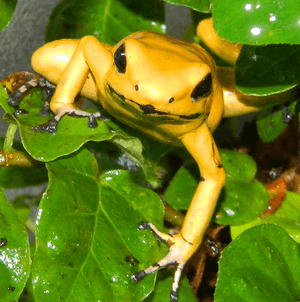 In captivity, the frog is fed with Drosophila fruit flies, cochineals, crickets (Gryllidae), the larvae of various insects, and other small, live, invertebrate foods. An adult frog can eat food items much larger in relation to its size than most other dendrobatids. Tadpoles feed on algae, mosquito larvae, and other edible material that may be present in their nursery. Unlike other Phyllobates spp., P. terribilis tadpoles are somewhat versatile feeders.

Poison frog and the indigenous peoples

P. terribilis is a very important frog to the local indigenous cultures, such as the Choco Emberá people in Colombia's rainforest. The frog is the main source of the poison in the darts used by the natives to hunt their food.

The Emberá people carefully expose the frog to the heat of a fire, and the frog exudes small amounts of poisonous fluid. The tips of arrows and darts are soaked in the fluid, and keep their deadly effect for over two years. 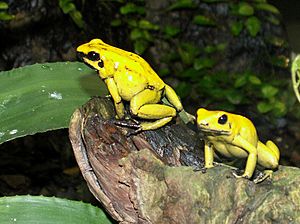 P. terribilis is considered to be one of the most intelligent anurans. Like all poison dart frogs, captives can recognize human caregivers after exposure of a few weeks. They are also extremely successful tongue hunters, using their long, adhesive tongues to catch food, and almost never miss a strike. This success at tongue-hunting implies better brainpower and resolution of eyesight than some other frogs. Golden poison frogs are curious, bold, and seemingly aware of the fact that they are next to invulnerable, making no attempt to conceal themselves and even flaunting their striking colours to intimidate potential predators.

Golden poison frogs are social animals. Wild specimens typically live in groups of four to seven (average six); captive frogs can be kept in groups of 10 or even 15, although groups that rise past that number are extremely susceptible to aggression and disease. Like all poison dart frogs, they are rarely aggressive towards members of their own species; however, occasional minor squabbles may occur between members of the group. Being immune to their own poison, golden poison frogs interact constantly with each other. They communicate not only with their calls, but also with gestures. Push-up movements are a sign of dominance, while lowered heads seem to signal submission.

P. terribilis frogs are dedicated parents. The golden poison frogs lay their eggs on the ground, hidden beneath leaf litter. Once the tadpoles emerge from their eggs, they stick themselves to the mucus on the backs of their parents. The adult frogs carry their young into the canopy, depositing them in the pools of water that accumulate in the centre of bromeliads and water-filled tree holes. The tadpoles feed on algae and mosquito larvae in their nursery. After metamorphosis is complete, parent frogs lead the froglets to an existing group.

All content from Kiddle encyclopedia articles (including the article images and facts) can be freely used under Attribution-ShareAlike license, unless stated otherwise. Cite this article:
Golden poison frog Facts for Kids. Kiddle Encyclopedia.