The cochineal (Dactylopius coccus) is a scale insect in the suborder Sternorrhyncha, from which the natural dye carmine is made.

The insect lives in tropical and subtropical South America, Mexico and Arizona. Its larvae eat cacti in the genus Opuntia, feeding on plant moisture and nutrients. These insects are found on the pads of prickly pear cacti, then are brushed off and dried.

Carminic acid, typically 17-24% of dried insects' weight, can be extracted from the body and eggs, then mixed with aluminium or calcium salts to make carmine dye, also known as cochineal. Today, carmine is primarily used as a colorant in food and in lipstick.

The carmine dye was used in Central America in the 15th century for coloring fabrics and became an important export good during the colonial period.

Health fears over artificial food additives, however, have renewed the popularity of cochineal dyes, and the increased demand has made cultivation of the insect profitable again, with Peru being the largest exporter. 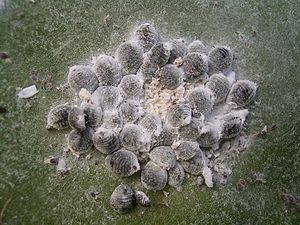 A cluster of females

Cochineal insects are soft-bodied, flat, oval-shaped scale insects. The females, wingless and about 5 mm (0.20 in) long, cluster on cactus pads. They penetrate the cactus with their beak-like mouth-parts and feed on its juices, remaining immobile unless alarmed.

The nymphs secrete a waxy white substance over their bodies for protection from water loss and excessive sun. This substance makes the cochineal insect appear white or grey from the outside, though the body of the insect and its nymphs produces the red pigment, which makes the insides of the insect look dark purple. Adult males can be distinguished from females in that males have wings, and are much smaller.

A nopal cactus farm for the production of cochineal is traditionally known as a nopalry. The two methods of farming cochineal are traditional and controlled. Cochineals are farmed in the traditional method by planting infected cactus pads or infesting existing cacti with cochineal's and harvesting the insects by hand. The controlled method uses small baskets called Zapotec nests placed on host cacti. The baskets contain clean, fertile females that leave the nests and settle on the cactus. In both cases, the cochineal's must be protected from predation, cold, and rain.

The complete cycle lasts three months, during which time the cacti are kept at a constant temperature of 27 °C (81 °F). At the end of the cycle, the new cochineal's are left to reproduce or are collected and dried for dye production. To produce dye from cochineal's, the insects are collected when they are around 90 days old. Harvesting the insects is labor-intensive, as they must be individually knocked, brushed, or picked from the cacti and placed into bags.

Opuntia species, known commonly as prickly pears, were first brought to Australia in an attempt to start a cochineal dye industry in 1788. Captain Arthur Phillip collected a number of cochineal-infested plants from Brazil on his way to establish the first European settlement at Botany Bay, part of which is now Sydney, New South Wales.

At that time, Spain and Portugal had a worldwide cochineal dye monopoly, and the British desired a source under their own control, as the dye was important to their clothing and garment industries; it was used to color the British soldiers' red coats, for example.

The attempt was a failure in two ways: the Brazilian cochineal insects soon died off, but the cactus thrived, eventually over-running about 100,000 sq mi (259,000 km2) of eastern Australia. The cacti were eventually brought under control in the 1920's by the deliberate introduction of a South American moth, Cactoblastis cactorum, the larvae of which feed on the cactus.

Carminic acid is extracted from the female cochineal insects and is treated to produce carmine, which can yield shades of red such as crimson and scarlet. The insects are processed by immersion in hot water or exposure to sunlight, steam, or the heat of an oven. Each method produces a different color. It takes about 80,000 to 100,000 insects to make one kilogram of cochineal dye. 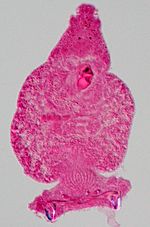 Cochineal use in histology: Carmine staining of a monogenean (parasitic worm)

Traditionally, cochineal was used for coloring fabrics. During the colonial period, with the introduction of sheep to Latin America, the use of cochineal increased, as it provided the most intense color and it set more firmly on woolen garments. In general, cochineal is more successful on protein-based animal fibers (including silk) than plant-based material.

For the past several centuries, it was the most important insect dye used in the production of hand-woven oriental rugs. It was also used for painting, handicrafts, and tapestries. Cochineal-colored wool and cotton are important materials for Mexican folk art and crafts. Cochineal is used as a fabric and cosmetics dye and as a natural food coloring. Cochineal is one of the few water-soluble colorants to resist degradation with time.

Carmine is considered safe enough for use in eye cosmetics. A significant proportion of the insoluble carmine pigment produced is used in the cosmetics industry for hair- and skin-care products, lipsticks, face powders, rouges, and blushes. The pharmaceutical industry uses cochineal to color pills and ointments.

All content from Kiddle encyclopedia articles (including the article images and facts) can be freely used under Attribution-ShareAlike license, unless stated otherwise. Cite this article:
Cochineal Facts for Kids. Kiddle Encyclopedia.